Does Karnataka Experiment Sow The Seed Of A Future National Coalition For 2019?

Will the newfound bonhomie between Congress, JD(S) last? 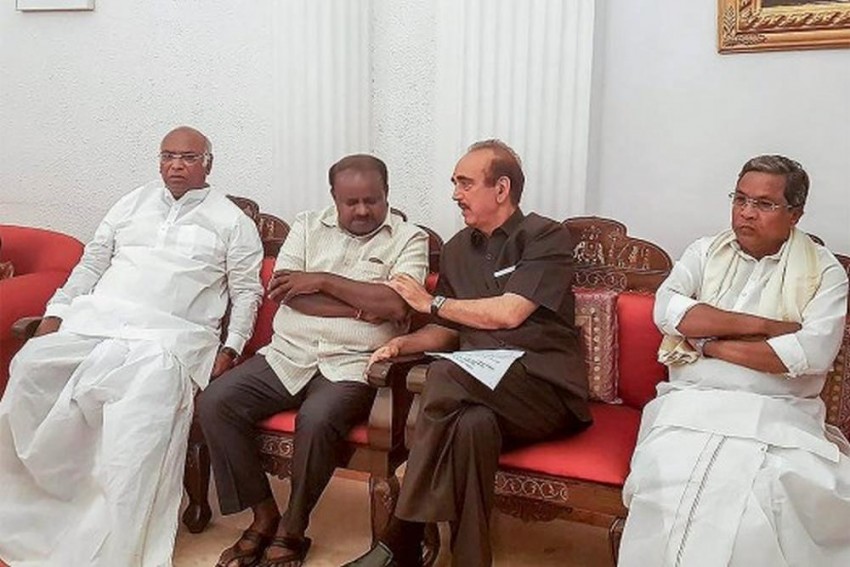 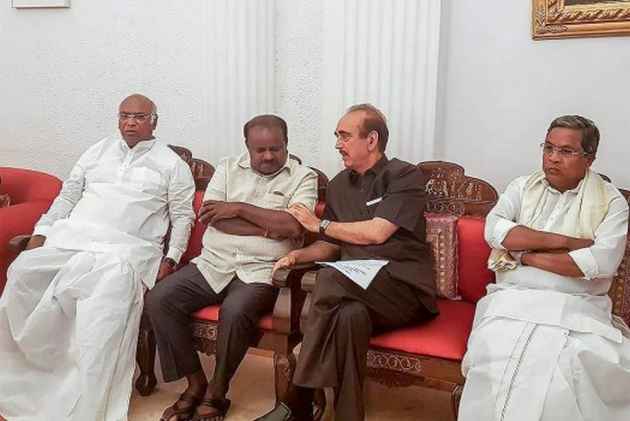 On the face of it, the newfound bonhomie between the Congress and the Janata Dal (Secular) in Karnataka seems set to endure.  But, below the surface, there are long-held animosities and personal rivalries that the leadership of the two parties would need to surmount to make the coalition last.

As if the contradictions within the coalition are not enough, the BJP recovering from the disappointment of not making it to power, will be watching closely to grab any opportunity to unseat the Congress-JD(S) combine.

For the coalition, what exudes hope is the fact that die-hard rivals like chief minister aspirant H.D. Kumaraswamy and the Congress go-to politician D K Shivakumar have publicly made it abundantly clear that they intend to make it work.   Until now, the two have ensured that the optics look good.  They held each other’s arms and raised it high to show they are friends again.

But the real strength of the coalition comes from the fact that national—level leaders want the alliance to click.  Former prime minister H.D. Deve Gowda, Congress President Rahul Gandhi and his mother Sonia Gandhi have staked their joint political experience and come up with the tactics to form the coalition.  In this game they have the total backing of leaders like Mamata Banerjee, Mayawati,  Tejashwi Yadav and all the others who see in the Karnataka experiment the seed of a future national coalition for the 2019 general elections.

In a sense,  that the Karnataka coalition has even been possible is because two “Davids” have successfully taken on the BJP “Goliath”,  which has ruthlessly steam rolled all opposition in over a  20 states.  That Kumaraswamy is in Delhi meeting the Congress leadership to discuss the modalities of government formation is a clear indication that everyone in the non-BJP camp means business.

However, this is just the beginning. The legislators of both the Congress and the JD(S) have all been housed in resorts or top-star hotels until the vote of confidence later this week.  But then, once that is done,  the legislators go back to their homes and constituencies where they will come under the intense pressure of the BJP satraps to change their minds and support the saffron party, if not join it.

The Bihar experience, where the Rashtriya Janata Dal of Lalu Prasad Yadav and the Janata Dal (United) of Nitish Kumar came together but unravelled in just two years is a factor that the Karnataka coalition will be aware of.  But, beyond a point, unless the legislators of the two parties appreciate the concerns of their leadership, have a long-term political vision and are immune to lucre (of any kind), it may be difficult for the coalition to last.

However, specific political situations bring out the unexpected in people and associations.   This means that the JD(S) and Congress leadership need to convince their flock to stick together and figure out ways to take on the BJP “honey-traps” well after the vote of confidence is over and when the media is no longer watching the legislators as closely as it is now.

(The writer is an independent journalist based in Bangalore)