Congress leader Randeep Singh Surjewala on Tuesday demanded that the alleged irregularities in an HPSC recruitment be probed by a special investigation team that is monitored by the chief justice of the Punjab and Haryana High Court. 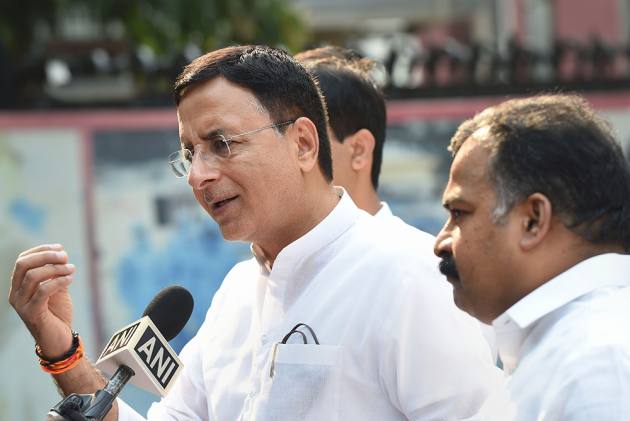 He also claimed that the alleged scam in recruitment -- for dental surgeons -- by the Haryana Public Service Commission (HPSC) is "bigger than the Vyapam scam".

The Vyapam scam refers to irregularities in exams held by the Madhya Pradesh Professional Examination Board, also called Vyavasayik Pareeksha Mandal or Vyapam, for admission in professional courses and state services.

Addressing reporters on the Haryana recruitment issue, Surjewala, who is also a Congress general secretary, said, "The arrest of HPSC Deputy Secretary Anil Nagar and others has made it clear that it is the country's biggest job scam."

"This is bigger than the Vyapam scam," he said.

Last week, Nagar and two others were arrested by the State Vigilance Bureau for allegedly manipulating marks of candidates who appeared in the written examination for recruitment of dental surgeons, conducted in September.

Nagar is alleged to have demanded and accepted illegal gratification worth crores of rupees. Surjewala said that claims of merit, transparency and no "kharchi parchi (bribe, favouritism)" made by the Manohar Lal Khattar government in Haryana have fallen flat.

In addition to the latest scam, there have been 32 more paper leak cases during the last seven years of the BJP-led government in the state, he claimed. This government is playing with the future of the youth, Surjewala said.

"We demand an investigation by an SIT (in the latest scam) directly monitored by the chief justice of the Punjab and Haryana High Court," he said.

The Congress leader said that the HPSC and the Haryana Staff Selection Commission (HSSC) should be disbanded immediately as these have become centres of recruitment scams and new bodies should be formed.

"We also demand that the HPSC and the HSSC be disbanded without delay so that an independent inquiry can be conducted," he said. Before any new recruitment, a panel of experts should be formed and their recommendations should be made public before being implemented, Surjewala said.

"We also demand that Chief Minister Manohar Lal Khattar apologise to the youth of Haryana, who have been befooled by this government for the last seven years in the name of merit and transparency in recruitments," he said.

He alleged that the HPSC has become "Haryana Posts Sales Counter" under the BJP-JJP government in the state. "We have been continuously raising our voice against the injustice with the youth and all-round corruption prevailing in Haryana job recruitments," he said.

"While jobs are being sold, papers are being leaked, blank OMR sheets are getting filled after exams and roll numbers are being arranged one after the other to give benefit to favourite candidates, and whatever happens, Khattar sahab keeps making claims of giving jobs on merit and transparency in recruitments," Surjewala said.

The Congress leader asked who had given the responsibility of management and maintaining secrecy of all important recruitments to a junior state service officer like Nagar, who had joined service only four years back, while bypassing the IAS level HPSC secretary.

The Khattar government has virtually privatised both the recruitment commissions and conduct of examinations in the name of improving recruitment, he alleged.