Actresses Shefali Shah and Kirti Kulhari come up with stellar performances, but is that enough to make you want to drop everything and watch ‘Human’? Read the full review here to find out. 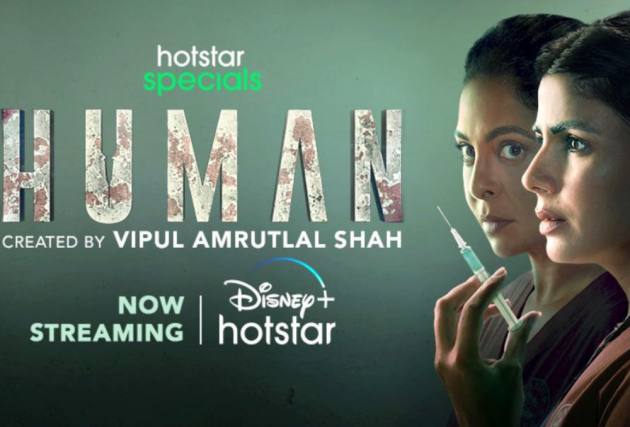 What’s It About
The world of medical science is one that few people comprehend fully. 'Human', a show that explores uncharted territory, delves into the shadowy underbelly of a society that views humans as guinea pigs. Not just that, they even utilise them to test their new-age creations. What follows next is a botched-up experiment that unleashes a can of worms across the entire medical profession. It revolves around a pharma giant that is using India’s lax clinical trial rules to fast track the development of a new drug, despite lethal side effects. Meanwhile, 35-year-old Dr. Saira Sabharwal (played by Kirti Kulhari) lands a dream job in Bhopal’s premiere hospital under the mentorship of the iconic 45-year-old Dr. Gauri Nath (played by Shefali Shah). Saira grows under Gauri’s tutelage and as the two women start to form a deep bond over their commitment to the medical cause. However, a shocking discovery throws their life into chaos as their story becomes intertwined with that of a young migrant worker, Mangu, who is just 20 years old, and manages to wreak havoc on the medical system. Will good sense prevail in the minds and hearts of the doctors? Or will the medical system just become a joke and bag of deceit for everyone? Well, you’ll have to watch the show to find out.

What’s Hot
‘Human’ is a brave attempt. There’s no doubt about that. Showing the ills of a profession that is considered to be next to god, is just like trying to dissuade you of your religion. The writing by Mozez Singh, Ishani Banerjee, and their team is the highlight of the show. They have very well shown the hierarchy that exists in society. In trying to showcase a fictional tale of illegal drug tests, they’ve actually touched upon quite a number of societal evils. They’ve addressed them just as they would be in real life, and that’s commendable.

Shefali Shah is stellar. Comes up with another brilliant performance. It’s a shame that we don’t get to see her that often onscreen, but she lights up every frame that she is in. Whether it’s a powerful speech or a moralistic stand or even an intimate shot, she wins you over with the way she moulds herself into the character. You’ll not see Shefali Shah as you’ll be unable to see anything beyond Dr. Gauri Nath.

Kirti Kulhari is good as always. She manages to draw from the great performance of Shah and come up with a trump card of her own. Every nuance she brings into the role takes the show notches higher.

Vishal Jethwa is the surprise package, and he is going to blow you away. His performance is an apt example of what a character can do to the flow of the entire story despite having a limited screen space.

The cinematography by Sirsha Ray is intriguing. The way the symmetry has been matched by showing sordid poverty on one side and rosy affluence on the other with equal aplomb is brilliant. It helps to keep the mystery alive till the very end.

What’s Not
Seema Biswas’ character is so good and laden with a mystery that you’re left cringing as to why there is not that much focus on her character.

The storyline sags a bit in the middle where you’re wanting to know what happens next, but are kept hanging till the climax. The storyline in the middle could have been kept a bit tauter, so as to keep you hooked even in those parts. It’s not good to keep the audience waiting that long for such a good climax. It could have made the show a far better experience.

There are too many intricacies shown when it comes to the medical aspects of the show, which up to a point is good, but if you are not that much into the medical profession, you’re just pushing the audience to reach for their cell phones and check if they’ve got any new messages.

The major drawback of a series like this is its fleeting changes in believability. While there are some things which make you say, ‘Yes, I’ve seen this happen’, but on the very next scene you’re left questioning yourself like ‘Come on, this is too far-fetched to happen in real-life.’ Cinematic liberties are okay in fictional tales, but in a story like ‘Human’, where you’re literally trying to humanize the entire story, it feels awkward to see some things which seem presumably unbelievable.

Lastly, the editing of the entire show could have been crisper. A bit of 5-7 mins cut from each episode could have made this the best show of this month. Sadly, it misses the margin by quite a bit.

Verdict
‘Human’ tries to enunciate the collateral damage due to fast-tracked drug trials for financial gains. The tale sounds gripping, but besides the start and end, the edge-of-the-seat factor seems missing. Touching on compelling themes like the value of human life, medical malpractice, class divide, and ramifications of a fast-paced medical science, is all good, but when you’re somewhat going into the improbable zone, you tend to lose a lot of brownie points there. However, it’s still better than anything else that’s released this weekend. ‘Human’ is indeed a decent One Time Watch. I am going with 3 stars.