"I have no desire to end up like Gauri Lankesh or Afrazul Khan. Actually, more than myself I worry for the safety of my family." 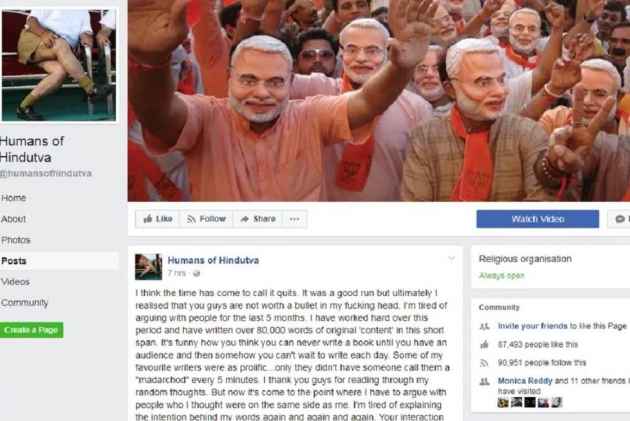 Popular Facebook parody page Humans Of Hindutva-- known for satirical posts on diverse issues ranging from politics to social issues-- on Thursday decided to shut the page after receiving alleged death threats. In a post on a personal blog Satyansh, the admin announced his decision to delete the page calling it a victory of "Hindutva in this David Vs Goliath fight."

Making it clear that the page was never banned or mass reported by the social networking site, the admin said that he is quitting on his own accord."I have no desire to end up like Gauri Lankesh or Afrazul Khan. Actually, more than myself I worry for the safety of my family. I hope those who threatened me consider this as a victory and leave us alone. I have deleted the HOH page and will delete this website soon. Congratulations to Hindutva on winning this David vs. Goliath fight," read the post.

"I have recently received some threats to my life which I can’t take lightly. I am outnumbered, live in a BJP state and come from a middle-class family with no political or police connections.

"As for those who were kind enough to lend me their ears for the last eight months, I’d like to wish you all a Happy New Year. Cheers and alvida. Thanks for giving me some of your time." A current screenshot of the page shows that it was deleted by its admin.  When mass reported by its users, Facebook lets the people know that the Page was removed following a report as it "violated its Community Standards."

In a retaliation to his critics who alleged that the admin did not delete the page himself instead it was taken down by the Facebook, he also posted a screenshot of his page that was due for deletion on his blog.  Facebook gives a time of 14 days to roll-back the decision if the admin changes their mind.

Inspired by Brandon Stanton's Humans Of New York, HOH had over 118,700 followers in a very short span of time. Facebook, in May, had once blocked the page after receiving mass complaints against the page. The page's popular jibes included those on news-anchor Arnab Goswami, Prime Minister Narendra Modi, author chetan Bhagat and on issue pertaining to cow slaughter.

Earlier in September, the parody page had called it quits after receiving similar threats. The admin had reportedly expressed his anguish after being misunderstood repeatedly. "I’m tired of explaining the intention behind my words again and again and again," the admin wrote in a message saying it was not worth taking bullet for.

"I thank you guys for reading through my random thoughts. But now it’s come to the point where I have to argue with people who I thought were on the same side as me," a Facebook post from the account read.

The page however made a comeback after receiving support on Facebook and decided to continue with sarcastic takes on the right-wing.