While the current "hot spots" of hunger and malnutrition are in South Asia and sub-Saharan Africa, India ranked 24th on the list of countries with the highest levels of hunger. Sudan ranked 25th. For most people, Sudan conjures up images of ethnic cleansing in its western Darfur province, stark poverty and hunger. But in what will undoubtedly come as a rude shock to India, a Global Hunger Index developed by the International Food Policy Research Institute says the problem of malnutrition is more severe in India than in the African nation.

While the current "hot spots" of hunger and malnutrition are in South Asia and sub-Saharan Africa, India ranked 24th on the list of countries with the highest levels of hunger. Sudan ranked 25th.

In India child malnutrition was linked to the low status of women in society. In South Asia "women, if they eat last in the family after all the men have eaten, will end up being malnourished" and so they give birth to undernourished children, said Doris Wiesmann, the IFPRI researcher who developed the index, in a conference call with reporters. "It has been observed that the women who have a say in the family, allocate more resources to their children’s nutritional needs. Men have other priorities," she added.

Ms. Wiesmann said there had been a "great improvement" in South Asia largely due to the Green Revolution but it is still a "hot spot" of malnutrition. South Asia has higher levels of child under-nutrition than sub-Saharan Africa, but sub-Saharan Africa has higher rates of child mortality, the study finds. She noted a lack of political will to combat hunger and said governments must focus on agriculture, education and health care policies.

Of the 12 countries that ranked worst on the Global Hunger Index, nine were affected by civil wars or violent conflicts. In these countries "soldiers hijack food aid and land that is mined cannot be farmed," explained Ms. Wiesmann. Eritrea, Angola, Burundi, Cambodia, and Ethiopia were most seriously affected by conflict and hunger.

The Global Hunger Index provides a particularly comprehensive measure of global hunger because it ranks countries on three leading indicators and combines them into one. "Alone, each indicator has limitations, but put together, they give us a much more complete picture of the state of hunger around the world," Ms. Wiesmann said. The three indicators are: child malnutrition, child mortality, and estimates of the proportion of people who are calorie deficient.

"By combining these indicators, the index considers the food supply situation of the total population and takes into account the special vulnerability of children to nutritional deprivation. It also reflects the most tragic consequence of under nutrition, which is death," said Marie Ruel, director of IFPRI’s Food Consumption and Nutrition Division. 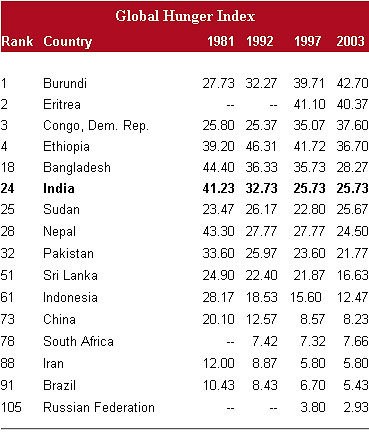 The Global Hunger Index has been calculated for 1981, 1992, 1997, and 2003. The latest round ranks 97 developing countries and 22 countries in transition. The index does not include highly industrialized countries, as well some developing countries where data is not available, such as Afghanistan, Iraq, and Somalia. Scores have improved in South Asia and in most other parts of Asia since 1981, despite the fact that many countries in this region still have high levels of hunger.

"Another value of the index is to demonstrate which countries have not been able to use their available economic resources effectively in reducing under nutrition," Ms. Wiesmann noted. "High income inequality is one of the factors that causes countries to have higher levels of hunger and under nutrition than would be expected based on the gross national income per capita. Countries with high HIV infection rates also scored poorly on the index relative to their level of economic development, highlighting the links between AIDS and hunger."

Joachim von Braun, IFPRI director general, said the purpose of the Global Hunger index was to mobilize the political will to speed up urgently needed progress in the fight against hunger in those countries that rank the worst. Crediting the adoption of the Millennium Development Goals, he said hunger and poverty have climbed to the top of the global development agenda, with the target of cutting hunger in half by 2015. "But we cannot be satisfied merely to cut it in half. Hunger must be eradicated completely," he added.