The NWS said that the severe weather conditions were "beyond anything experienced." 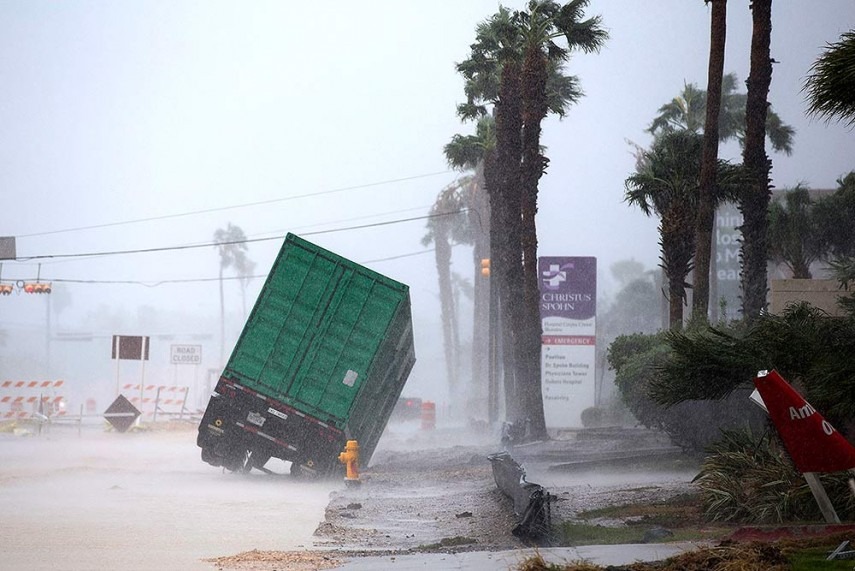 Harvey, the most powerful hurricane to hit the US in 13 years, left a trail of destruction as it swept through Texas today, pummelling the region with heavy rains and claiming at least five lives since making landfall on the US' Gulf Coast.

After a night of flash flood and tornado watch, Texas' largest city Houston woke up to a catastrophic morning, more life-threatening flash flooding, and non-stop heavy downpour as rescuers answered desperate calls for help all along the ravaged coastline.

The actual toll from Harvey remains unclear as rescuers were still trying to reach people stranded across the region.

Houston's Bush Intercontinental Airport announced it has cancelled all commercial flights today. The city's only other airport earlier stopped all flights due to flooded runways.

It dumped more than 20 inches of rain in the Houston area, causing "life-threatening catastrophic flooding" in southeastern Texas, The National Hurricane Centre reported.

President Donald Trump this morning tweeted his support for the rescue workers. "Great coordination between agencies at all levels of government," he said. "Continuing rains and flash floods are being dealt with. Thousands rescued."

"I will be going to Texas as soon as that trip can be made without causing disruption. The focus must be life and safety," he said in another tweet.

Earlier, authorities had reported two deaths that appeared to be related to the storm, one in the hart-hit coastal city of Rockport and another in Houston. The first fatality in Rockport was due to a house fire during the storm.

Though there were multiple hazards present across the area, the greatest threat to life and property remained the ongoing extreme rainfall and subsequent flash flooding.

Tornadoes spawned by Harvey damaged more than 50 homes in Fort Bend County, struck a commercial centre near Katy and tore through Cypress, while parts of the Houston region were evacuated ahead of record river floods.

"It's catastrophic, unprecedented, epic - whatever adjective you want to use," said Patrick Blood, a NWS meteorologist. "It's pretty horrible right now."

Forecasters said Harvey's onslaught was just the beginning. The National Hurricane Centre (NHC) in Miami warned "catastrophic flooding" was likely to occur in the days ahead.

Harvey bombarded the stretch of the Texas Gulf Coast with home-ripping winds and torrential rains. More than 300,000 people were without power after utility poles were knocked to the ground.

Parts of Harris County, which includes Houston, have seen more than 20 inches of rain in the past 24 hours. The streets in Houston were drenched and deserted last night, and houses crushed, gas stations torn to shreds, road signs blown away.

Emergency responders completed more than 1,000 high-water rescues during the night. "Travel across the area is severely hampered, if not impossible," said an announcement from the Weather Service.

"This is serious... It is important that people stay off the roads," Houston Mayor Sylvester Turner said. He said the city is prepared for a "major water event".

Some areas could get up to 100 centimetres of rain.

"Rainfall of this magnitude will cause catastrophic and life-threatening flooding," the NHC said.

Texas Governor Greg Abbott has said he would activate 1,800 members of the military to help with the state-wide clean-up while 1,000 people would conduct search-and-rescue operations.

At a recreational vehicle sales outlet in Rockport city, a dozen vehicles were flipped over and one had been blown to the middle of the street.

As many as six million people were believed to be in Harvey's path as it is the heart of America's oil-refining operations. The storm's impact on refineries has already pushed up gasoline prices.

The US Environmental Protection Agency eased rules on gasoline specifications late on Friday to reduce shortages.

While thousands fled the expected devastating flooding and destruction, many residents stayed put in imperilled towns and stocked up on food, fuel and sandbags.

Francisco Sanchez, of the Harris County Emergency Management Office, said the storm would be around for a while.

South of the city, about 4,500 inmates were evacuated from three state prisons in Brazoria County in the wake of the water level rising in the nearby Brazos River.

The turbulent weather extended into southern Louisiana, where motorists were cautioned about high water, road hazards, high winds and tornadoes.