Hurling 210 kilometres per hour winds, Irma struck Florida Keys as it barrelled towards the US state's west coast 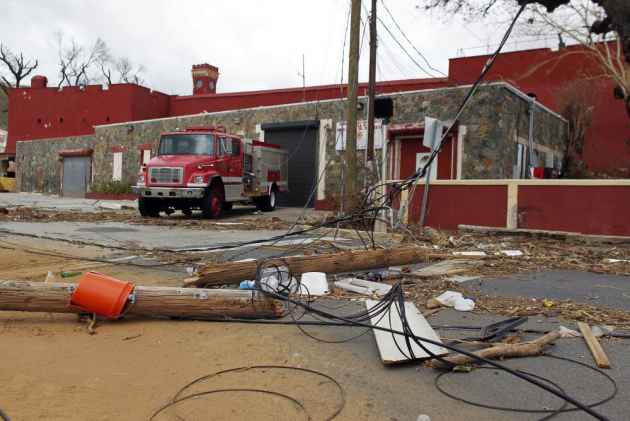 Hurricane Irma made landfall on Florida's southern islands today and claimed three lives as millions of people, including thousands of Indian-Americans, evacuated the state in the wake of the storm that left a trail of death and destruction across the Caribbean.

Hurling 210 kilometres per hour winds, Irma struck Florida Keys as it barrelled towards the US state's west coast where millions of people have evacuated turning many places into ghost towns.

Irma later weakened slightly to a Category Three storm from Category Four as it moved past the Keys, packing maximum winds of up to 195 kilometres per hour.

"There is imminent danger of life-threatening storm surge flooding along much of the Florida west coast, including the Florida Keys, where a storm surge warning is in effect," the hurricane center said.

"The threat of catastrophic storm surge flooding is highest along the southwest coast of Florida, where 10 to 15 feet of inundation above ground level is expected. This is a life-threatening situation," it said.

As the Category four storm bore down on Florida this morning, at least three deaths were reported in the state.

A man in Monroe County, which encompasses Key West, was killed after he lost control of a truck that carried a generator as winds whipped at tropical-storm strength, officials said.

More than 6.3 million people were told to evacuate Florida, with warnings of a huge storm surge that would be "life-threatening" to anyone in its path.

Irma has already devastated parts of the Caribbean with over 25 deaths. About 60 Indian nationals are being evacuated from the vacation island of St Martin in the Caribbean.

The eye of the Category 4 storm was 24 kilometres southeast of Key West.

The eye is a region of mostly calm weather at the centre of strong tropical cyclones. The eye of a storm is a roughly circular area, typically 30–65 km in diameter.

Around 120,000 Indian-Americans reside across Florida while thousands of them live in the now-dangerous zones of Miami, Fort Lauderdale and Tampa.

Indian-Americans in Atlanta and neighbouring areas today opened up their homes for their friends, families and community members from Florida, as catastrophic hurricane Irma made landfall on the state's southern islands.

Miami and Tampa appeared "ghost towns" as nervous residents, many of whom struggled to cope with abandoning their homes, moved to safer places following mandatory evacuation notices.

The National Weather Service (NWS) said Irma regained strength as a Category 4 storm - after being downgraded to Category 3 for more than 12 hours - as it moved to Florida.

The Indian Embassy in the US has opened a round-the-clock helpline number and rushed senior diplomats to Atlanta to lead relief efforts for Indian-Americans stuck in the region.

Embassy officials said India's Ambassador to the US Navtej Sarna was closely monitoring the situation.

"Atlanta is fully prepared to take care of evacuees from Florida. Some have already reached. Consulate is on call 24x7," it said in another tweet.

Almost the entire Florida was under hurricane warning.

US President Donald Trump reviewed preparedness with his cabinet colleagues at Camp David in Maryland. He asked federal and state agencies expedite assistance to affected areas.

"This is a storm of enormous destructive power, and I ask everyone in the storm's path to pay heed to all instructions from government officials," Trump said.

Florida Governor Rick Scott asked people to move out of the danger zones as soon as possible. "The state has never seen anything like this. The storm's surge can kill you."

The US Army has so far deployed more than 7,400 soldiers and US Army Corps of Engineers civilians on the US Virgin Islands, Puerto Rico, and the continental US.

The Pentagon said the Army has over 140 aircraft, 650 trucks, 150 boats prepared along with additional resources on standby.

"Unfortunately, there is no way the US is going to avoid another catastrophic weather event," AccuWeather president Joel N Myers said.

"[It will be] the worst single hurricane to hit Florida since Hurricane Andrew in 1992," Myers said.

The Indian Friends of Atlanta -- in association with the Consulate-General of India, the Gujarat Samaj Atlanta and the Hindu Temple of Atlanta -- have operationalised three shelters.

They were preparing to open more shelters and provide food. Several Indian businesses have started contributing to relief efforts.

The Indian Embassy in Venezuela tweeted the helpline number in Aruba, a tiny Dutch Caribbean island off the coast of Venezuela, for the situation in Sint Maarten: 00297-593- 2552.

The Indian Embassy in the Netherlands said countrymen affected by Irma can reach them on: 0031643743800.