Violence broke out in the Osmania University campus once again. This time though, the issue wasn’t Telangana. A " beef festival" organised by Dalit groups to assert their “ideological, cultural and fundamental rights” suddenly erupted in clashes. Students belonging to the Akhil Bharatiya Vidyarthi Parishad tried to force their way into the venue and began pelting stones. Within minutes, a food festival venue turned into a violent melee. Teargas shells and a lathicharge did not quell the clashing groups. Protests intensified after a student was stabbed and there is now a demand for the Osmania University Vice-Chancellor to step down. An attempt to divide various student groups fighting for Telangana is one conspiracy theory being floated around the beef festival fiasco. With the TRS lying low of late, the BJP is said to have increased its hold on the campus. What started off as a means to demand beef on the menu has now turned into a fresh headache for the police who assumed that peace had returned to the University campus.

Chief Minister Kiran Kumar Reddy’s whine wagon rolls on. In Visakhapatnam recently to inaugurate a government programme, Kiran Kumar wondered if he’d stepped into the CM’s chambers at an inauspicious time. “Ever since I’ve become CM, there have been elections every three months in the state, be it at the behest of Jaganmohan Reddy or the TRS. Maybe the muhurat of my assuming office was inauspicious,” said Kiran Kumar ruefully at the public programme. Kiran Kumar says that while the TRS is trying to split the State, Jaganmohan Reddy was trying to break up the Congress party. Congress leaders feel that Kiran Kumar’s words do little for the confidence of Congress cadre who are already fearing the worst in the forthcoming bypolls in 18 Assembly segments.

And if Kiran Kumar’s cup of political woes overflows, the judiciary isn’t exactly happy with his government either. The High Court has issued directions to the state government asking it to explain the need to transfer IPS officer K Sreenivas Reddy who was spearheading the ACB probe in the Rs 12,000 crore liquor scam. Sreenivas Reddy who was heading the special investigation team of the ACB has been promoted and posted as IG, Coastal Security, in Visakhapatnam. The government has time till April 27 to file a reply on the transfer. The HC has also directed the government not to transfer any more officials out of the Anti-Corruption Bureau without informing it first.

TRS chief K Chandrasekhar Rao’s daughter Kavitha appears all set for a political entry if the buzz in party circles is to be believed. Kavitha recently observed a 48-hour fast demanding the installation of an Ambedkar statue on the premises of the Assembly. Kavitha has so far concentrated on her NGO Telangana Jagruthi Foundation and non-political activities such as Telangana-related food, heritage and cultural festivals. Her focus on the Dalit cause will aid KCR who has been facing flak from some Dalit groups who allege he is insensitive to their lot. Kavitha’s fast has tipped the scales in TRS’ favour again. It is likely that Kavitha may contest the Nizamabad Lok Sabha seat in 2014, say party sources. The seat is currently held by Madhu Yaskhi Goud of the ruling Congress. Kavitha’s brother K T Rama Rao who is an MLA from Sircilla is seen as the suave, non-controversial face of the party. An able speaker, KTR has been doing a lot of grassroot level work for the TRS in Telangana. If Kavitha does get into the political battlefield, KCR’s political future would be doubly strengthened. 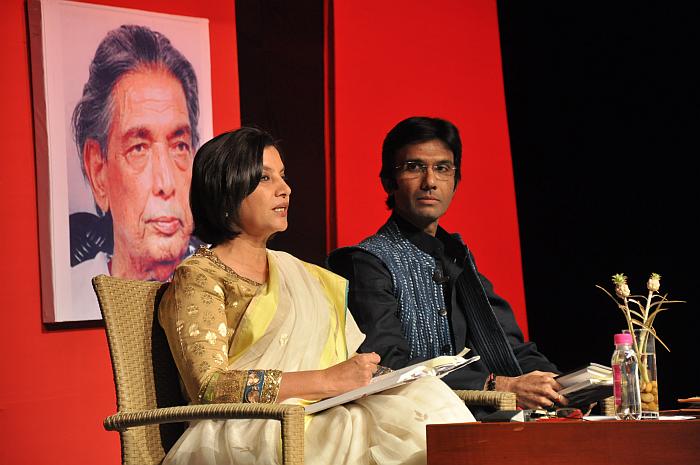 Hyderabadis love their shayari, especially so when it is Kaifi Azmi’s and is being recited by his actor-daughter Shabana Azmi. Kaifiyaat, a collection of Urdu writings and poems of revolutionary poet Kaifi Azmi, was unveiled in the city recently in an event organized by the Qadar Ali Baig Theatre Foundation. Shabana, who is born in Hyderabad, won over the audience with her sometimes witty, at times intense, recollections about her father.

“Kaifi saab had a serious face so people did not know much about his sense of humour. He could rattle off extremely funny lines with a straight face. As a lyricist, he used to face the problem of having the music composed first and told to fit in lyrics accordingly. To this my father would say, ‘this is a bit like having the grave dug up first and fitting the dead body in later. At times, the head might jut out and at other times the limbs. Luckily, I was able to fit my bodies into the graves. That’s where my secret as a lyricist lay’.”

Shabana spoke about the romance between her dad and mother Shaukat. Kaifi Azmi once wrote a letter in blood to emphasise his love for Shaukat. “But my grandfather who was well-off unlike Kaifi saab told my mom not to get excited as there was every possibility that the letter was written with goat’s blood,” Shabana recalled, smiling. There were tears in every eye as Shabana read out Kaifi Azmi’s revolutionary poem Aurat:

The audience seemed to love one particular line from the poem:

Shabana sought to remind listeners that the poem which is ahead of its times even today was written 65 years ago.

Theatre revivalist Mhd Ali Baig touched upon Kaifi’s romantic side when he read out Iqfa-e-Mohabbat and Tum. Shabana spoke of the need for communal harmony and empowerment of women as an essential part of progress.