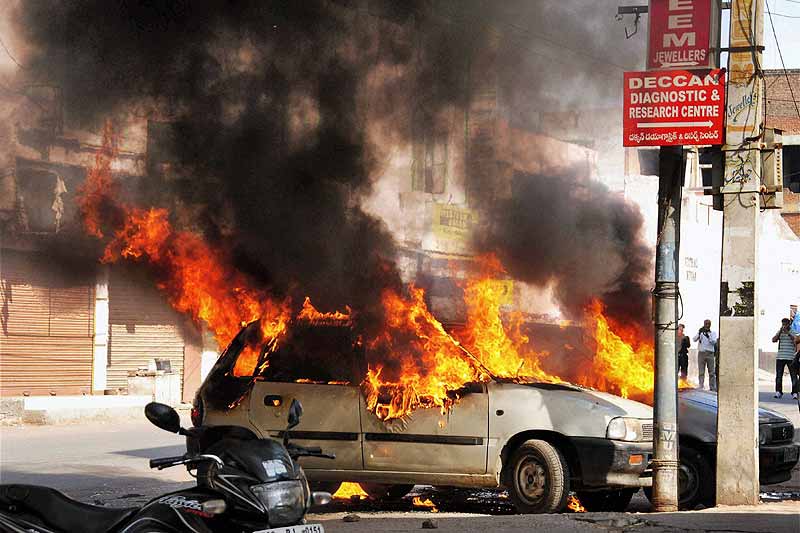 Violence in the Old City
Tension prevailed in the Old City on Friday as violence erupted following prayers in the Mecca Masjid on November 16. Youth emerging from the mosque wanted to perform prayers near the Charminar and were prevented by the police. They began pelting stones and soon the situation turned violent as the rampaging crowd set fire to four vehicles and damaged some others. There was an ensuing lathicharge and firing of tear gas shells. The violence soon spread to the surrounding areas of the Charminar such as Rein Bazar, Moghulpura, Yakutpura. Speaking to Outlook, South Zone DCP Akun Sabharwal said there was heavy stone-pelting in Rein Bazar area as well but that curfew had not been imposed in any part of the Old City. Schoolchildren and some women who were caught in the violence were escorted to safety in police vehicles. The construction of a canopy and shed at the Bhagyalakshmi temple located close to the Charminar has led to escalating tensions in the Old City and, over the last month, there have been repeated incidents of violence. Following Friday's violence, home minister Sabitha Indra Reddy appealed to citizens to stay calm and not be carried away by rumour mongering or other inflammatory statements. She assured people that peace in Hyderabad would be protected at all costs. Some shops were also burnt and common people were attacked by the angry protestors. The huge crowd also attempted to attack an MMTS train as alarmed passengers looked on. MMTS services have been cancelled for today. At least one person was attacked and suffered knife wounds.

Hyderabadi Hardball
After the MIM declared its withdrawal of support to the Kiran Kumar Reddy government as well as the UPA, the State Congress seemed unsure as to how to react. It went into its usual huddle and looked askance at New Delhi for support. The famed trouble-shooters Digvijay Singh, Vayalar Ravi and Ghulam Nabi Azad have been roped in. Diggy Raja has twitter problems of his own after he drew a parallel between Arvind Kejriwal and Rakhi Sawant. Vayalar Ravi is regarded more of a troublemaker than a trouble-shooter after his tasteless remark, "Telangana? Where is it?" As for Azad, one must have lost count of how many trips he's had to make to Hyderabad to solve one crisis after the other ever since Y.S. Rajasekhara Reddy's death. But MIM chief Asaduddin Owaisi who has been on a massive media drive since his announcement is playing hardball. The Hyderabad MP is neither in the mood to take any calls nor listen to messengers bearing the olive branch.

Double Dhamaka
Amid all this hullabaloo, it is the YSR Congress leaders who are grinning from ear to ear because of the brownie points they are gathering from the MIM. In fact, some party persons admit that even Sharmila Reddy's padayatra has not generated as much publicity as Owaisi's criticism of Kiran Kumar Reddy has. By stating that Muslims who identified themselves with the late YSR now considered Kiran Kumar an ineffective ruler, Owaisi has delivered a double dhamaka. He has hinted that Jagan alone is a worthy successor to YSR's legacy and that Congress is not a secular party.

Telugu Desam president Chandrababu Naidu's son Lokesh tweeted his support to Owaisi's move saying, "Agree with Asad on one fact. Congress govt has failed Muslims. Could not ensure peace, YSR could not get reservation passed!"

A Life Steeped in Fear...
Chief Minister Kiran Kumar Reddy, who did not respond immediately to Owaisi's remarks, chose the platform of a Children's Day meeting at Ravindra Bharati to voice his feelings. In the garb of doling out advice to students, the CM said, "A life steeped in fear is not worth living at all," he said with unusual aggression. He told the children to work hard towards their goals instead of being discouraged by failure. Upon hearing this so-called reaction to Owaisi's charges, dissident Congress leaders are smirking. "He does not have the guts to show his courage to adults, so he does it front of children," they snigger.

The Telugu Desam on the other hand wants to know who it is that has instilled fear in Kiran Kumar Reddy. "What is this fear that you are talking about? Who is it that has scared you so much? Please enlighten us," said TD leader Muddu Krishnama Naidu. The Opposition leader derided Kiran Kumar's remarks saying they did not befit the post of a Chief Minister.

Tight Fisted
The Kakatiya festival has turned into another bone of contention between Telangana and Andhra leaders. Recently appointed union minister of tourism and culture K. Chiranjeevi announced funds of Rs 50 lakh for the festival which was supposed to start on November 26. The festival has been postponed owing to protests by some sections. TRS president K Chandrasekhar Rao termed this "a pittance" stating that while the government went out of its way to make cultural festivals in Andhra a success, it was tight-fisted when it came to Telangana. "Why is it that when it comes to Telangana culture and its festivals, the state government projects a step-motherly attitude," he asked. Chiranjeevi, meanwhile, claims that he granted the Rs 50 lakh out of his own interest in the festival and that he meant well.

Suu Kyi Visits
Myanmar Opposition leader and Nobel laureate Aung San Suu Kyi is visiting three villages in Madakasira assembly constituency in Anantapur district on November 17. Suu Kyi will be studying the impact of government-welfare programmes in the drought-affected district. Revenue minister N Raghuveera Reddy who represents the constituency will be playing host and brief her on the role of Self-Help Groups, rural job guarantee scheme and co-operative dairies in the development of socio-economic conditions of the rural poor. Raghuveera is said to be ecstatic about the visit because he is a great admirer of Suu Kyi's. Kiran Kumar Reddy will also be attending the programme.

Stars & Style
Badminton doubles player Jwala Gutta who livens up the P3 scene in Hyderabad quite often has been telling anyone who’s willing to lend her an ear that she is open to film offers. She says reality TV is not her thing because her fans would not like her in a Big Boss-like scenario. Unfortunately, so far Telugu film producers have not paid heed to her not-so subtle signals. Maybe, somebody in Bollywood is listening?

Speaking of the city’s glam scene, Farhan Akhtar’s wife Adhuna has set up her hair styling salon in the city. And as they always do when a new place opens up, Hyderabadis are swarming the swank salon. Actor Nagarjuna was the chief guest at the opening. Nag might be 53 years old but he can still give actors half his age a run for their money. The secret behind his youthfulness, says the star, is quite ordinary. Take life as it comes, exercise and make sure that you get enough sleep.