A row over the long-pending matter to install the statue of the late N. T. Rama Rao in Parliament has seen a war of words break out in the TDP founder's family. Recently, NTR's daughter and union minister Daggubati Purandeswari wrote an open letter blaming Chandrababu Naidu for delaying the installation of the statue. Naidu in turn replied saying that he had led the campaign to install the statue and had made several efforts for the same. Purandeswari's husband Daggubati Venkateswara Rao, a Congress MLA also joined issue and blasted Naidu for being a hypocrite. "Naidu who was CM for nine years did not do anything. Using a Telugu saying, he asked "Naidu guddi gurram pallu tomuthunaara appudu (Was he brushing the teeth of a blind horse for nine years?)" In other words, the Daggubatis accused Naidu of sitting over the issue when he was CM. The term brushing a horse’s or donkey’s teeth is used in colloquial Telugu to insult someone who is perceived to be wasting time.

Not to be cowed down, Naidu got Purandeswari's brother, actor Balakrishna, who will contest the next polls on a TDP ticket to heap his own set of insults. Balakrishna in an open letter to his sister accused her of creating the whole mess. "Ever since the Congress government came to power in 2004, YS Rajasekhar Reddy refused to clear permission for providing the statue. Appudu nuvvu ae gaadida pallu tomuthunaavu (Which donkey's teeth were you cleaning at that time?)," asked a furious Balakrishna.

The actor even alleged that Purandeswari had delayed signing a letter on the matter which all other family members had signed on. "When Naidu sent me to get your signature, you kept me waiting and refused to meet me. You delayed the signature so that the permission given by the Lok Sabha Secretariat would lapse. This whole controversy is of your making alone," Balakrishna said lashing out at his elder sister.

Meanwhile, NTR's wife Lakshmi Parvathi, who probably was feeling left out joined the issue attacking both Purandeswari and Naidu. "Since I am the late NTR's wife, it is me who should sign on the letter. I will not allow these people to derive political mileage out of the row. I too will write a letter seeking permission to install the statue of my late husband," she says. Lakshmi Parvathi has also accused Naidu of scuttling the chances of N. T. Rama Rao being honoured with a Bharat Ratna posthumously. 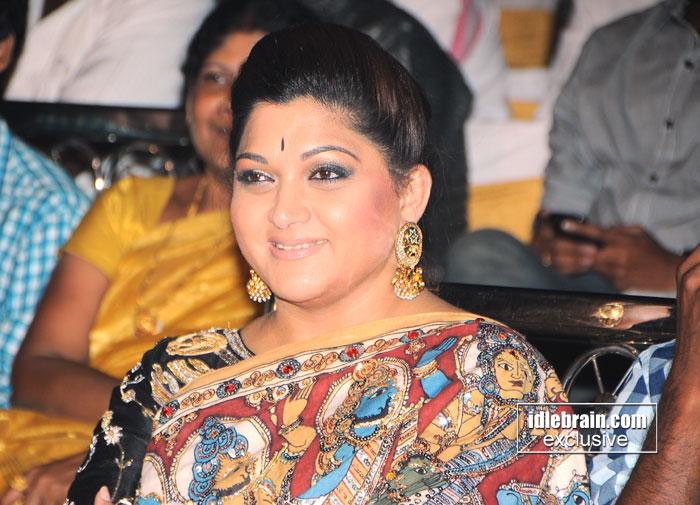 She is Not Sari

Khushboo is another lady who courts controversy all the time. The actress who was in Hyderabad recently to attend a film function wore a sari bearing the images of Lord Rama, Krishna, Hanuman and Narasimha Swamy. This triggered angst in some quarters. The Hindu Makkal Katchi demanded that the actress apologise immediately for hurting Hindu sentiments. Khushboo, who once had a temple constructed in her name in Tamil Nadu, faced several years of court cases for her remarks on pre-marital sex. Her support for pre-marital sex had invited the wrath of the Pattal Makkal Katchi the last time round. If it's not what she's saying, then it's what she's wearing. But Khushboo is always in the eye of a storm. Some Hindu religious heads say that having a temple in her name has "given Khushboo illusions that she's a Goddess herself. This is why she's dressing up in this fashion without the slightest respect for religious sentiments."

And speaking of controversies, there's another gentlemen who loves stirring them up. Vishwa Hindu Parishad international working president Praveen Togadia has joined the Bhagyalakshmi temple-Charminar issue. He has warned of an Ayodhya-like situation if anyone dares to lay a hand on the temple. "Do Hindus need permission to offer prayers at the Bhagyalakshmi temple? How can police prevent Hindus from going to the temple?" he questioned at a press meet in Hyderabad. He said that if there were any efforts to relocate the temple, lakhs of people from across the country would come to the city. The entire country will be united," he said. This is no longer an issue concerning just Hyderabad but one that is related to the entire nation," says Togadia.

The VHP leader also lambasted FDI in retail saying while it would bring short-term benefits, in the long run it would reduce farmers to manual labourers alone. "There are short-term gains but it will harm the country and the farmers by creating a state of monopoly," he says.

Togadia has also asked people to refrain from watching movies which portray Hindu Gods in poor light and termed it as a "film jihad".

Reacting to Togadia’s statement on the Bhagyalakshmi temple, MIM chief Asaduddin Owaisi told Outlook that “though Togadia is an oncologist by profession, he is a form of communal cancer. The people of Hyderabad will not fall prey to the vicious communal designs of the Sangh Parivar. This is an issue of protecting a heritage monument, the Charminar. The Sangh Parivar is communalising it,” Owaisi told this correspondent.

Dabangg 2 is all set to be released. There have been rumours that some of the scenes in Dabangg 2 have been copied from Gabbar Singh which in itself was a remake of Dabangg. Telugu audiences loved Gabbar Singh which starred Pawan Kalyan and Shruti Haasan and had no qualms in watching a quirky remake of the original Dabangg. But Gabbar Singh's makers are apparently angry now because Salman Khan and co. did not bother to seek permission to lift a couple of scenes for the sequel.

Tennis star Sania Mirza is all set to open a coffee lounge in the hi-profile Jubilee Hills area of Hyderabad. The resto-lounge will be called Ristretto and spread over 10,000 sq feet. Sania says it was little sister Anam’s dream to have one. Coffee lounges and hookah bars are extremely popular in Hyderabad and youngsters shell out big bucks just to have a puff of strawberry-flavoured hookah or a shot of espresso. Sania’s coffee lounge would also have space for pool tables and barbeque. Hyderabadis can’t wait to sample the menu at this place and hope to do indulge in star-spotting as well