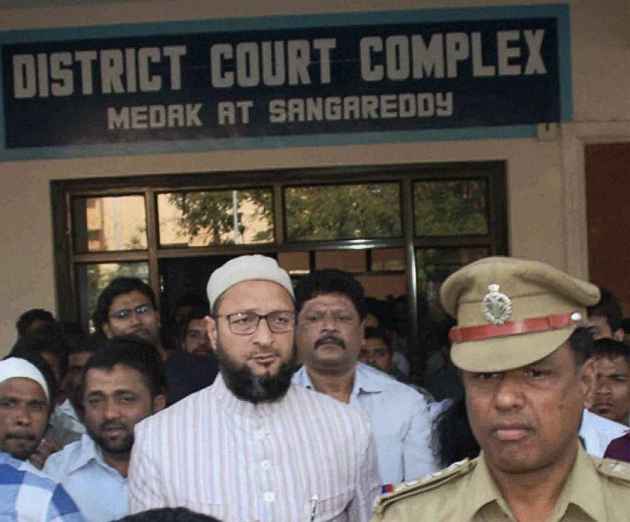 MIM MP Asaduddin Owaisi has followed his brother Akbaruddin to jail in connection with a 2005 assault case on the collector of Medak district. Police had filed a case against both Asaduddin and Akbaruddin for obstructing authorities when they were demolishing a place of worship. There were incidents of stoning in Hyderabad and tension reigned in the Old City as Asaduddin was remanded to 14 days' judicial custody. Six RTC buses were targeted and shops downed shutters in the Old City. Asaduddin, who surrendered in the Sangareddy court, was immediately sent to jail. While Akbar's arrest was triggered by inflammatory speeches in Nizamabad and Adilabad, political observers say the action against Asad boils down to vendetta politics. A case which is well over seven years old has been dug up to put the senior Owaisi behind bars. MIM supporters are seething with rage and say that this will distance the Congress even further from Muslim minorities.

The official word emanating from CM Kiran Kumar's camp is that "the law has taken its own course". But whispers in the Gandhi Bhavan say that Kiran Kumar did not take too kindly to being labelled a Sangh Parivar man by Asaduddin Owaisi. However, many worry that the twin arrests will backfire on the Kiran Kumar government. Police presence in the Old City has been increased and so far there has been no large-scale violence.

Another MIM MLA representing Charminar, Ahmed Pasha Quadri, who made objectionable remarks about Mahatma Gandhi's statue presence in the state assembly, appears to be next in line. Addressing a gathering in Karimnagar on January 17, Ahmed Pasha had said that though the Nizams had constructed the Assembly building, Gandhi's statue was installed there. "Kiske baap ka building aur kisko laake bithaya," the MLA asked of the gathering.  Police have already registered complaints against him and it appears that action is due anytime soon.

MIM leaders question why Congress Ministers Mukesh Goud and Danam Nagender who have several cases registered against them for roughing up people and officials alike have faced no arrest so far.

Telangana is coming; Statehood soon; T garam garam; Referendum in Hyderabad: These were the headlines floating around in the media over the last few days. Congress leaders and union cabinet colleagues Vayalar Ravi and Ghulam Nabi Azad were the ones who set the cat among the pigeons again during a meeting with Seemandhra leaders. Vayalar Ravi reportedly told the anti-statehood petitioners that Telangana statehood was a given and that they'd have to take it or leave it. Soon enough, TV channels began buzzing with T in a day or two kind of stories while Vayalar Ravi, as is his nature, issued another statement denying it all. Surprisingly, through all the drama, it was the Telangana leaders who chose to wait and watch instead of early celebrations. God knows they've been down the road of false starts before and the response was understandably muted. TRS leader K Chandrasekhara Rao who has retreated to his farmhouse in Medak yet again is probably waiting for union home minister Sushil Kumar Shinde's January 28 deadline. Shinde had said that a decision would be taken by January 28, 2013.

In the meantime, the usual concern over the status of Hyderabad continues. Will it be a part of Telangana, a joint capital or a Union Territory in case the UPA government actually decides to concede statehood? Leaders of various parties from Telangana have been maintaining a studied silence. The ball's in Shinde's court now.

Speaking of courts, the Nampally Special Court has given the nod for CBI to prosecute Mopidevi Venkata Ramana and Dharamana Prasada Rao in the VANPIC (Vadarevu and Nizampattanam Port and Industrial Corridor) land allotment case. While Mopidevi is already in jail in connection with the Jagan illegal assets case, Dharmana still holds the portfolio of Roads and Buildings. The Kiran cabinet which had denied permission to the CBI to prosecute Dharmana will have no option but to accept the minister's resignation now. Chief Minister Kiran Kumar Reddy who was seen as shielding Dharmana has lost this round to the courts.

Ram Charan Tej's latest release Nayak falls into the customised fan formula bracket. Masala, gravity defying dances, fights, comedy and the mandatory romantic song-in-snow. The song Subhalekha raaskunna is a reprise of an old Chiranjeevi song. Ram Charan and Amala Paul sizzle in the number which was shot in Iceland. So it's bye bye, Switzerland . All credit goes to Amala Paul who in her chiffon manages to look as if she's dancing next to a radiator, her sultry pout fuller than ever. Must say that Ram Charan sounds more and more like his dad Chiranjeevi these days. Especially, when he says "Mana (Hindi equivalent of the royal hum) fans happy ga unnaru." In other words, Hamare fans khush hue. Or check out his remarks about Amala Paul. Aa ammayi baaga dance chesindi. "That girl danced well. She pleasantly surprised me." In other words, it is a given for fans that 'mana' Ram Charan will obviously dance well. It is the poor leading ladies who have to live up the litmus fan test. Ram Charan also had a word of advice for youngsters. "You have to be aware of politics, your MLA, of the government's functioning." Chiranjeevi sure seems to be coaching his darling lad well. And if in any doubt, please do refer to the name of the film.