Hospitals report an Angelina Jolie effect, as panic calls pour in from women wanting to know if they too need to follow the Hollywood star to ward off breast-cancer

In the past few days, cancer specialists in Hyderabad's corporate hospitals have been receiving several panic calls, mostly from women. They all want to know one thing. If Hollywood actress Angelina Jolie underwent double mastectomy to beat her odds of getting breast cancer by 90%, should they do the same? So far corporate hospitals like Apollo, Kamineni and Krishna Institute of Medical Sciences (KIMS) among many others have been flooded with queries. This has bewildered doctors and hospital staffers alike, some of whom haven't even heard of Angelina Jolie. What is astonishing is that many of these women are only in their 20s and 30s.

Dr P Raghu Ram, Oncoplastic breast surgeon at KIMS says that over the last 15 days, he has received at least 40 calls from friends and patients asking if they should get a genetic test done. "There is very little awareness about genetic testing for breast cancer in India. The test should be done only if there is a significant family history of breast cancer."

These are the factors he cites which makes for high risk groups:

Stating that the genetic test costs Rs 50,000, Dr Raghuram says that such a test should be opted for only after detailed genetic counselling. "Angelia Jolie's mother, aunt, grandmother, great grandmother all had forms of breast and ovarian cancer. So she certainly made the right decision. But it is a fact that a vast majority don't need the test," says the doctor. Besides, there are options other than mastectomy such as close surveillance, the drug tamoxifen which is used for risk reduction, he states.

The Angelina effect, as Dr Raghu Ram terms it, is good in terms of raising awareness. "But we have to remember not to panic simply because a celebrity has undergone a procedure," he advises.

The State of the T-Statehood

TRS supremo K Chandrasekhar Rao's public meeting in the Nizam College grounds of Hyderabad to welcome Congressmen G. Vivek, K Keshava Rao and Manda Jagannadham into the TRS fold went on expected lines. KCR, as usual, lambasted the Congress for failing to meet T-Statehood demands. He scoffed at AICC general secretary Ghulam Nabi Azad's announcement that a decision on Telangana would be taken by the month-end. KCR asked Azad to clarify whether the end of June meant 2013 or the end of June in 2014 or the year after. When union home minister Sushil Kumar Shinde had said in the past that the Telangana issue would be settled in a month, Azad had remarked that one month does not literally mean 30 days just as one week does not always mean seven days. Referring to this, KCR remarked that Azad was a leader one certainly could not trust.

Opining that people were fed up with Congress' promises on statehood, KCR said the ruling party would be taught a lesson in the forthcoming polls. The TRS president once again reiterated his promise that if the TRS wins, it would make a Dalit the Chief Minister.

Hitting out at MPs deserting the party, Congress spokesperson T Jagga Reddy has said: "On the first day of their arrival in the TRS, KCR will keep them in the luxury of the bedroom. After that, these MPs will be left in the lurch in the front yard."

Jagga Reddy also wondered how the TRS was in a position to grant statehood or obtain it. Another Congress leader P Sudhakar Reddy remarked that though KCR kept talking about a Dalit CM, he had insulted the two Dalit MPs Vivek and Jagannadham by not giving them a chance to speak during the Nizam Grounds rally.

Incidentally, the TRS which already has a newspaper— Namaste Telangana— and a Telugu channel— T News— will soon be launching an English newspaper, Metro India.

Chief Minister Kiran Kumar Reddy has sacked health minister D L Ravindra Reddy who has been a bitter critic of the CM and his schemes. Known for shooting his mouth off at every given opportunity to criticise Kiran Kumar, Ravindra Reddy got the boot when he was holidaying in London. Ravindra Reddy was rewarded with a ministerial post for being the sacrificial lamb in the Kadapa Lok Sabha byelections. He contested on behalf of the Congress against Jaganmohan Reddy and lost by a margin of about 5 lakh votes. In recent times, Ravindra Reddy has been extremely critical of the Bangaru Thalli scheme (girl child insurance). He had announced that the scheme would fail and Congress workers would be beaten up in villages. It appears that the Congress high command has given Kiran Kumar the green signal to act against his detractors. But Ravindra Reddy's unceremonious exit has left some Congress seniors shaken. Panchayat Raj Minister K Jana Reddy and Deputy CM D Raja Narasimha held a meeting recently to discuss the developments. Jana Reddy said he was pained by Ravindra Reddy's ouster and requested the Congress high command to strive for unity among warring leaders.  Meanwhile, it is being speculated that Ravindra Reddy might join the Telugu Desam. Most of his critical remarks have always been against Jaganmohan Reddy and Kiran Kumar. He seldom hits out at TD chief Chandrababu Naidu. Hence the yellow party might prove a good nesting place for him till the next General elections.

Now for some political trivia. The Telugu Desam has released a list of 125 political leaders who visited YSR Congress chief Jaganmohan Reddy in jail over the last year. The opposition party has sent the list to Director General of Prisons T Krishna Raju asking him to clarify why political activity was being allowed inside the Chanchalguda prison. TD MLA M Venkateswara Rao told the media recently that politicians who were meeting Jagan spoke about getting their problems solved by the MP. 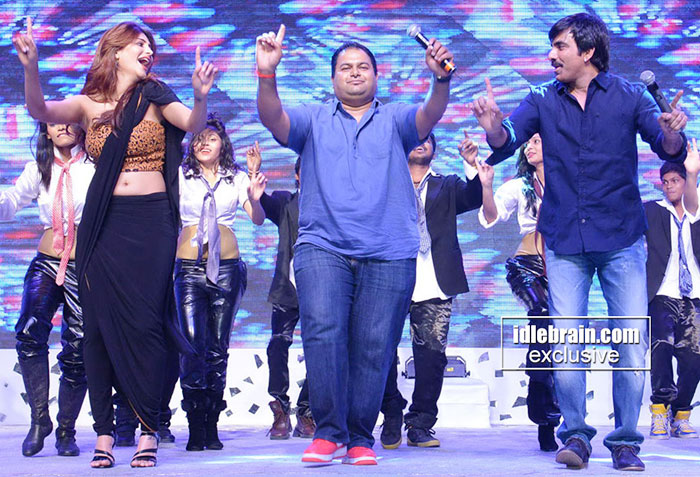 Kamal Haasan's actress daughter Shruti Haasan seems to be getting really desperate. Why on earth otherwise would she sign a Telugu film Balupu opposite Ravi Teja who's not exactly in the top league? The 27-year-old is not making waves in Bollywood but why is she grabbing such films where she has nothing to do? At the recent music release function of Balupu, Shruti got onto the stage to shake a leg with music director Thammam and co-star Ravi Teja. But her bizarre costume got in the way. As her tank top kept slipping, a wardrobe malfunction almost happened. She needs a new fashion designer pronto and some career advice for sure.