In the first round of the panchayat polls held in 5,790 village panchayats, the Telugu Desam has done quite well, even if the pollsters are putting it at #3 in the 2014 General Elections

In the first round of the panchayat polls held in 5,790 village panchayats, the Telugu Desam has done quite well. It has stayed ahead of both the YSR Congress and Congress. Though the panchayat polls are not held on a party basis, they indicate which way the wind is blowing since parties back certain candidates. The TDP was ahead in 1,700 panchayats while the Congress led in 1,524 seats. The YSR Congress has a tally of 1,140 seats. The TRS has put up a miserable performance with 421 seats. The Congress lost in Chief Minister Kiran Kumar Reddy's constituency where it secured just 57 panchayats as against the TDP which shored up 137 panchayats. Chittoor happens to be the home district of Chandrababu Naidu as well. The Congress has performed well in Telangana which political experts attribute to its recent manoeuvres on granting Statehood. In TRS supremo K Chandrasekhar Rao's home turf, the party fared miserably and won only 12 seats. The Congress won 168, the TD 138 and the YSR Congress 99. While Naidu boasted that the results were a reflection of people's disenchantment with the Congress, PCC chief Botsa Satyanarayana said it was too early to pass such judgements and one should wait for the other two phases of polling.

Incidentally, the recent predictions by The Hindu-CNN-IBN Election Tracker Survey conducted by Lokniti-Centre for the Study of Developing Societies (CSDS) show the Congress still ahead, and leaves the TDP trailing behind both Congress and YSR Congress: 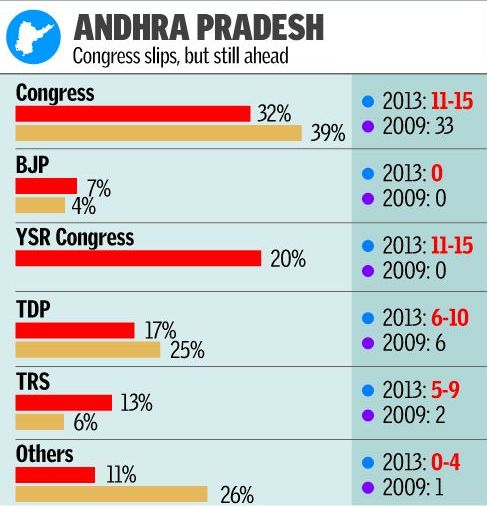 So the Indian Badminton League has taken birth. Hyderabad players form the cream of the league. World No 3 and Olympic medallist Saina Nehwal bagged an auction price of $120,000 (Hyderabad Hotshots) while Parupalli Kashyap was snapped up by Banga Beats for $75,000. P V Sindhu went to the Lucknow Warriors for $80,000. Amid all this hoopla, doubles players Jwala Gutta and Ashwini Ponappa have lashed out at the ill-treatment meted out to them. While Jwala went to the Delhi Smashers for $31,000 calls it "cheating", the argument doled out was that since she is a doubles player, her base price was cut from $50,000 to $25,000. Same was the case with Ashwini Ponappa who went to the Pune Pistons for $25,000 only. Jwala argues that both Ashwini and she are bronze medallists in the World Championship and should have been treated with more respect. Ashwini on the other hand wonders why other doubles players got way more than her. She says she is deeply hurt and says she got to know about her price only after the auction was over. In other news, Jwala Gutta is making several public appearances with actor Harshvardhan Rane. From the launch of a beauty salon to the latest film awards ceremony, the couple is seen posing for shutterbugs in cozy fashion. Jwala is one gal who likes to be open about her emotions, be it love or outrage at the 'insults' at the IBL auction.

The pathetic condition of the roads in Hyderabad and Secunderabad is leading to traffic nightmares in this rainy weather. The shocking death of 17-year-old student Riya Gudial is a case in point. Riya was riding pillion on a bike which skidded off the road near Anand theatre in Begumpet. She fell on the road and was crushed to death by an RTC bus which was coming from behind. Even after the accident, the negligence of officials was obvious when motorists kept skidding and getting injured. The Greater Municipal Hyderabad Corporation Commissioner M T Krishna Babu says no repairs on roads will be carried out unless the rains stop. So it is a lose lose situation for denizens so far.

The audio release of the Pawan Kalyan-starrer Attarintiki Daaredi (Show me the way to my mom-in-law's place) was meant to showcase the might of the 'Power Star' as the actor is called. Pawan Kalyan, who is Chiranjeevi's younger brother chose not to invite any of his family members and restricted the audio function to the film's unit members alone. The film is directed by Trivikram Srinivas of Jalsa fame and the music is by Tollywood's current flavour, Devi Sri Prasad. Aaru adugula bullet is already a hot number with Pawan Kalyan fans and the music promises to be of the typical masala variety. As is the norm in all Telugu film functions, everyone from the director to the heroine to the script writer to character artiste trooped in on the stage, to sing praises of the hero. The takeaway of the evening was how wonderful a human being Pawan Kalyan was and that he deserved success more than anybody else on the face of the earth. Trivikram recalled his association with the 'brave' Power Star. "When I visited him after the Praja Rajyam Party's defeat in the polls, I found Pawan Kalyan sitting with a calm expression on his face. He told me that fighting the battle was everyone's duty. But victory or defeat was not in one's hands."

As whistles resounded from the fans at the Shilpa Kala Vedika, the function's venue, Pawan Kalyan took the mike and delivered a dialogue from the film, "Nenu simham laanti vaadini. Adi gaddam geesko ledu, nenu geesko galanu. Migathadi antha same to same" (The only difference between me and a lion is that I can shave my beard and it can't. Everything else is: same to same).

That's the macho Telugu hero for you.

Actor Nandamuri Balakrishna's daughter Tejaswini is getting married to union textiles minister Kavuri Sambasiva Rao's grandson Sribharat. The engagement date is set for August 11, 2013. The date of marriage is yet to be announced. Sribharat has done his Industrial Engineering from the US and manages the Hyderabad branch of Gitam University. Balakrishna's older daughter Brahmani is married to Telugu Desam chief Chandrababu Naidu's son Lokesh.