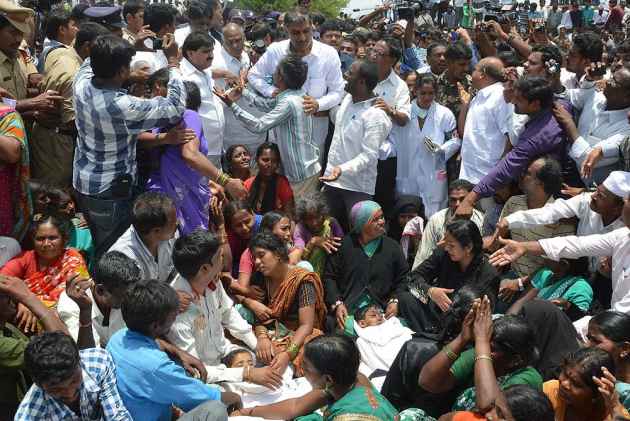 Even as more than 20 schoolchildren were killed in a horrific train-bus accident on an unmanned level crossing 70 km from Hyderabad, national media channels were busy analysing the latest Sania Mirza controversy. She has been appointed brand ambassador for Telangana and given a cheque of Rs 1 crore by Telangana Chief Minister K Chandrasekhar Rao.  BJP MLA K Laxman wondered why the Telangana government had handpicked Sania when she was married to Pakistani cricketer Shoaib Malik and was therefore a daughter-in-law of Pakistan. National TV channels spotted a masala story and went ballistic. They scrambled around for bytes from various party leaders on Sania's nationality issue and how India was proud of her. The BJP's right wing attitude was slammed and suddenly the quiet K. Laxman became the most sought after man for a few juicy quotes. Not one channel focused on the tragedy unfolding near the train tracks at Masaipet village where young children, all from nearby villages in Medak district, lay crushed to death in their school bus because the driver had ignored the danger of an incoming train. If this isn't journalism of hypocrisy, then I don't know what is. How is it that such a shocking accident involving innocent young children, most of them under 10 finds negligible coverage in national media? The answer, though unpalatable, is simple. They are all children from poor families. Most of the parents are small farmers or farm labourers who had saved through hard work to send their children to a private school, the Kakatiya Techno School in Toopran. Such was the anger over the accident that villagers began pelting stones at lawmakers who visited the spot one by one causing huge traffic jams. A lathicharge was natural to follow. Shocked and teary eyed parents waited anxiously outside the ICU unit hoping that their children would live.

The Telangana government announced a compensation of Rs 5 lakh for families of the dead while the central government announced Rs 2 lakh. But evidently, this is not news for English channels. Sania Mirza on the other hand is the glam girl who immediately boosts TRPs of channels. There have been murmurs in the Telangana cabinet that the payment of Rs 1 crore to Sania Mirza was taken a bit hastily. While Sania definitely has an international appeal, there are other more deserving sportspersons and cultural icons in Hyderabad who could have been picked," a government official says on condition of anonymity.

In a recent dinner organised for journalists, Telangana Chief Minister K. Chandrasekhar Rao arrived fashionably late. Liquor was not served because evidently KCR knows what a few quick pegs can unleash among my tribe. And this perception is no exaggeration. Almost every person who hears I am a journalist invariably has this to say: "You people drink a lot". So there was a lot of fruit punch, lime mojitos and fresh juice. Rajya Sabha member K Keshava Rao and irrigation minister T. Harish Rao arrived early in the manner of supporting stars. The invited journalists were told not to bring still or video cameras and told that this meeting was just an informal one. But as soon as KCR walked in, suddenly cameras and flashbulbs appeared and a near stampede-like situation ensued. The first Telangana CM is the most sought after man especially since he does not really entertain interviews and maintains an air of exclusivity. The CM blushed and nodded his head vigorously when some journalists praised his "bold step" to scrap the fee reimbursement scheme and in sticking to the loan waiver promise. Some senior members of the fraternity who hailed from Andhra sought to know where they stood in that grey area. KCR nonchalantly remarked, "Well you are not a citizen of Telangana but don't worry, your children are." Every joke cracked by KCR was lapped up and guests hung on to his every word. And as the crowd around him got a bit too much to bear, publicity cell officials diplomatically announced, "Honourable members of the media are now invited to participate in dinner". A blink and more flashbulbs and KCR disappeared, Batman style, into the night.

The Telangana government is all set to issue "citizen cards". These multi-purpose cards are meant to ensure that welfare schemes offered by the government reach the real beneficiaries. These cards would be issued after door-to-door verification on the lines of issuing passports, the CM stated. In a meeting with officials of the State Academy of Rural Development, KCR said that there were at least 22 lakh excess ration cards in the system which had to be weeded out. So for this too, a passport-type verification process would be undertaken soon. The Telangana government has decided to abolish ration cards issued under the united AP state and fresh cards with the TS (Telangana State) logo will be issued soon.

Meanwhile, the Andhra Pradesh government has an offer from management consulting firm McKinsey & Company for a six-week free consultation on building the new capital in AP. The company has already submitted a report to the AP government on world class capitals. Andhra Pradesh municipal administration minister and chairman of the capital committee P. Narayana stated at a press meet that the capital will indeed be located between Vijayawada and Guntur. McKinsey's six-week consultancy is a huge boost for the state government, he said.

But for those who did read Fifty Shades of Grey and promptly dumped it, there is a parody named Fifty Sheds of Grey which is superb. Of course, one must have read the original to enjoy the spoof. Here are a few sample sentences which I found to be rib-tickling:

"The bed shook, creaked and rattled as she gripped the headboard and screamed out my name. At this point, we were asked to leave Ikea."

'I am a bad girl,' she moaned as she leaned over my workbench, 'I deserve to be punished.' 'Very well,' I said and cancelled her credit card.

As soon as I closed the door, the sparks really began to fly. I guess she was right about not putting baked bean tins in the microwave.

I do not know about the readers but this is a book I am definitely going to pick up.