Chiranjeevi shed his politician tag and when he danced to some of his popular numbers such as Shankardada MBBS, it felt like the actor had never stepped away from the arclights. 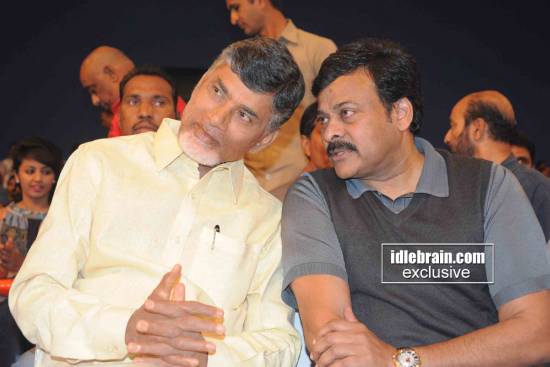 The Telugu film industry got together to organise a series of events, under the umbrella Memu Saitam, to raise funds to deal with the aftermath of the Hudhud cyclone in Visakhapatnam. Top Telugu stars sang, danced, played Cricket, kabbaddi and held a dinner to raise Rs 11.51 crore for the CM’s Relief Fund. Chiranjeevi, Balakrishna, Venkatesh, Nagarjuna, Jayaprada, Jayasudha, Anushka, Naga Chaitanya, Ram Charan Tej, Prabhas, Tamanna, NTR Jr, Kajal Agarwal, Vedaa, Lakshmi Manchu, Rakul Preet, Akhil Akkineni, Baba Sehgal, Mohan Babu, Ravi Teja, K Raghavendra Rao among many others participated with zest to raise funds. Chiranjeevi shed his politician tag and went back to the good old days of being a Megastar. When he danced to some of his popular numbers such as Shankardada MBBS, it felt like the actor had never stepped away from the arclights. Check out the youtube link of his dance with music director Devi Sri Prasad. The one top star who was conspicuous by his absence was Pawan Kalyan. Some said the actor was unwell, others said he wasn't in the city. But the fact that he gave such a major event a miss led to many wagging tongues. Many felt that Pawan Kalyan deliberately skipped the event to avoid meeting his elder brother Chiranjeevi with whom he has been sharing cold vibes ever since he launched the Jana Sena Party. Strangely, even the Jana Sena Party is in limbo after all the hectic electioneering.

Telangana Deputy Chief Minister Dr T Rajaiah recently spent a night at the Osmania General Hospital (OGH) to interact with patients, doctors and paramedical staff. He slept in the superintendent's chamber where arrangements were duly made. Of course, as is the norm before any VIP visit, hospital authorities got into some frenzied sprucing-up of the premises. The corridors were thoroughly cleaned, all heads of department were present and the deputy CM himself went about examining some patients with a stethoscope around his neck. BPL patients who generally camp in the portico area or near the nurses' hostel were packed off to an NGO nearby. Garbage was put in black bags and kept outside the hospital. For a change, OGH looked almost clean. Dr Rajaiah, who is himself a diabetic, underwent some tests at the diagnostic centre to instil confidence among patients. This is the first of many visits of the Deputy CM to government hospitals to inspect and sort out problems.

Cyberabad Police busted a mass copying racket during the Railway Recruitment Cell entrance exam and arrested 30 persons including 10 candidates who had shelled out Rs 5 lakh each for answers to the test. The candidates sitting for the exams used small cellphones which looked like a taawiz (pendant) and micro bluetooth devices fitted in their ears. The main accused in the racket managed to get copies of the question paper, clicked photographs and transferred them on WhatsApp to an associate. A team of experts sitting with the gang members supplied the answers which were relayed by relatives of the candidates on the micro devices. Special teams raided the exam centres at Dilsukhnagar Public School, Sri Chaitanya Junior Kalasala, Chaitanyapuri and Gowtham Model School, Trimulgherry and caught the candidates red-handed. The main accused Machender, is said to be a railway employee, who apart from collecting cash also provided the candidates with sophisticated electronic devices.

Realignment of the Metro line in the Old City will extend the rail line by 3.2 km, says Hyderabad Metro Rail MD, NVS Reddy. The realignment has primarily been proposed by the MIM. The present route from Jubilee Bus Station in Secunderabad to Falaknuma in the Old City will affect seven temples, 28 mosques and about 1,000 shops and houses. The Metro will pass through areas such as Mir Alam Mandi, Dar-ul-Shifa, Etebar Chowk, Charminar, Shalibanda, Shamsheerganj, Moghalpura, Jangamet and other areas in the Old City. The MIM has suggested that the Metro pass along the banks of the Musi instead via the Dar-ul-Shifa-Mir Alam Mandi road. It is unofficially estimated that this change in route alignment will cost at least Rs 800 crore extra. Near the Assembly, there will be no change in length, except that the track will pass behind the Assembly building over the police headquarters in Lakdi-ka-Pul. At the Badi Chowdi-Sultan Bazar area, the Metro will go behind the Koti Women's College to protect the historic Sultan Bazar market and traders.

The Hyderabad 10K Run had the legendary runner, 86-year-old Milkha Singh, as its chief guest. Several fans queued up for autographs from the Olympian athlete. Milkha Singh said that the women in the movie Bhaag Milkha Bhaag were indeed real and he had experienced such romances. Milkha named the Australian love interest and said she was sprinter Betty Cuthbert who won three gold medals for her country. Milkha reportedly met her at a press meet when she asked him what the turban he was wearing was. Milkha gifted the lady her turban and the rest as they say was history. At the 10K run, Milkha said he hoped to see another version of himself emerge in Hyderabad soon.

Christopher Nolan's Hollywood magnum opus Interstellar has excited audiences across India. The manner in which human emotions have been intertwined with a five-dimensional world in the movie has left Hyderabadis dazed. The concept of wormholes, black holes, how gravity is connected to love and logic has had everyone furiously googling quantum physics lessons or else dusting the good old textbooks. Schools in Hyderabad have been arranging for trips to the cinema so that their students can lap up this sci-fi spectacle. Students who watch it in IMAX format say that they feel like they were transported into another world altogether by Interstellar. Others say they now want to study astrophysics. Mathew McCouaughey is the current "crush factor" among most schoolgirls. All right, all right all right! Get them Interstellar tickets already. 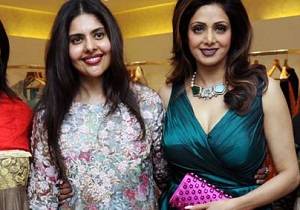 Actress Sridevi made her starry presence felt in the city recently as she lent support to cousin Maheshwari who launched her designer label Mahe Ayyappan. Maheshwari, who is best known for her role in hit Telugu film Gulabi, faded out quite soon after delivering a few hits. Sridevi arrived two hours late for the event and said she had been wearing her cousin's pieces since long. Maheshwari's clothes are in the "evening wear" section and are priced between Rs 7,000 and Rs 40,000. Maheshwari who had some other hits such as Nee Kosam, Ullasam, Pelli is rumoured to have undergone cosmetic surgery at the peak of her career which went horribly wrong. Her enhanced cheek bones and wide jawline put producers off and the once-in-demand actress stopped getting roles. Hope she has better luck in the designing department.