KTR's tireless campaign in the municipal polls paid off and both the TD as well as Congress have been left red-faced. 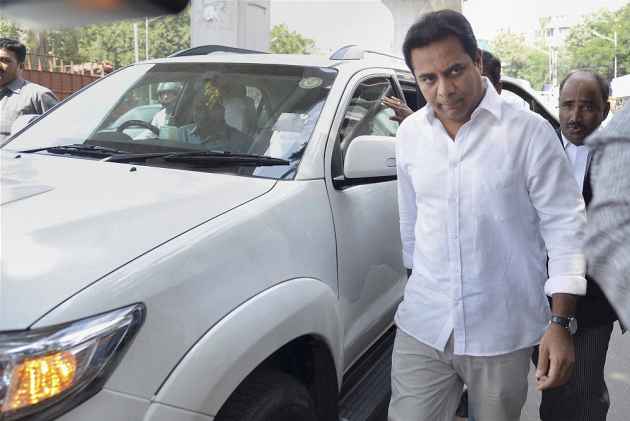 Telangana IT Minister K T Rama Rao, who led the TRS to a major victory in the GHMC polls with 99 seats, has now also been made Municipal Administration Minister. Telangana CM K Chandrasekhar Rao had hinted that his son would be given the additional portfolio in a press conference before the polls where he exuded confidence about the results.

For the TRS, a win in the Greater Hyderabad Municipal Corporation polls, is a clear mandate for the fact that Hyderabad is no longer the exclusive domain of the TD or Congress. The TRS did not perform too well in the Assembly elections in Hyderabad and the TD had stated that this was because of KCR's "Andhra settlers" attitude. However, it is evident now that voters in Hyderabad have not only felt it is better to vote for the ruling party but also that they feel TRS will indeed protect their interests.

KTR's tireless campaign in the municipal polls paid off and both the TD as well as Congress have been left red-faced. The TRS with 99 seats and friendly MIM with 44 seats have been left with virtually no opposition in the Municipal Council. As Municipal Administration Minister, KTR will now also supervise the flagship scheme of two-bedroom houses for the poor in the Hyderabad area. While politicians tend to develop amnesia about voters once the results are declared, KTR turned the ball around by paying a visit to Padmaraonagar the day after the TRS victory. His cheery photo op with an elderly woman in Hamali Basti, Padmaraonagar made headlines taking the image forward that the TRS would remain focussed on its initiatives for the poor.

In the meantime, posters stating Nannaku Prematho (title of the latest NTR Jr starrer) showing the GHMC victory as KTR's gift to his father, are being circulated on social media. KTR has also paid a visit to Mukesh Ambani and Cyrus Mistry seeking investments in Telangana.

Dealing with the Kapus

Andhra Pradesh Chief Minister Chandrababu Naidu might have faced a miserable defeat in the GHMC polls but his handling of the Kapu reservation issue lends credence to his political wisdom. Even as the International Fleet Review was on in Visakhapatnam, Naidu dealt with Kapu leader Mudragada Padmanabham's fast in deft fashion. TD legislators B Bhaskara Rama Rao and Thota Trimurthulu held talks with Mudragada and convinced him that the TD government was serious about the issue.

Directions to the K L Manjunath Commission to complete its study on the soci-economic condition of the Kapus within the stipulated time, allotment of Rs 500 crore to the AP State Kapu Welfare and Development Corporation to help unemployed youth, nomination of Mudragada to the board of the Corporation were among the assurances given to the Kapu leader. Naidu ensured that Kapu leaders from the Congress and YSR Congress were prevented from meeting Mudragada during these developments. Hence, Botsa Satyanarayana, Umareddy Venkateswarlu (YSRC), and Chiranjeevi, M M Pallam Raju, Dasari Narayana Rao (Congress) were not allowed to visit Kirlampudi where Mudragada was fasting.

As soon as Mudragada mellowed, AP TDP president K Kala Venkata Rao and Minister K Atcham Naidu trooped in with some lemon juice into Mudragada's residence. Soon afterwards, Mudragada was drinking the juice and thereby called off his fast. "I am ready to wash Naidu's feet if he keeps his promises made to the Kapus," said Mudragada. So, as of now, a potentially disastrous situation has been averted by the ruling Telugu Desam.

Guess who was in town?

There was a flutter in the Hyderabad High Court recently when former Union Minister P Chidambaram appeared in the Jaganmohan Reddy assets case, to defend client Punith Dalmia. Chidambaram came to the court at 3 pm and told the Court that the Enforcement Directorate had been summoning his client even after the chargesheet was filed in the case. He argued that the ED can summon the accused only during investigation after which the trial court would be seized of the matter. "But in Punith's case, the ED authorities are summoning him even at this stage which is unlawful," Chidambaram argued. The case has been posted for February 16 for ED authorities to respond.

The Telangana government will establish three more government hospitals in Hyderabad in addition to Osmania, Gandhi and King Koti hospitals. Chief Minister K Chandrasekhar Rao has hinted that funds for the three new hospitals will be provided in the 2016-2017 Budget. The T government has also announced a special allowance of 25% to police personnel working in the Intelligence, security and CID wings. With this allowance, the salaries of 464 personnel in Intelligence, 646 in CID and 893 in the security departments will increase. The police personnel in these departments are happy campers and Intelligence chief B Shivadhar Reddy called on KCR to convey his gratitude for the measure.

A second go at marriage

Chiranjeevi's second daughter Srija, who had eloped and married Sirish Bharadwaj in 2007, is all set to marry again after her divorce. At the time of marriage, Srija and Sirish had alleged that they faced a threat from Chiranjeevi's family, specifically Pawan Kalyan. The couple had a baby girl in 2009. Subsequently though, the marriage faced rocky terrain when Srija filed a dowry harassment case against her in-laws in 2011 and walked out on Sirish. Sirish had said he was being framed by Chiranjeevi's family but Srija refused to go back to him. It appears now that the dramatic story has come to an end with the divorce. Srija had even gone abroad for some time to pursue higher studies after the marriage and giving birth to their daughter. Srija's second marriage is likely to remain low-key under the circumstances and Pawan Kalyan has already visited Chiranjeevi a few times to discuss the same, say sources.