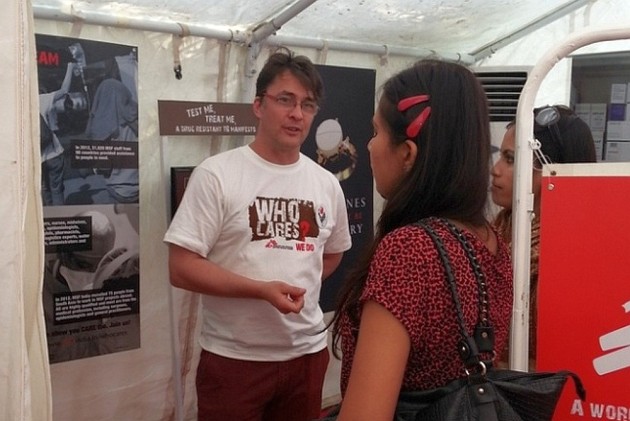 There's a growing buzz about a board meeting of the troubled media giant Deccan Chronicle Holdings Ltd on March 19. Will there be a takeover, as is whispered? Srei Infrastructure Finance Ltd which holds 24% stake in DCHL – which has an equity base of 27.5 crore shares – was named by market watchers as the frontrunner. According to reports, Srei Infrastructure is said to have identified Manoj Mohanka as a potential investor to invest Rs 30 crore capital as equity and unsecured loan in the company.

But speaking to Outlook, Hemant Kanoria, chairman and MD of Srei Infrastructure, said that the company had no plans for a takeover. "We have simply converted the debts into equity in DCHL. We have moved the Hyderabad High Court as well as the DRT for recovery of our loans," Kanoria said. DCHL Chairman T Venkatrram Reddy is currently out on bail.

In January 2014, Srei Infrastructure had sought a conversion of some part of its loans to DCHL into equity. About a year later, DCHL had issued 6.6 crore fresh shares to Srei Infrastructure. There has been talk of a "compromise" whereby 75% of the debts of DCHL would be waived and bankers would take a major haircut. This would in turn pave way for some other firm taking over the management of DCHL. But some creditors, who are unhappy with this compromise scheme, which would make way for rehabilitation of the DCHL, have moved the High Court. Among them are said to be Indiabulls, Tata Capital and Adoniss Ltd. The Hong Kong-based Adoniss Ltd is a newsprint supplier which had supplied newsprint worth Rs 125 crore on credit to the DCHL.

As of September 30, 2012, DCHL had an aggregate principal amount of secured and unsecured loans amounting to Rs 3,987.5 crore. Apart from this, the accumulated losses of the company amounted to Rs 513 crore. Let's see if thtere will be a peaceful takeover of DCHL.

Martin Sloot, India's General Director of Medecins Sans Frontieres, was in Hyderabad recently and participated in a talk organised by debate group HYD Park and Rotary Club to talk about the MSF's work in conflict and disaster zones where people find it difficult to access basic medical aid. Sloot answered several questions about the impartial outlook of the MSF when offering help and its strict non-political stand. However, Sloot, who hails from Holland, seemed taken aback when a lady in the audience took the mike and announced, "Martin, can I call you Martin? I feel a connect with you and really admire you." Her gushing words led Sloot to blush furiously as he fumbled and wondered how to respond.

But overall Sloot presented the audience with an in-depth understanding of what it is like to be a volunteer in the MSF where there are "no guarantees that a rocket won't land on the place where MSF workers are put up". When some of the youngsters in the audience wanted to know how to join the MSF, Sloot said, "It's quite a strict selection process and those who are through have to undergo a two-week course in multi-cultural policies and security. While we do not believe in arming ourselves or living behind high walls, our volunteers are taught mitigation strategies."

Sloot explained that 90% of the MSF's funds came from private partners though they did not accept funding from pharma, mining, tobacco and arms manufacturers. The MSF is present in Bhadrachalam and some parts of Chhattisgarh. Sloot said that in India, as in many other countries, there are gaps in medical care. "Women sometimes need to travel six hours for a C-section. MSF goes to forgotten people who live in areas of forgotten conflicts across 65 countries and our teams provide medical assistance irrespective of nationality, race and religion." Recollecting how he worked in Burundi alongside a 74-year-old woman volunteer, Sloot said there is no age limit to joining the MSF "as long as you are physically healthy because you will be working in difficult conditions".

Speaking in the Assembly recently, Telangana Chief Minister K Chandrasekhar Rao spoke about the issue of Rohith Vemula's and said such incidents were indeed unfortunate. He said he felt saddened by students falling prey in such a manner to extreme steps. "I did not want to make narrow political gains by commenting at the time on the issue or interfering in the process of law," he said. He condemned incidents of anarchy in universities and said that these ought to be places of learning and excellence. KCR said he was shocked to know of the "Kiss festival" which was held in the University of Hyderabad. "Is this correct? Will anyone in our country accept such festivals," asked the CM. KCR said the search was on to fill posts in universities. "We have changed the Universities Act, according power to the State government to appoint chancellors and vice-chancellors. We took permission from the Governor who used to be the chancellor of all universities for changing the Act and appoint highly-qualified intellectuals as vice-chancellors," KCR said.

MIM Floor leader in the Telangana Assembly Akbaruddin Owaisi lashed out at the TRS government for its decision to ban the uploading of GOs (government orders) on its official website. Owaisi said that while the UPA government had brought in the Right to Information Act to ensure transparency in governance, the TRS was doing the opposite. The MIM MLA said that the TRS appeared to be scared for some reason. Replying to the remarks, IT and Panchayat Raj Minister K T Rama Rao said that the TRS government had no reason to be afraid and if the citizens wanted, they could still access information under the RTI Act.

KTR said the government had decided to stop uploading GOs due to the menace of "professional blackmailers". There are people who wait for the uploaded GOs to file petitions in court and stall the government from implementing decisions, he claimed. Owaisi said this was not acceptable because people wanted to know about policy decisions and development initiatives of the government. Similarly, the Opposition too could not get any details due to the ban. He demanded that the move to stop uploading of GOs be revoked.

Who is Nagarjuna jealous of?

Who is actor Nagarjuna jealous of? His co-star in Oopiri, Tamil actor Karthi. This is because Karthi romances Tamanna in the soon-to-be released movie which is a remake of the French film The Intouchables. Nagarjuna, who plays a character on a wheelchair, said with his usual charm at the audio release that he felt jealous because Karthi got to dance with Tamanna while he only got to watch. The film is being simultaneously released in Tamil as Tozha.