The whole business of prohibition in Gujarat is a big charade. It is soggy wet so those who want to drink, get enough of it but for a price. 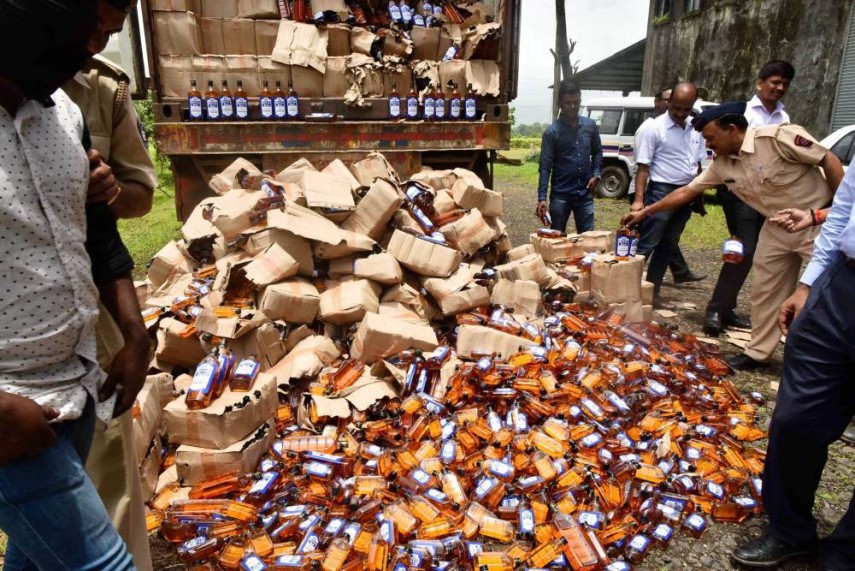 Gujarat and its 'model' have been the toast of the Indian season ever since its Chief Minister, Narendra Modi became the Prime Minister in 2014.This includes its liquor prohibition policy which has adherents like Bihar now where Nitish Kumar came to power after knocking the wind out of Modi's sails!

Billowing in the political clouds ever since, are propounded perceptions of a 'dry' India. Kumar could do with a closer look at adversary Modi's 'model' state before giving wings to his national vision.

Proud and boastful of the fact that it has been the only state in the country which was born 'dry' and continues to remain so till date, Gujarat's much hyped liquor 'totalitarianism' took a humpty-dumpty like fall last week when over 20 people died after consuming hooch near Surat. What has now become a standard drill after decades of practice, is in place. Newly anointed Chief Minister Vijay Rupani is making all the right noises. Top cops and district heads-transferred, smaller fry suspended. The anti-terrorist squad (ATS) chief took charge of investigations. A three-man top cop panel headed by additional director general of police (ADGP), looked into the matter and submitted its report to the state home department head. Within 24 hours over a thousand country liquor cases registered. Carton loads are being seized at entry checkpoints into the state. A full blooded search for the culprit methanol is under way. Blah, blah, blah and the farce goes on.

Consumption or possession of liquor without a valid permit is a non-bailable offence in the state. A person arrested on either count has to be produced in court to be bailed out. And yet it oozes Bacchus brew from every nook and cranny of its ample frame.

Booze, as the upwardly mobile call it, is lucrative business and according to conservative estimates, a Rs 30,000 crore annual turnover, pure black money spewing industry. While Prime Minister Modi may have pulled out all the stops to unearth Indian black money stashed abroad, his decade and a quarter year stint as chief minister of the state, failed to dent the business. In fact, to be fair to him, no chief minister who held office in the state was ever able to stem the flow.

The business has three components. At the bottom of the pyramid is the poor man's drink--hooch, lattha or moonshine. Then follows the desi or country liquor which is the preferred drink of rural Gujarat followed by brewery liquor at the apex (rum, whisky, gin, vodka etc). Hooch is the preferred drink of the urban labour class while 'desi' distilled, largely for captive consumption in villages, ranks safer and a notch higher. The fruit liquor 'mahua' ranks in this category. With a consumer base of the middle and affluent class in cities and towns, Indian Made Foreign Liquor (IMFL) as brewery made liquor is called in official parlance, holds sway. Country liquor is a cottage industry but brewery liquor flows into the state from MP, Rajasthan, Maharashtra even Punjab and Haryana.

Let's take the case of Gujarat's biggest city Ahmedabad. A network of about 1000 bootleggers sell anywhere between 1.5 to2 lakh litres of moonshine per day. Women outnumber men in this business. This is besides the IMFL business where the brand of your choice is home delivered to you. The trade is tech-savvy and 'whats app' and other suchn mobile applications come in handy. Surat is reported to guzzle 50,000 litres per day and almost 70 per cent of the 18,000 villages in the state brew their own country liquor. All major cities report high consumption and rural areas are no exception. There are 61,000 health permit holders in the state and worth of the average daily consumption of alcohol to permit holders is put at around Rs 75 lakhs.

No bootlegger can operate in Gujarat without police connivance. At every 'point' of the operation, negotiations have to be done with the cop for a certain amount of money and this goes right up to the top and from there to the political top brass. The cops may be sloppy in policing but would be the envy of management experts in planning and distribution of ill-gotten spoils.

Thus it is the huge amount of unadulterated black money greasing the administrative-political system in Gujarat that ensures a high decibel sound and light show only for the benefit of the masses with little or no follow-up action. Take the case of the 2009 hooch tragedy in Ahmedabad where 150 people lost their lives. Modi, then the chief minister, made all the appropriate noises. A Commission of Inquiry was instituted with former High Court judge K M Mehta as the chairman. The panel submitted its report in 2011 and there has been pin drop silence thereafter. The Gujarat Vidhan Sabha was quick to amend the pertinent act provisioning for even death penalty for those convicted in spurious liquor cases. The Bill was cleared by the then Governor Dr Kamala Beniwal. Not a single person has got life imprisonment thereafter, let alone terminal punishment.

The whole business of prohibition in Gujarat is a big charade in which everyone is happy and the only ones who stand to lose out are the people. Gujarat is soggy wet so those who want to drink, get enough of it but for a price. The cop is happy, he gets his cut and the politician in power more so because he gets a fair share as well besides the rip off from transfers and postings by playing favourites. Right from the sub-inspector to the DGP, the transfers are all at the behest of the Home department and the politicians who preside over it. The bootlegger is happy because he still manages to make money for himself despite all the pricks and cuts. It is only the honest tax payer who gets fobbed because the state loses a huge amount of money in excise and allied duties. Never mind this common man, he was in any case, born to bear the burden of the cross. Moonshine for the earthy, sunshine for the dirty.