'I Am Against The Bloody Movies From Hollywood'

'...the computer games on screen. The films of various countries should show their own vision and truth about life,' says the celebrated Liv Ullman who was in Delhi to receive the Lifetime Achievement award at the International Film Festival of India With a father who was a Norwegian engineer working abroad, Liv Ullmann lived as a child in Tokyo, Japan, Canada, New York, Oslo and Norway. In the middle of the 1950s she debuted at the theatre and soon after, in 1957, also at the movies. Her career, already established in both media, became more successful when she met Swedish director Ingmar Bergman for whom she played some of her best roles like in En Passion (1969) and Ansikte mot ansikte (1976). Her international career began with Abdication (1974) or La Diagonale du fou (1984).

Though born a citizen of Norway, Ullmann didn't set foot in her homeland until she was seven years old. As a youngster, after having decided to make acting her career, she studied at the Webber-Douglas academy in London. Ullmann began her stage work in Stavanger and Oslo, and in the late 1950s, she starred in the Norwegain production of The Diary of Anne Frank.

Ullmann's breakthrough role was that of catatonic actress Elizabeth Vogler in Ingmar Bergman's Persona (1966), a part she landed primarily because of her striking resemblance to co-star Bibi Andersson. Bergman became Ullmann's mentor and they lived together for several years, during which time their daughter Linn Ullmann was born. Linn would later occasionally appear in her mother's films.

Ullmann was honoured with numerous New York Film Critics awards during the early 1970s. She also earned Oscar nominations for her work in The Emigrants (1971) and Bergman's Face to Face (1976), and has received eight honorary college degrees.

Ullmann's attempt to establish herself in Hollywood was largely unsuccessful, though she received a Golden Globe nomination for her performance in 40 Carats (1973). She fared rather better on Broadway, starring in a 1977 revival of Anna Christie and a 1979 musical adaptation of I Remember Mama. In 1977 she wrote her memoirs, Changing, prematurely as it turned out, since she had many years' work ahead of her. During the 1990s, Ullmann turned to directing, helming the theatrical features Sofie (1992) and Kristin Lauransdotter (1995) as well as the 1996 Swedish TV mini-series Enskilda Samtal.

She continues to direct and act in numerous films and TV serials and her recent directorial venture on the big screen was Trolosa?Faithless (2000).

In between receiving the Lifetime Achievement award at the International Film Festival of India and rushing to Agra to wallow in the "enormous experience" of seeing the Taj Mahal she effortlessly shows that the "woman of substance" tag holds meaning when you associate it with her name. She showed it to the Indian media by merely speaking her mind. And everyone listened. Now you know how she could reduce Shabana Azmi to a giggly fan.

"I am tired of acting, of seeing expressions on my face. I want to see other faces, their fantasies," says Liv Ullmann. Clearly, there can be no limits for her, even at 64. So even as the legendary Norwegian actress-director and UNICEF goodwill ambassador gets busy with the pre-production of her new film, based on Henrik Ibsen’s The Dolls House, she has the time, energy and inclination for a lot more.

Be it the two ugly incidents at the festival venue, the state of world politics, the issue of the technological takeover of cinema, or the eternal query about her association with Ingmar Bergman, she has a lot of views to share, many stories to tell.

On the rape of the Swiss Diplomat
I was shocked by what happened but the festival authorities are not to blame. What is happening to women is what is happening to the rest of the world today, with wars and terrorism. But the warlords who sit at the table and talk of peace should realise that the victims are no longer the soldiers, it’s the women, the children. The battlefields are the homes. We have become too disrespectful of people, of other human beings. We need to build a community based on respect.

On IFFI
IFFI is so much more than a festival. We are looking at possibilities of artistic communication and exchanges between India and Norway. And we need not wait for the governments to make that happen. We can become friends, cross borders without guns, with just warmth and humanity.

On Ingmar Bergman
I did 11 films with him. I was acting before I started working with him, but he proved to be the best interaction I’ve had with a human being as a co-artiste. He taught me to respect the medium. How privileged we were to be in this business of creating images and telling stories! He used to go for the best -- the best actor, the best cinematographer, people who could make him do even more than what he set out for. 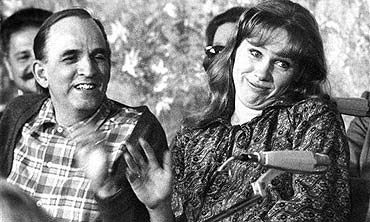 The only person who could raise questions with him was Ingrid Bergman. 'Why was he so tough on women?' we wondered while filming Autumn Sonata. We did try and act a little against the lines. The two quarreled over the characters -- you could hear their high voices in the corridor. Bergman, like any other auteur was very protective about the written word.

I played the lead in his latest film, Saraband (2003) which is set 30 years after his earlier film Scenes from a Marriage where the two protagonists meet again. They are not young and happy any more. The film is intertwined with Bach’s music. It’s a sad, dark movie.

Bergman shot it in digital format. It confused him. At 85 he was not scared of the new technology but was not happy with it either. Others wouldn’t have felt it but we used to have a monologue, an exchange of thoughts across the monitor. Like Indians, we used to send smoke signals across to each other while shooting the film.

On her various performances
As a young actress I could never say no - I was flattered that I was chosen to play a certain character. Now I can. I always look for what it is that I recognise about a certain character and then work out what feelings to show to the camera. It springs from within me, from my experiences, the people I’ve met. I use what I know from my experience, face and age.

On today's cinema
I am against the bloody movies from Hollywood, the computer games on screen. The films of various countries should show their own vision and truth about life.

On technology
It frightens me. I can’t use a computer, I don’t want to either. I have no email address. Technology can never be a part of my life and art.

On films she’d want to see
I would like to see more films about elderly people. "We" need to be recognised and seen. I am against the cartoons, the Spiderman kind of films. It’s so sad that it’s what cinema has become reduced to. Movies are a way by which so many people can meet in a darkened room, it’s a wonderful way of communicating. That’s what movies should be. But now they’ve just become sounds.

On Indian films
You have your own culture, the song and dance with which you relate to each other. It may look over the top but that’s you. Unfortunately you also make a lot of stupid films, like Hollywood.