'I Crossed From Iran To Pakistan While Working With RAW': Islamabad Releases Kulbhushan Jadhav's 'Confessional' Video

Jadhav, in the video that was apparently shot before he got to meet his kin, said he had requested to meet his family members and that he was grateful to the Pakistan Government for letting that happen 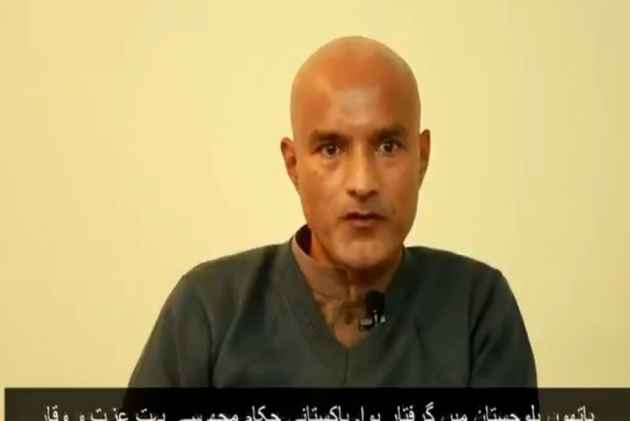 Moments after the mother and the wife of former Indian Naval officer Kulbhushan Jadhav met him in Islamabad, Pakistan's ministry of foreign affairs (MoFA) released another "confessional" video of his, in which the convicted alleged spy was seen confessing that he did cross from Iran to Pakistan two years back.

Jadhav, in the video that was apparently shot before he got to meet his kin, also said that he had requested to meet his family members and that he was grateful to the Pakistan Government for letting that happen.

"I crossed from Iran to Pakistan about two years back while working with RAW. I have been treated with dignity and honour and in a very professional manner by the Pakistani authorities," Jadhav said, in the video.

I have been treated with dignity and honor - Kulbhushan Jadhav pic.twitter.com/YTGUXUfJqq

He added: "I requested meeting my wife on humanitarian ground and I have been informed that my mother and wife are going to meet me today. I am really thankful to the government of Pakistan for showing this grand gesture."

In another video released in June, Jadhav had 'admitted' to his charges of "espionage and subversive activities."

"Today I genuinely after the time having spent in Pakistan I feel very ashamed and l genuinely seek pardon of the acts and sins and crimes I have committed here against the nation and the people of Pakistan," he had said, in the video.

Jadhav's wife and mother, before finally meeting him, visited the Indian High Commission in the Pakistani capital, after which they moved to the Pakistan MoFA building.

Pakistan Rangers, Anti-Terrorism Squads (ATS) and sharp shooters were deployed at the roof tops, in view of the meeting. Other than media and security personnel, no other traffic was allowed in the area around the Pakistan MoFA building.

Pakistan had agreed to facilitate the visit of Jadhav's family and also assured their safety, security, and freedom of movement in the country.

Meanwhile, the Pakistan foreign office, in a statement, clarified that Jadhav was not given consular access.

Pakistan foreign minister Khawaja Asif, during his earlier appearance on Geo News' programme 'Naya Pakistan', had said that India was given consular access to the convicted Jadhav, describing it as a "concession." He added that Pakistan had allowed Jadhav's meeting with his kin purely on "humanitarian grounds."

Islamabad has repeatedly rejected New Delhi's plea for consular access to Jadhav at the International Court of Justice (ICJ), alleging he was not an ordinary person and had entered the country with intent of spying and carrying out sabotage activities.

Dismissing India's stance on Jadhav, Pakistan submitted its reply to the ICJ in the case on December 13. The reply, which was submitted by the Foreign Office's Director, Fariha Bugti, also claimed that Jadhav's case did not fall under the purview of the Vienna Convention.

Pakistan's reply came after India submitted a written response to registrar Philippe Couvreur of the ICJ in the same case in September this year.

Jadhav was arrested in March this year, in Balochistan, Pakistan, over charges of alleged involvement in 'espionage and subversive activities for India's intelligence agency - the Research and Analysis Wing (RAW).'

India, however, maintains that Jadhav was kidnapped from Iran where he had business interests after retiring from the Indian Navy.