Having served the league for the longest period and having three titles between them, it will be a fight between the two proud clubs. 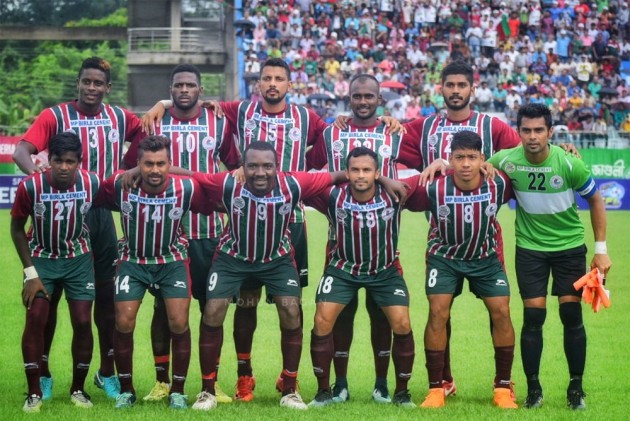 Two of the three unbeaten sides so far in the I-League 2018-19, Mohun Bagan and Churchill Brothers take on each other in a high-stakes match at Yubabharati Krirangan, Kolkata on Sunday.

Both the clubs will be aiming to keep their winning momentum. A win for the hosts will be good enough to keep the momentum with the leaders Chennai City. For the visitors, they can't afford to slip up in their bid to challenge for the title.

Having served the league for the longest period and having three titles between them, it will be a fight between the two proud clubs.

Bagan have eight points from two wins and two draws while Churchill have a less win and a draw more to be well placed on the points table.

The strikers of both teams have started to fire and both have remained unscathed through tough outings and it remains to be seen if one buckles or both play out a battle of attrition on Sunday in front of an imminently large partisan crowd.

Mohun Bagan coach Sankarlal Chakraborty has little to worry about in defence and attack, however, his midfield has always looked like a work in progress. No doubt he must be building up towards the full repatriation of Sony Norde in that left-wing position but he needs to get more out of his other attacking medios.

He seemed focused on Sunday's game as he shared his thoughts in a pre-game chat, saying: "We are concerned about everything including their foreigners who can turn the fate of the match single-handedly on their day."

On Sony Norde's chances, he quipped, "Sony is fit but the medical staff will take the final call whether he is ready to play 90 minutes."

He signed off saying, "Our last win has been a good mental-booster for us. We have to make it a habit to keep on winning."

Churchill need to get Trinidadian Willis Plaza to keep improving his strike rate. He does get himself to great goalscoring positions, some of them awe-inspiring, but his conversion still remains below par and the hat-trick in the previous game should give him more confidence.

His combination with Gambian Dawda Ceesay is potentially lethal when on song and Mohun Bagan's defence led by Nigerian Eze Kingsley will have to be on their toes.

Likewise, Churchill need to be wary of the Kisekka-Dicka combination upfront for Bagan who do have a penchant for making telling contributions more often than not.

Hussein Eldor and Nenad Novakovic will have their hands full for Churchill as well and all in all, it promises to be a cracker of an encounter.

Churchill's Romanian coach Petra Gigiu sounded quietly confident and seemed to be enjoying being in the footballing city sharing in the pre-game chat.

"I am happy to be in Kolkata. We played four games but the real exam begins now. Mohun Bagan is a great team with great tradition. The club is special for the spectators and the heritage. Yes, we watched a few matches of Mohun Bagan on television. They are strong in every department. It's not going to be an easy game at all. We'll try to play a good game. Results will follow then," Gigiu said.

For the statistically minded, since the 2000s Mohun Bagan have had the better of the exchanges winning eight to the Goan side's five in head to heads. There have been 10 draws. Mohun Bagan have also been better off in recent encounters winning five of their last six games.