I Think Of Cinemas, Panoramic Sleights 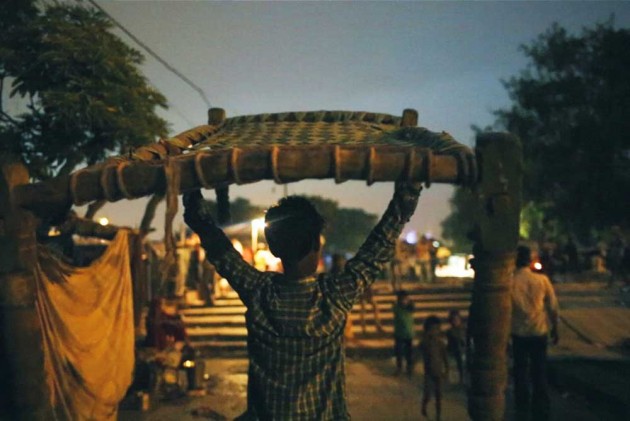 In the opening scene of Shaunak Sen's documentary, Cities of Sleep, we hear the clink of a watchman's stick on the wide boulevards of Central Delhi. The streets are empty, save a lonely dog. Cities of Sleep does away with romantic notions of the homeless improvising a makeshift bed in random parks and passageways. We are about to see how sleep, upheld by the Indian Supreme Court as a fundamental right[1], comes to be regulated by hierarchies of private property, turf-lords, and the state. Cities of Sleep captures the half-awake, somnolent daze through which a man named Shakeel navigates this complex nocturnal economy. To sleep while homeless in Delhi is to enter relations of financial and social debt.

The film brings an intent humanistic gaze to Shakeel and his nightly wanderings. The viewer wonders how the camera and Shakeel bonded in the first place. Compared to other men in the film who are almost poetic in their alertness, their bodies yoked to labour, Shakeel brings an indifferent, perfunctory attitude to his ongoing task of begging for money and foraging for sleep. The camera follows Shakeel, often seen wearing a secondhand woman's coat, to an open-air sleepers' market. The market is run by the charismatic turflord , Jamaal Bhai. Although he first appears as a simple chaiwallah, we find out that Jamaal oversees the nightly dealings of charpais, or woven cots, in the sleeping colony, along with his strongmen who keep order, collect dues, and when needed, evict sleepers. In Jamaal's company and amid the lights and music of the market, Shakeel must deploy his limited powers of persuasion. He has no special talent, such as reciting poetry or playing instruments — the skills other men use to negotiate an affordable bed. Rather, most of Shakeel's sleep is gotten on credit through persistent nagging. This is not the quintessential "hand to mouth" existence. Rather, it is bare subsistence, and one that quickly mounts into debilitating debt.

The camera tracks over Shakeel's shoulder. We see him roam through a mass of bodies under red blankets (the sleepers' market at Meena Bazaar accommodates up to 5,000 men), into Jamaal's familiar but fickle company, where, after a cup of tea, he is turned away. He trails to a nearby government shelter. Its gatekeepers, a streetwise and compassionate crew of men, peer into a large registry. They can make room. But order is a problem in this tightly enclosed den of bodies. Even under the glare of tubelights, someone loses their money and accuses Shakeel of theft, driving him away.

Despite his ongoing struggles with fatigue, Shakeel finds mirthful moments. In one scene, the lo-fi, dim view of the camera shows Shakeel celebrating a birthday with friends. He cuts a cake and dances to Hindi songs. This is the calm before the literal storm. Cinematic tension is building with the imminent arrival of the winter rains. Jamaal and his men are unable to keep the beds dry, the government shelter overfills, and the sleepers become dangerously vulnerable to illness.

Balancing the one-man focus, the filmmakers introduce a parallel plot in which we see the operations of the "night theatre" — a makeshift cinema constructed under the colonial-era Loha Pul, or Iron Bridge, of Delhi, where migrant working-class men, for a few rupees, watch films intermittently with sleep. Here, the use of a wide-angle and graded perspective reveals an entire ecosystem of human and material life — a bridge riveting under traffic, and the din of daily activities such as men bathing in the Yamuna and hanging sheets to dry. The geometry of the bridge — its many sharp trusses, long beams, and low-lying piers — provides a formal, stable energy for the scenes; a contrast from the seemingly chaotic and capricious Meena Bazaar. The striking architecture of the bridge recalls Walter Benjamin's description in the Arcades Project of iron as a social-revolutionary material.[2] The deep recesses of iron architecture, for a part of history, were accessible only to engineers and workers. In Cities of Sleep, it is not the working class, but a more precarious, floating labour class that resides within the intimate architecture of the bridge, accessing its wonders and affordances of space. No wonder Loha Pul is a visual fixation in the film. It houses nearly 900 sleepers while providing a skeleton for light, air, and views of the river to filter through.

Iron forged what Benjamin described as the confluence of art, engineering, and the public utopic imagination, especially fantasies of transit and verticality. The camera indulges this fantasy, scanning the height of the double-storey bridge. On the upper level there are trains, on the second level, hand-pulled carts and two-wheelers, and underneath, a night cinema —where labourers who pull cargo "upstairs" by day, watch B-films by night. Much like in the army barracks, men are busy with a variety of leisure activities in the comforting underside of the bridge. Some are attentively watching films; others are writing letters, texting their families, or being lulled to sleep by cinema tunes. The camera, then, cuts the heavy structure of the bridge by focusing on the small interactions and economies that unfold underneath it. One scene lingers on a shopkeeper managing a stall of cigarettes and other items that service the bridge community. The shopkeeper also tends to his young son and daughter, who hover around him. He is shown covering the children with mosquito cream as they drift to sleep, giving a sense of familial togetherness amid a crowd of men.

Interspersed through the film are face—to-face interviews. Along with Shakeel we hear from several prominent figures, such as the reflective entrepreneur named Ranjeet who runs the night cinema. Shakeel and Ranjeet have structurally opposite roles. While Shakeel is the tired and disoriented, inarticulate body impinging on our sight, Ranjeet is an astute fellow-observer. He assists the filmmakers in analyzing men's work, their poverty, and the role of cinema in softening the edges of life. He reflects with profundity on the rhythms of the Yamuna and the rhythms of sleep. Ranjeet's objectivity is alluring; he remains separate from the otherness of the sleepers, but also guards their dignity and privacy.

The filmmakers construct some illusion of privacy as well by using partitioning images such as lines of bedding out to dry, keeping a distance from the working, sleeping bodies of men. There is a sense of a reluctant camera that repeatedly turns away from the sleepers and towards the surreal cityscape. The diversions seem necessary. As voyeurs who infringe on space, we are also subject to the mimetic potential of fatigued bodies. In one scene, the rains have all but paralyzed the operations of Meena Bazaar. Shakeel is desperate for sleep, and makes a risky foray into manicured Central Delhi. We are shaken as his exhausted body finally collapses onto our vision. Moments of visual diversion to wandering dogs and the surrealist-mechanical city then are much-needed moments of repose. But there is a risk in the film of distancing the body by turning to landscape. No doubt, long panoramic shots of the ambient night stand for alienation and escape, and built structures are "documents" that can render the sociology of the moment clear. But we miss how the city tracks into, and out of, the soul of the person. Perhaps the city could be approached differently by paying attention to something like dreams, which, much like the meandering dogs in the film, become inscribed in space, yielding new coordinates for us to follow. As it is, in Cities of Sleep, various stray animals frequently take the visual relay for a few seconds, marking a cinematic aporia.

This turning away from intimacy and toward the city is interrupted near the end of the film when Shakeel visits his father's home in Assam. The journey marks an optic transition from darkness to clarity, city to village, and stranger sociality to kinship. The camera, now fixed in rural space, begins to discover a new Shakeel. For one, we learn Shakeel is actually Hindu. In the village, he gets drunk and discloses to the camera that he had brutally abused his former wife. The mise-en-scene of the village — the local temple, abandoned home, and aging father clinging to his government job — are bodies that bear the marks of trauma, allowing secrets to come forth that were disguised in the city. We are enervated less by the sensorium of the city and the tired body. Rather the film brings out the body of the village, where memories of conflict and loss are almost frozen.

Shakeel is unable to deal with the "stickiness" of village time[3]. As he says, dil nahin lagaa — his "heart didn't stick." He returns to Delhi, only to find the familiar nocturnal landscape there has drastically changed. His journey of waking and sleeping begins anew.

Megha Sharma Sehdev is pursuing a doctorate at the Department of Anthropology, Johns Hopkins University.