While Afghanistan will be fancying their chances against a demoralised South Africa side, the Proteas would be more than keen to live up to their past reputation and make a statement against the Asian minnows when they face off in the 21st match of the ICC Cricket World Cup 2019 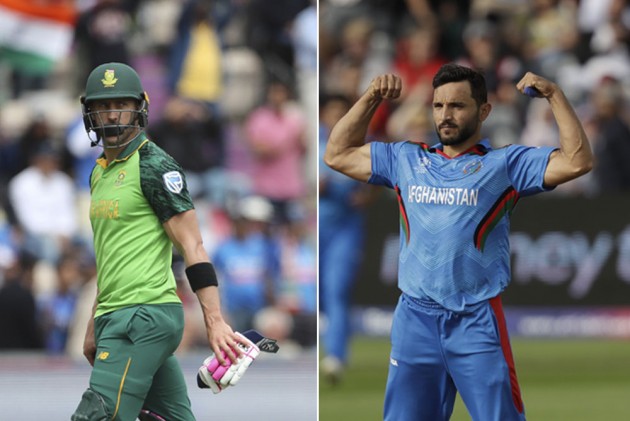 Winless so far in the tournament, both South Africa and Afghanistan will be eagerly looking to tick the victory box when they take on each other in a World Cup encounter at Sophia Gardens, Cardiff on Saturday.

Down and out, the two bottom-placed teams know that this will be their best chance to post their first win in the ongoing 50-over showpiece.

This is perhaps the first time that South Africa, from the very beginning, were never in contention to make it to the semifinals but remaining winless after four matches is something unexpected.

Also Read: Shahzad Ruled Out Of Tournament With Knee Injury

After three straight losses against England, Bangladesh and India, their fourth match against the West Indies was abandoned due to rain.

Afghanistan faced a similar fate, losing all three of their matches till now to defending champions Australia, Sri Lanka and New Zealand. However, the players of the war-torn nation can take confidence from the fact that they gave a good account of themselves against the Sri Lankans and almost pulled it off.

While Afghanistan will be fancying their chances against a lowly South Africa side, the Proteas would be more than keen to live up to their past reputation and make a statement against the Asian minnows.

South Africa have been mostly done in by their inexperienced batting line-up, coupled with injuries to a few of their key players. The Protea batsmen have been struggling, and even in the wash-out game against West Indies, they were down at 29/2 before the match was called off.

Experienced Hashim Amla has been in dismal form and the semi-finalists of the 2015 edition can only hope that their veteran batsmen start to fire.

The responsibility rests on the shoulders of skipper Faf du Plessis and Quinton de Kock and the two will be expected to bring their 'A' game into the fore against Afghanistan.

Batting remains a concern for Afghanistan as well and with Mohammad Shahzad back home due to fitness issues, they will have their back against the wall.

It would be an uphill task for the Afghanistan batters against the likes of Kagiso Rabada and Imran Tahir.

Just like their rivals, the Afghans would also be banking on their bowlers led by leg-spinner Rashid Khan.