Pawar's warning came a day after Maharashtra reported 8,067 fresh coronavirus positive cases, as much as 50 per cent more than Thursday. 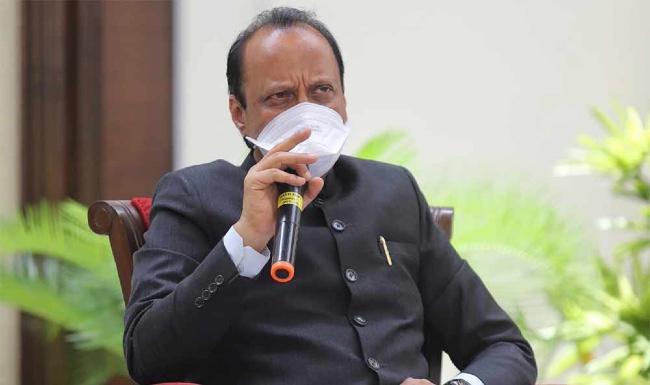 More than ten ministers and at least 20 MLAs in Maharashtra have tested positive for coronavirus so far, Deputy Chief Minister Ajit Pawar said on Saturday and added that strict restrictions might be clamped if the new COVID-19 cases continue to rise in the state.

"We cut short the Assembly session recently. So far, over 10 ministers and over 20 MLAs have tested positive for coronavirus. Everybody wants to be part of the celebrations of New Year, birthdays and other occasions. Keep in mind that the new variant (Omicron) spreads fast and hence caution is needed. PM Narendra Modi has appealed and some states have announced a night curfew. In Maharashtra, cases are increasing in Mumbai and Pune," he told reporters after visiting the Jaystambh military monument in Perne village on the occasion of the 204th anniversary of the Battle of Koregaon Bhima.

Maharashtra has seen a sharp rise in new daily coronavirus cases in the last 12 days of 2021. The state government, in fresh guidelines issued on Thursday night, capped the attendance at gatherings in open or closed spaces at 50.

Mumbai on Friday reported 5,631 new COVID-19 cases, almost 2,000 more than Thursday, which took the caseload in the city on the last day of the year to 7,85,110, a civic official had said. This was a rise of 53 per cent over 3,671 cases recorded on Thursday. The COVID-19 positivity rate in Pune city touched 5.9 per cent on Friday after 412 cases were detected, raising the tally within civic limits to 5,10,218, as per officials.

Pawar said the government recently told the state legislature that land may be acquired for the redevelopment of the monument (Jaystambh) for the convenience of lakhs of people who visit the spot every year to pay tributes on the anniversary of the Koregaon Bhima battle. He said a committee has been formed to take further action.

When asked about the Maharashtra government denying permission for organising a bullock cart race and former MP Shivaji Adhalrao Patil announcing to go ahead with the event, Pawar said, "After the meeting (of the COVID-19 task force), chief minister Uddhav Thackeray directed the state chief secretary to issue orders to all collectors to avoid public gatherings to (stop) another wave of the pandemic. Based on this, the permission might have been denied in the larger interest. Not only Shivaji Adhalrao Patil but those who want to hold the bullock cart race should also consider the looming threat (of the third COVID-19 wave)".