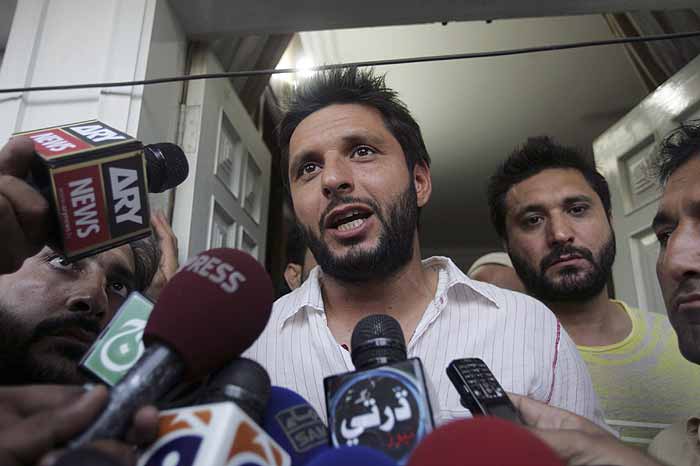 Afridi is good at bowling, batting and, perhaps, leading his team. That’s about it.

His formal education is incomplete because he started playing for Pakistan when still a teenager. That does not always matter, because " education" doesn’t necessarily free the mind or suppress prejudice.

Cricketers travel from a young age, are exposed to different people and cultures, become wise, aware and sentient. But that hasn’t happened with Afridi.

I’d interviewed Afridi when he was 16. He was no more than an overgrown child who hit the ball a mile. He was a fresh young man, forthright in his answers, speaking in a breathless manner. This was attractive at that time.

But what could be appealing in a boy of 16 could be odious when he’s a man of 31. Fifteen years later, it appears Afridi hasn’t grown much. He’s still an impetuous young lad in mind, and his criticism of India holds as much significance as the geopolitical worldview of a 12-year-old. It should be treated as such, because his awareness of the world is obviously very limited. For instance, he doesn’t seem to know, when saying that “Indians don’t have a big and clean heart like Muslims and Pakistanis”, that there are more Muslims in India than in Pakistan.

A few days ago, before the semi-final against India in Mohali, Afridi had said that he’s his country’s ambassador. But obviously, he’s no diplomat.

After landing in Pakistan, Afridi had said that he can’t understand why there’s ill-will between the two countries. Yes, it’s clear that Afridi doesn’t understand things, words and their implications. He doesn’t understand that people who are in a position to influence impressionable minds should be more sensible. And matters relating to god are complex and should be publicly broached only by the sensitive and the wise.

Afridi, clearly, is far from wise. Ideally, he should keep his mouth shut and keep hitting and spinning the ball. Or he should talk only cricket. But he speaks out in this manner only because he’s not wise. That’s the kinder way to interpret his behaviour and words, giving him the benefit of doubt. Else, he could be termed an insincere man who contradicts himself regularly, a man who foments trouble.

Afridi’s comments have raised a storm on the internet, but ideally, they should be ignored. They should not be registered, they should be expunged. Afridi is not a spokesperson of the people of Pakistan. He’s hardly the fittest man to represent a country.

He’s no more than a large man who plays with a bat and ball, with an inadequate understanding of the world. His ravings should not be allowed to make things bitter between the two countries and their people.