IMD Issues Yellow Alert For MP, 21 Districts Likely To Get Hit By Heavy Rain And Thunderstorms 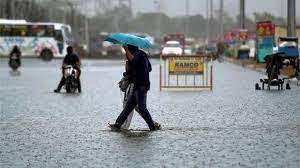 According to an official, at least eight districts in the state received heavy rainfall (64.5 mm to 115.5 mm), while Singrauli in eastern Madhya Pradesh recorded very heavy showers (123 mm) in the last 24 hours, ending 8.30 am on Thursday.

The weather department has also forecast rain or thunder showers for most places in 10 divisions of the state, including Bhopal, Indore, Gwalior and Jabalpur.

Madhya Pradesh is witnessing the second wet spell this month. The first spell had ravaged Gwalior and Chambal divisions in northern part of the state, which left 24 persons dead.

The monsoon trough is now passing through Gwalior and Sidhi, bringing in moisture and causing rains, Saha said, adding that the wet spell is expected to continue for the next two to three days.