How comfortable can one be with the glorification of the project of 'development' and 'progress' mediated by a locus of raw power, which nonetheless claims to be a moral force? Sarkar Raj, the just-released sequel of Ram Gopal Varma’s indigenised The Godfather (no matter how much he disclaims the connection) is a risky piece of goods, as was the prequel Sarkar. Only, in this one, the point is driven home twice over, with enough implications for the society that we continue to inhabit. The risk here relates not simply to the surface violence quotient of Hindi cinema--that’s been there since donkey’s years and has also been much written about--but rather to the manner in which jingoism and patriarchy get propped up in the name of the nation. That again is not essentially a novel point in relation to Hindi films, but in this film, it is more insidious because of an ostensible "modernity" of vision of the main players--those that constitute the Sarkar Raj.

Like the Corleones in Godfather, the Nagres of Sarkar Raj are political players dabbling in big money, but unlike with the Corleones, who, we never forget, are the Mafioso, or even in the indications of mafia network in the original Sarkar, Sarkar Raj is essentially about an alternate center of power which is also the moral locus of a society. In Sarkar, we have patriarch Subhas Nagre (Amitabh Bachchan) saying that he sometimes chose to work outside the bounds of law because the situation demanded it--while his workings outside the bounds of law were sought to be justified by his being some kind of de facto representative of the common man, the plot essentially centered upon the politics of power play. In the sequel, however, the power play aspect is appropriated within a moralist, "modernising" and developmental perspective that one could choose to see as extremely dangerous in the society that we inhabit.

In Sarkar Raj, the Nagre family has its muscles flexed in favor of the setting up of a multi billion dollar power plant, a project that promises "development" for the people of Maharashtra. Development is the watchword here, and the battle-lines get drawn between those that unconditionally claim the progress of their society and those for whom 'progress' and its profits is the prerogative of those in power. And those that seek to achieve that unconditional progress at all cost are, of course, the Nagres, even though what is effectively mobilised in the battle for 'development' is the mafia network at their command. In this film, power play not only gets coded in terms of the battle between Good and Evil or the Virtuous and Immoral, as is typical of Hindi cinema, it also gets played out in terms of ‘Development’ versus ‘Non-Development’, a construction that is particularly sinister for a society where modernisation via commercialism has become a watchword in recent times. 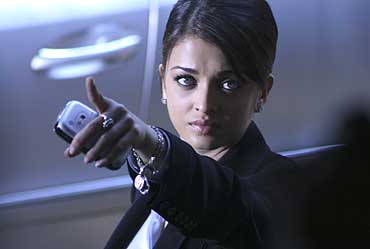 In Sarkar Raj, the story of proposed development for the people of Maharashtra gets told through the functionings of a de facto, alternate locus of power, which is also the patriarchal Hindu family. The film’s ideological workings are perhaps aptly understood through the positioning of women in its scheme of things. Within the Nagare family, the women are typically second best to their better halves--totally happy in conformity and in their deference to patriarchy. Even the lead character of the 'modern' westernised businesswoman (Aishwarya Rai) who operates outside this paradigm, and within the realm of power play that is the men’s domain, is quickly shorn of her agency in the entire scheme of things as 'her' dream project, the multi-billion dollar power plant, becomes a cause appropriated by the Nagre men. She is subsequently shown helpless when her father decides to give away her dream project to yet another power broker from Gujarat, selecting him over Shankar Nagre (Abhishek Bachhan), a man she is greatly influenced by.

The 'development' component gets planted into the realm of raw power symbolized by the Nagres and their political opponents. In the process, the project of 'development' gets mediated by a locus of raw power, which nonetheless claims to be a moral force. Herein lies Sarkar Raj's difference from the genre of mafia films that its prequel could be placed in--from being glorified mafia power-players in the prequel, the Nagres of Sarkar Raj emerge as the mediators of the nation. It’s a story only too probable in our country, where power structures such as symbolised by the Nagres have mediated every part of the nation’s transition into cyber age and a globalised economy.

The essential question here is: How comfortable can one be with such kind of mediation of 'development' and 'progress' getting glorified on the big screen vis-à-vis undeniable star power? Amitabh Bachchan and Abhishek Bachchan are a formidable duo onscreen as Nagres Senior and Junior, who not only fight for 'development' but also symbolize the moral locus in the world of Sarkar Raj. The message they carry--in our country, 'good development' continues to be one that is mediated by patriarchal power structures, which may, as well, operate by laws of their own making. That possibly indicates why 'development' still remains elusive for so many Indians.