Imran Khan Prepares To Form Govt In Pakistan, Reaches Out To Independents And Others

Khan led his Pakistan Tehreek-e-Insaf (PTI) party to victory in the parliamentary elections this week, amid a growing consensus among South Asia experts and Pakistan-observers that it was greatly influenced and meddled by the strong Pakistani Army. 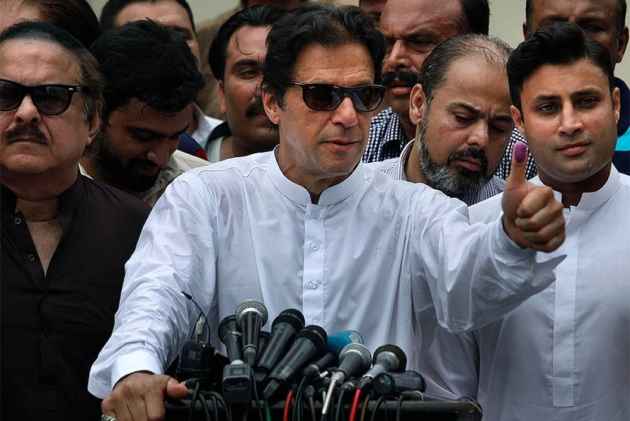 Imran Khan has started reaching out to leaders of different political parties and independent candidates to form the next government in Pakistan after his party won a majority of seats in Parliament, according to his party officials.

Khan led his Pakistan Tehreek-e-Insaf (PTI) party to victory in the parliamentary elections this week, amid a growing consensus among South Asia experts and Pakistan-observers that it was greatly influenced and meddled by the strong Pakistani Army.

The PTI has so far bagged 115 of the 270 National Assembly (NA) seats on which elections were held, according to the Election Commission of Pakistan which has released results on 267 seats.

Pakistan's NA - the lower house of Parliament - comprises a total of 342 members, of which 272 are directly elected. A party can only form the government if it manages to secure 172 seats in total.

Khan yesterday met Saudi ambassador Nawaf Saeed Ahmad al-Malilki in Islamabad. The two discussed bilateral relations and agreed to further deepen the ties during the tenure of the PTI government.

According to PTI sources, Khan has consulted his party leaders about the federal cabinet and formation of government in Punjab where PML-N is also in the race.

The multi-party meeting called to devise a joint strategy over alleged rigging in the general elections rejected the results of the poll yesterday, demanding a "transparent" re-election. The meeting in Islamabad was chaired by PML-N president Shehbaz Sharif and Muttahida Majlis-i-Amal (MMA) president Maulana Fazlur Rehman.

Meanwhile Khan also took his party leaders in confidence about government formation in Khyber-Pakhtunkhwa where the PTI has won a majority of seats and will easily form the government.

It is likely to retain former chief minister Pervaiz Khattak for the top job in the province despite some reservations about his performance.

Khattak is considered to be close to Khan since school days as both studied in the same Atchison College in Lahore.

The party is also trying to have a coalition government in Balochistan.

Khan has still about three weeks to prepare for the government before the mandatory session of the National Assembly (NA) is called after elections.

As per the law, the President of Pakistan should convene the maiden NA session within 21 days of election to give oaths to lawmakers and elect the new speaker.