Election officials announced on Friday Pakistan's Tehreek-e-Insaf (PTI) party is leading 109 out of 269 seats in the National Assembly. 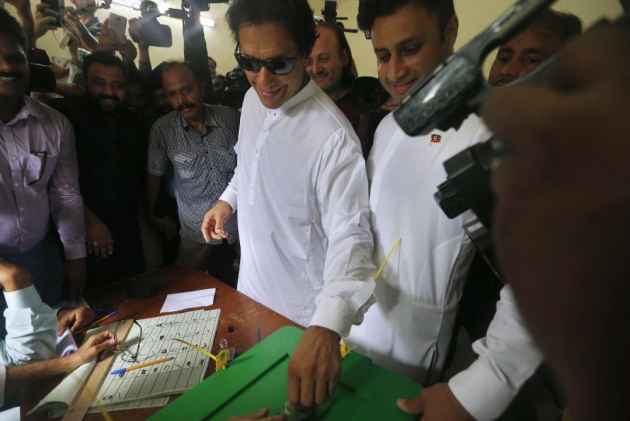 Cricketer-turned-politician Imran Khan's party on Friday emerged as the single largest in Pakistan's parliamentary polls bagging 114 of the 270 seats on which elections were held, but fell short of a majority and will need the support of smaller parties or independents to form the government.

Pakistan's National Assembly comprises a total of 342 members, of which 272 are directly elected. A party can only form the government if it manages to clinch 172 seats in total.

In his first speech that was broadcast live via video link on Thursday, Khan claimed victory in the elections and said that he was ready to investigate allegations of rigging in the polls.

"Anyone who has issues of rigging; we will help you facilitate and we will open up any constituency that you want for investigation," Khan said, amid allegations by the six major parties, including PML-N and PPP, of foul play in the counting process.

However, PML-N supremo Nawaz Sharif reiterated his party's allegations, saying the polls had been "stolen" and the "tainted and dubious" results would cast a "bad impact" on the country's politics, according to a number of his party leaders who visited the Adiala jail in Rawalpindi to meet him after the elections.

Karachi-based Mutahida Qaumi Movement (MQM) is among the biggest losers as it got just 6 seats out of 20 in Karachi, according to ECP results.

In the 342-member National Assembly, the PTI's strength will be 160 after acquiring 29 women's reserved seats and 4 or 5 reserved seats for minorities, according to experts.

Khan's ally PML-Q has won five seats and it can also have one seat reserved for women. Sheikh Rasheed of the Awami Muslim League is already supporting Khan.

Some independent winners from the tribal region are in talks with PTI and they could extend their support to Khan, helping him attain the figure of 173 which is a simple majority, they said.

Some smaller Baloch parties and MQM could also support Khan, they said.

The elections for the parliament and four provincial assemblies were held on Wednesday and the announcement of the results has been marred by delays in transportation of results from polling stations to centralised election offices.

The results showed that in the provincial assemblies PML-N was leading in Punjab - the most populous province - with 127 seats in the house of 297, but fell short of a majority.

Khan's PTI with 123 seats is negotiating with independents, most of whom parted ways with the PML-N before the polls and contested independently.

The independents with 29 seats are the third largest group and will play a crucial role in the formation of the next government in Punjab, which has been ruled by the PML-N for the last two terms from 2008-2018.

Khan's ally PML-Q has got seven seats in the province.

In the 297-member House, 149 seats are required to form the government.

The PTI has already announced to form the government in Punjab, a move which may lead to allegations of horse trading.

In Sindh assembly, the PPP has got a clear majority by winning 74 seats in the house of 131. It is followed by PTI with 22 seats and MQM by 16.

In Khyber-Pakhtunkhwa, the PTI has won a two-thirds majority by bagging 66 seats in the assembly of 99 members, whereas MMA is the second largest party with 10 seats.

In Balochistan, the newly-formed Balochistan Awami Party (BAP) is on top with 13 seats but failed to get a majority in the House of 51 members. MMA is the second largest party with 9 seats. Balochistan National Party and independents have won five seats each while PTI received four.

PML-N chief Shehbaz Sharif has convened an All Parties Conference (APC) later today in Islamabad and PPP, MMA, MQM and several smaller parties are expected to attend it.

The election marks the second democratic transition of power in Pakistan's 70-year history. The military has ruled Pakistan through various coups for nearly half of the country's history since independence in 1947.