Courage of convictions, forthright views and guts to express them fearlessly 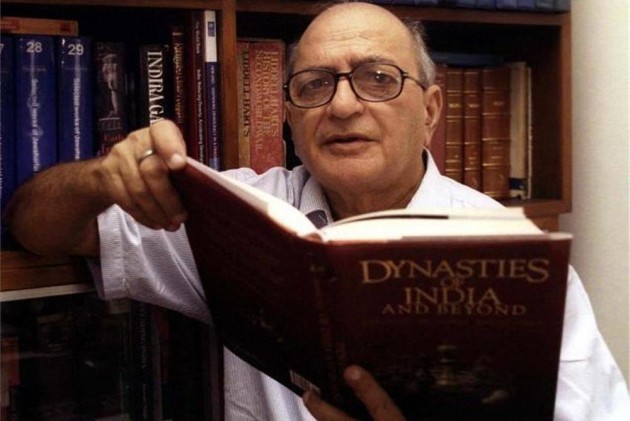 Inder Malhotra, who passed away on June 11, was one of India’s best-known editors and political commentators.

He was prominent among those who lent a new dimension to Indian journalism and gave it a status.

Also, he was one those outstanding journalists who was admired and respected outside India as well. He was the India correspondent of The Guardian, London, from 1965 to 1978.

A vastly experienced journalist, Malhotra knew the pulse of the interesting, intriguing and often turbulent politics of this country, having seen India, and covered it extensively, from the days of Jawarhal Nehru down to Narendra Modi.

He was a witness to many events in India’s history, not just the Independence and the Emergency and its aftermath, and wrote about them objectively.

He was firmly of the view that the Emergency was “the cardinal sin”, that Indira Gandhi’s handling of the Punjab crisis was “inept” and that Rajiv Gandhi was very popular in his initial years in office, but his "attempt to please" conservatives among Muslims and Hindus cost him the support of both.

Keen eye for observation, courage of convictions, forthright views and guts to express them fearlessly were among Malhotra’s many endearing qualities.

Undoubtedly, he was a man of strong intellect and erudition. He was well-versed and well-read in a wide range of subjects, often giving the impression of writing effortlessly and brilliantly even on the most serious of topics.

Inder Malhotra was born in Chandigarh on February 1, 1930, the son of a station master. He was bitten by the journalism bug at a tender age.

A Punjab University graduate, he was barely out of his teens when he entered the Fourth Estate, joining the news agency United Press of India (UPI), precursor to the UNI.

“He brought to the profession a reporter's unerring eye for the telling detail of a story and a columnist's passion for perspective and balance.”

Malhotra then dabbled in Hindi reporting for a while before returning to mainstream English language journalism.

His first major innings as a journalist began with The Statesman, in the mid-1950s, where he worked as a political correspondent under Evan Charlton, one of the last British editors of this great newspaper.

He rose through the ranks and became resident editor of The Statesman in Delhi, in 1964, a position he held till 1971.

Malhotra, an authority on Indian politics, was also a foreign policy expert. He was known for his defence analyses and his Op-Eds on the 1962 India-China war were widely-followed and eagerly-awaited.

With his in-depth coverage of the 1965 Indo-Pak war he established himself as India’s foremost defence correspondent.

“In part, this was based on his close monitoring of the late Homi Bhabha, who was at the time head of India’s Atomic Energy Commission,” wrote veteran journalist Shyam Bhatia in The Indian Express.

“But he was also the first journalist to understand the significance of Prime Minister Lal Bahadur Shastri’s speech to Parliament in 1965, when he claimed India would remain committed to the peaceful uses of nuclear policy but would consider using nuclear explosions for blasting caves and tunnels.”

He migrated to The Times of India and worked with two stalwarts of the newspaper world, Sham Lal and Girilal Jain, before becoming the resident editor himself, in 1978.

However, once he began to suspect that his editorial freedom was being encroached upon, he put in his papers in 1986. He became a freelance writer and columnist.

He took a Nehru Fellowship and worked on Indira Gandhi: A Personal and Political Biography (Hodder and Stoughton, 1989), later revising it as Dynasties of India and Beyond.

He married Rekha, a classical danseuse with the Ram Gopal dance troupe. She died in 1987. Their son, Anil Revri, is a reputed painter, currently based in Washington DC.

For all his greatness and achievements, Malhotra never forgot his humble origins. He was a gem of a person, much admired for his frankness, honesty, modesty and sense of humour.