India Is Moving Forward At A New Pace: PM Modi On Independence Day

In his last Independence Day address ahead of the next Lok Sabha elections, Prime Minister Narendra Modi spoke about the progress India has made under his government and asserted that its rise is being hailed by the world. 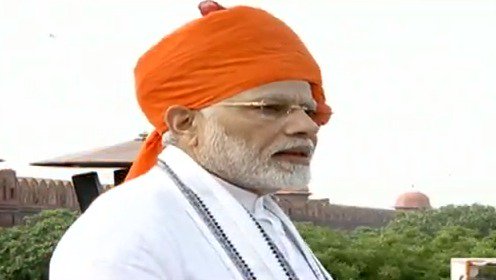 In his last Independence Day address ahead of the next Lok Sabha elections, Prime Minister Narendra Modi on Wednesday spoke at length about the progress India has made under his government and asserted that its rise is being hailed by the world.

Modi drew a comparison between the situation in 2013 and how things stand today and said if the pace of the UPA government's last year was maintained, it would have taken decades, centuries and generations to build as many toilets, distribute as many LPG connections among the poor and lay down as much optical fibre as his government has done.

While the country is brimming with self-confidence today, it is forging ahead with a new sense of commitment, he said.

"India is moving forward at a new pace," he said.

Modi also spoke about the recent Monsoon Session of Parliament and said it was dedicated to social justice, with measures being taken to protect the interests of Dalits, deprived people, tribals, women and the backwards.

The recently concluded monsoon session of Parliament was one devoted to social justice. The Parliament session witnessed the passage of the bill to create an OBC Commission: PM Narendra Modi #IndependenceDayIndia pic.twitter.com/Hp3v9H28hg

"We have to ensure social justice for all and create an India that is progressing rapidly," he said.

Indians today across the globe are feeling proud as the country has become the sixth largest economy in the world, he said.

While decisions have been held back in the past due political and other compulsions, bold decisions like the GST are being taken now, he said.

"The world was worried earlier about India as it saw the country among the fragile five, now it looks at us with hope," he said.

"The world earlier viewed India as a country hit by policy paralysis, delayed reforms, now it sees it as a multi-trillion dollar investment destination," he said, adding that his government also took the bold measure of announcing the minimum support price for grains at 1.5 times the cost to farmers.

He also expressed his sadness at the plight of people in parts of the country affected by floods.