'India Is Too Tame' 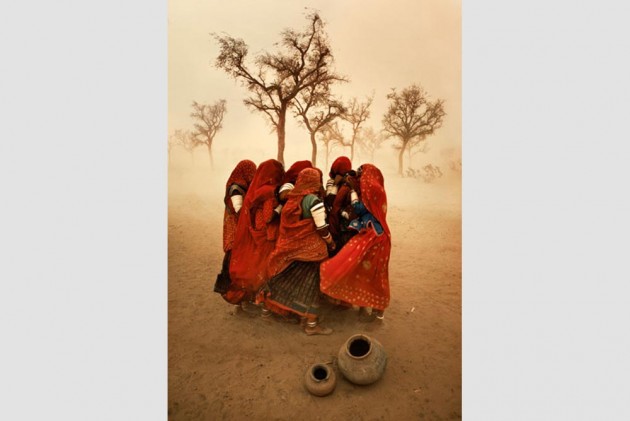 On the penultimate morning of the Zee Jaipur Literature Festival, the sprawling press terrace at Diggi Palace saw an affable man walk in with a slight air of being hounded. Half of the terrace fell silent. In about two minutes Steve McCurry was in conversation with Dipsikha Thakur. McCurry is the world-famous photojournalist best-known for his 1984 photo The Afghan Girl—originally the cover short of an issue of the National Geographic magazine in 1985 and now synonymous with documentary photography. Last December Phaidon/Roli Books launched his latest book India, which takes a long look at trains and railway stations in India. Here McCurry talks about how he became fascinated with the idea of train journeys in India, his “combative” approach to being asked about the Afghan Girl and what it means to be a documentary photographer in the age of Facebook, Instagram and Photoshop.

You have been taking photos for more than three decades now. How drastically would you say things have changed since you started?

Well, for one thing it is now a lot easier to just self-publish. When I started out you had to work with an agency, you had to get magazines to publish your photos. That was the only way to do things. Now, with websites, blogs and Instagram, it has become faster and more efficient.

And how do you feel about that? Many photographers complain that it is so almost too easy. You can take a photo, use a filter on it and upload within a minute. Do you feel it takes something away from the craft?

I don’t see any inherent problem with editing photos. It can be an issue if you are a photojournalist because there if you are, say, at Outlook or the New York Times, because there are clear ethical guidelines about altering pictures. There can be no ambiguity, and that makes a big difference. If you are an art photographer, it doesn’t really matter so much. What I do think is that photographers should announce what they are doing with the alterations. I mean artists have been at this job—of developing and editing photos—for 150 years now. So there is obviously no new, sudden reason for platforms like that to create a problem.

I never use them! [laughs] I mean I know about them—I guess everyone knows about them. Does it matters, really? I think it depends on what sort of purpose they are being used for. If you are doing a news picture, then you cannot use them. I think it also depends on what filter you are using—if you are trying to make something black-and-white, that’s absolutely fine.

So, not filters that are necessarily problematic but how they are used…

Yeah! Okay, so you are Indian, right? Now, what if I make you into a tone so dark that you look like someone out of a village in Sudan--that would be weird, right?

I think I’d be far more worried if I looked too pale, to be honest…

Exactly! If I make you into a ghost, especially if I do that on purpose, that’d be even weirder, right? Which is why journalists cannot really use it. But if you were joking around, doing it for your friend—who cares? But if you use a filter on a photo for the BBC or India Today—that’s a huge problem.

How important are political sensitivities to you as a photographer?

You always have to worry about the social and moral implications of the photographs you are taking—especially in violent, vulnerable landscapes.

I have been accused of that, but I don’t think it’s a problem unless someone is dying in a refugee camp and I am trying to make that look beautiful—trying to make suffering beautiful. But if I take a photo of someone and it just happens to be beautifully lit, that’s not really my problem.

It’s an argument that has been there for a while and people can go round and round with it.

So, the Afghan Girl…can you tell us a bit about how that particular journey has shaped up?

Sure I could! But instead I want to ask you whether it is that you have not done your research—why not just Google it?—or whether you have a more specific question. I always get asked about it because it is easy for the interviewer to hear me narrate the whole thing, but really, shouldn’t it be a little less easy?

Specifically, then, tell us about the rediscovery of Sharbat Gula through the 2005 Nat Geo documentary Finding the Afghan Girl. You took the photograph in 1984. Two decades later you went back and the anonymous face was identified with a name—at a time when she was part of a family and had kids. Was it ethical to expose her to the world like that? After all, she had no idea she was on that photo.

Absolutely! It is our duty—my duty and your duty—to tell the stories of those people who cannot tell it themselves. It is a great privilege that comes with being part of the journalistic community. During invasions, wars and destructions, someone needs to go in and tell the stories. After all, if we all put our feet up and refused to go into unsafe landscapes to find out about these people, then how would their stories get told?

But there is a difference between a story and identifiable names and details. A woman living in a violently patriarchal society like that of rural Afghanistan could be put in danger if conservative powers—like the Taliban--take offence with a woman’s face being exposed to the public gaze. I only ask this because it remains a pertinent question with the photojournalists currently documenting Yazidi survivors of the ISIS and other refugees in precarious situations.

That’s a risk. That’s always a risk. But equally, someone could walk in here, at Diggi Palace right now, and kill me for being not being a Muslim, for being American. As a journalist you cannot let yourself get into that irrational fear that because you told a story, someone might come up and injure or destroy that person. We cannot alter our behavior for crazy people out there. That would be wrong.

But I guess I made a mistake by not taking her name when I took the photo. The problem though is that I do not want people to pose—so it would be very difficult to walk up to someone, ask for their name, contact and consent and then ask for a photo. What I do when I take photos is a kind of dance—a ballet, if you will—and too much communication can sometimes break the rhythm—both for me and the subject.

Tell us about your latest book. You have mentioned your fascination with Indian train journeys before. How did that come about?

I was very ill and taking a break in Kodaikanal and someone gave me a book called the Great Railway Bazaar by Paul Theroux. The book was fascinating and the idea of taking trains and turning that into a story seemed wonderful to me. Trains in India are extremely interesting; not like taking a train in Belgium or Germany where everything is very sanitised, even boring. There were all these stations across India that I thought of—Lucknow, Kanpur, Darjeeling and Howrah, to name just a few—with amazing architecture; all these little, pretty trains which had a lot of motion, all kinds of funny situations; you could see people sleeping, eating and washing. In a way, it was a kind of microcosm of Indian life. And India manages to be endlessly inspiring. There is so much energy, so much spice in this country—no one can ever accuse it of being boring.

I remember this one time, for instance, when I was working with Prashant (Panjiar) for Outlook and we got arrested for trying to get to Bhutan without proper visas. And the whole community sort of rallied and told the policemen that we were serious, bona fide journalists; that putting us in jail for a some visa problem would not be good at all…although, who knows, a couple of nights in the prison might have been interesting [laughs].

An opportunity for many striking photos?

Yes, but I don’t know. India is too tame. Spending some time in a prison in Iran—now that would be the real thing.