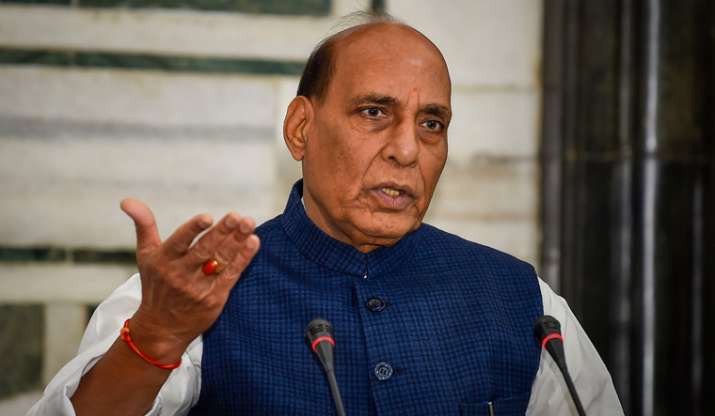 Defence Minister Rajnath Singh said on Saturday that in order to face the probable repercussions of the uncertain and anarchic security scenario of Afghanistan, India must keep its guard up.

In light of the drastically changing regional scenario he emphasized on the fact that there is a need to remain vigilant at all times and also mentioned that developments around the world deeply affects India.

In an address after dedicating an indigenously-built Coast Guard ship here, he also delved into the emerging challenges in the Indian Ocean, a region that has been witnessing increasing rivalry between India and China.

"Changes happening around the world often become a matter of concern for us. We, as a nation, must keep our guards high during these times of uncertainties and upheavals around the world," the defence minister said with elaborating further.

His comments came in the backdrop of increasing concerns in the Indian security establishment over the possibility of terror spillover from Afghanistan into Jammu and Kashmir through Pakistan and rise in terrorist activities, particularly by groups such as Lashkar-e-Taiba and Jaish-e-Mohammed.

Chief of Defence Staff Gen Bipin Rawat on Wednesday said contingency plans are in place to firmly deal with any possible terrorist activity flowing out of Taliban-controlled Afghanistan into India.

"Today the world is changing very rapidly. Economic, political, and trade relations between countries are constantly fluctuating. Nothing can be said about the next news coming from another country," Singh said.

"Obviously, our country can not remain untouched by these developments. This applies all the more to a country like ours, being a country whose interests are directly linked to the Indian Ocean," he said.

The Indian Ocean, a key geostrategic space and considered the backyard of the Indian Navy, is witnessing a rising Chinese military footprint forcing the Indian Navy to expand its presence.
Singh described the Indian Ocean region as a key route not just for India but for the entire world as it is home to more than two-thirds of the oil shipments, one-third of bulk cargo and over half of the container traffic.

"And as I just mentioned, today's changing world certainly impacts these areas as well. As such, we need to be vigilant at all times," he said.

Singh said in view of global security reasons, border disputes, and maritime dominance, countries around the world are moving towards modernising and strengthening their military power.

He said the demand for military equipment is increasing continuously, noting reports suggest that in the next one or two years, the expenditure on security around the world is going to reach USD 2.1 trillion and it is expected to increase manifold in the next five years.

"In such a situation, today we have great scope to make full use of our capabilities, take advantage of policies, and move towards making the country an indigenous shipbuilding hub," he said.

The defence minister also said that the Indian Coast Guard has made its mark at the international level by playing a leading role in coastal security as well as in maritime crises, and disasters.