India needs to cut down on Defence imports, give thrust to R&D, says Vice Prez

Naidu, while inaugurating the 70th anniversary celebrations of the Naval Physical and Oceanographic Laboratory (NPOL) near here, said to achieve "atma-nirbhartha", India needs to allow private collaboration, wherever it is possible, with stringent quality controls. 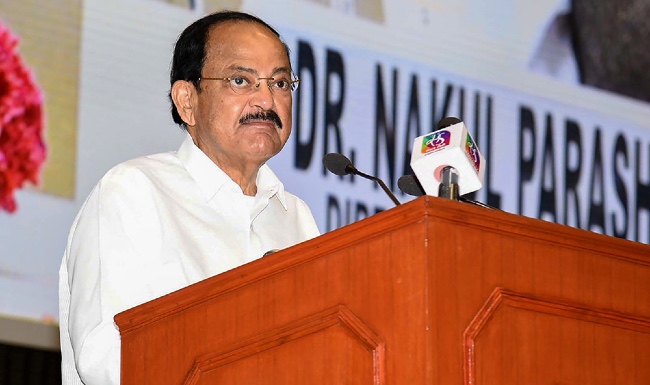 Vice President M Venkaiah Naidu on Sunday stressed that in order to become fully self-reliant in strategic domains, India needs to cut down on Defence imports and give greater thrust to R&D as well as "private collaboration".

"Our mantra should be atma-nirbhartha—to make India fully self-reliant in all areas, including strategic domains. For instance, we need to keep increasing our indigenous content in the Defence sector and cut down on imports. To achieve that, we need to not only give greater thrust to R&D activities, but also allow private collaboration, wherever it is possible and feasible, with stringent quality controls," Naidu said.

The Vice President virtually laid the foundation stone of the "Towed Array Integration Facility", essential for the development of towed array sonar systems, which is critical to underwater defence. The towed array sonar system is expected to enhance the Navy's capabilities to detect quieter enemy submarines underwater. Naidu also inaugurated the Dr. APJ Abdul Kalam memorial at the NPOL premises.

Observing that India was strongly marching ahead on its way to becoming a global superpower in the coming decades, Naidu said our scientists from DRDO, ISRO, BARC and other leading R&D organizations were doing excellent work in strengthening the country’s security in Defence, Space and other areas.

"But it is also a fact that our country is still one of the largest importers of defence equipment. In this context, the contribution of a small lab like NPOL in empowering the nation in its defence needs is truly commendable," he noted. Naidu hailed the country's scientists and said they were working very closely with the Indian Navy personnel, frequently sailing with them in ships and submarines in order to gain a deeper insight into their requirements and offer customized solutions.

Keeping in view the geo-political scenario in our neighbourhood, the Vice President said NPOL's role towards national security is paramount as all warships or conventional submarines in the fleet of the Indian Navy are equipped with NPOL-developed sonars. Formed in the Southern Naval Command in 1952, NPOL later became part of DRDO in 1958. It will be celebrating its 70th year of inception in 2022.

Earlier in the day, Naidu visited the Indigenous Aircraft Carrier (IAC) Vikrant being constructed at Cochin Shipyard Limited (CSL) here. Chairman and Managing Director of the CSL, Madhu S Nair, briefed him about the yard's capabilities and strengths and its contributions in developing indigenous technologies and creating world class capabilities.

He will attend a few programmes in Kochi and Kottayam on Monday and will fly back to New Delhi on January 3. Naidu, who reached Kerala on December 31, flew to Lakshadweep on the same day. He attended various programmes in the island over the last two days.