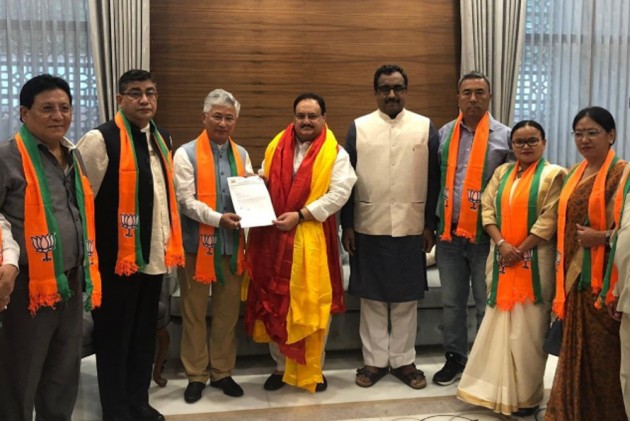 As many as 10 MLAs of the Sikkim Democratic Front joined the BJP on Tuesday, propelling the saffron party to the status of the main opposition in a state where it had not won a single seat in the recent assembly polls.

The MLAs met BJP working president J P Nadda and joined the party in the presence of its general secretary Ram Madhav, who is in-charge of the party's affairs in the north east.

Madhav told reporters that the SDF had a strength of 13 MLAs and its legislature party decided to merge with the BJP. Two-thirds or more numbers of the MLAs of a party can join a new party without violating the anti-defection law.

The BJP will play the role of a constructive opposition in the state, Madhav said.

The BJP is running government as the main party or in alliance with regional parties in all the northeastern states except Sikkim and this development has pushed the party closer to power there as well.

The SDF, headed by Pawan Kumar Chamling, ruled the state for over 25 years, making him the longest-serving chief minister of the country but he lost power in the recent elections.

The party won 15 seats while its rival Sikkim Krantikari Morcha won 17 in the 32-member assembly. Since two of the SDF MLAs had won from two seats, they resigned from one seat each, reducing the party's strength to 13 in the assembly.

The MLAs who joined the BJP include Dorjee Tshering Lepcha, who served as a minister in the Chamling government for three times and is a five-term MLA, and three-term MLA Ugen Gyatso.

Lepcha said they were impressed with the "look east" of the Narendra Modi government, as he highlighted that his state is bounded by China, Bhutam and Nepal.

This is the first time that MLAs of a regional party in Sikkim have joined a national party "en bloc", he said.

"We want lotus to bloom in Sikkim," he said, referring to the BJP's election symbol.

As per a report of ANI news agency, the entire legislative party of Sikkim Democratic Front, except Chamling, may join the Bharatiya Janata Party later Tuesday. Chamling, the president of SDF, had founded the regional party in 1993.

The BJP's immediate challenge in the state will be the byelections to three seats.