The girl had been pleading for help since 2 am last night. "Mujhe bahar nikalo," had been her repeated plea, a rescue worker told PTI. 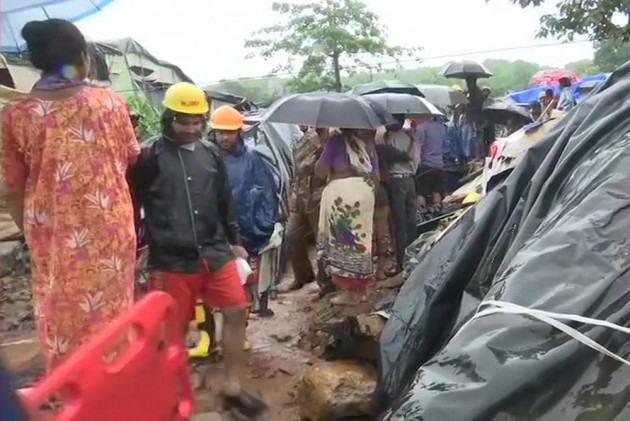 The 15-year-old girl who was trapped in the debris after a wall collapse was brought out dead after being stuck there for over 12 hours.

The heavy rains, which had brought down a wall in Mumbai's Malad area, have already left close to 20 people dead and another 50 injured.

Efforts to pull the girl, Sanchita Nalawade, out of the debris in one of the most congested areas in the city proved to be futile for she could not be pulled out alive.

The girl had been pleading for help since 2 am last night. "Mujhe bahar nikalo," had been her repeated plea, PTI quoted a rescue worker as saying.

Her faint voice was also heard asking for water, he added.

"Her legs were stuck in the debris, so it took long to rescue her. We tried our best to bring her up alive but could not," said a doctor present on the spot.

The medical team tried their best to revive her, but could not, he added.

"Water started accumulating from the moment it began to rain heavily several hours ago. It created massive pressure on the wall. As a result, it soon collapsed," PTI quoted a resident as saying.

An eyewitness said the collapse felt like a Tsunami accompanied by a massive thud.

Residents, whose shanties got damaged in the wall collapse, have demanded adequate compensation from the authorities.

Maharashtra Chief Minister Devendra Fadnavis had, earlier in the day, announced Rs 5 lakh to the kin of the deceased.