The speeding bus hit the loader, which fell on the other side of the highway, while the bus also overturned and fell into a ditch. 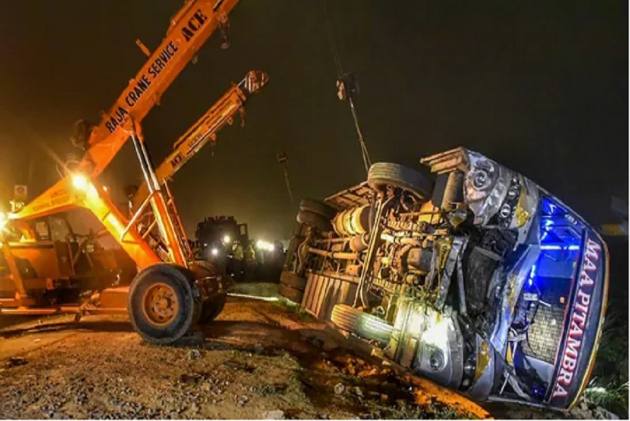 At least 16 people were killed and six injured after a speeding bus hit a loader on the Kanpur-Allahabad highway in the Sachendi area of Kanpur district in Uttar Pradesh late on Tuesday evening.

The police said that two among the injured are critical.

The accident occurred in the Kisan Nagar area when a speeding bus hit a loader, which fell on the other side of the highway, while the bus also overturned and fell into a ditch, Kanpur Outer's Superintendent of Police (SP) Ashtbhuja Prasad Singh said.

Chief Minister Yogi Adityanath has announced an ex-gratia amount of Rs 2 lakh each to the next of kin of the deceased and ordered an inquiry into the incident.

The collision was so strong that almost all passengers of both the vehicles got trapped and some of them died on the spot, the SP said.

GSVM college principal RB Kamal told PTI over the phone that at least 16 people were killed, while five were admitted at the Lala Lajpat Rai (LLR) hospital with serious injuries.

The condition of two was said to be very critical, he said.

A heavy police force, comprising personnel from half-a-dozen police stations, was dispatched to the site of the accident.

The policemen extricated the passengers and found that many of them were already dead.

Prime Minister Narendra Modi  expressed grief at the loss of lives in a road accident in Kanpur and announced an ex-gratia of Rs 2 lakh each from the Prime Minister's National Relief Fund for the next of kin the deceased.

The Prime Minister's Office (PMO) said Rs 50,000 each would be provided to those injured in the accident.

Modi expressed his condolences to the families of the deceased and wished a speedy recovery to the injured.

An official spokesperson in Lucknow said the chief minister has expressed grief over the loss of lives in the road accident in Kanpur and directed senior officials to immediately rush to the spot.

He has announced an ex-gratia amount of Rs 2 lakh each to the kin of the deceased, and asked the district administration to conduct an inquiry into the reasons behind the accident and submit a report, the spokesperson said.

The chief minister has also directed for extending immediate help and ensuring proper treatment to the injured persons.