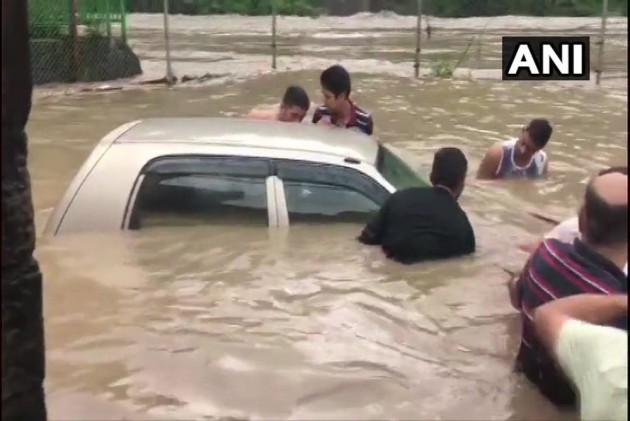 At least 22 people, including two Nepalese, were killed and nine others injured in rain-related incidents in Himachal Pradesh on Sunday, officials said.

The district officials have issued a one-page order directing all educational institutions, ITIs, polytechnics, and Anganwadi centers in Shimla to remain shut on Monday.

IMD has predicted heavy rain at different places in the state.

Precipitation occurred at most places in the state with very heavy rainfall in Kangra and Chamba districts in the past 24 hours, an official of the meteorological office here said.

Areas such as Chamba, Shimla, Dharamsala, Solan and Nahan are likely to receive light rains accompanied by a thunderstorm for the next few days.

Train services between Shimla-Kalka were disrupted on Sunday after multiple landslides blocked the rail route in Himachal Pradesh, a rail official said.

A Shimla-bound train from Kalka had started at 3 am but had to be terminated midway at Dharampur Railway Station at 5 am due to landslides, he added.

Subsequently, it was decided not to run any train till the clearance of the track, he added.

A landslide hit a spot near the RTO office in Shimla,  leaving three persons dead. One person is still trapped under the debris, police said. In another incident, a man was killed after a landslide hit the national highway near Hatkoti Kenchi in Shimla's Rohru subdivision.

The landslide disturbed the road traffic and caused a heavy traffic jam on NH-5 and NH3.

NH-5 was blocked for few hours near Ribba of Kinnaur district. While, NH-3 between Manali and Kullu was partially damaged due to the landslide.

The Mandi-Kullu national highway in Himachal Pradesh was closed for vehicles subsequently, a district official said on Sunday.

The road was closed for vehicles as the water in the Beas river rose to a dangerous level, he added.

Traffic was also hampered on 68 roads across the state and the maximum 47 blockades were in Chamba district, a government spokesperson told IANS here. The Mandi-Jogindernagar highway was closed for traffic.

There were also reports of link road closure in interiors of Shimla, Sirmaur, Mandi, Kangra, and Kullu districts, hampering the movement of traffic.

Also, the portion of the road in Balichowki area of Mandi district was damaged due to continuous rainfall in the area.

A Balley bridge near Kullu town was washed away due to flashflood.

In other rain-related incidents, a laborer was killed as the wall of a house collapsed here following heavy rains early Sunday, the police said.

The deceased has been identified as Shah Alam, who hailed from Bihar's Kishanganj district.

In Kullu, a man was washed away in Sajwar Nullah when locals were trying to rescue him. The deceased has been identified as Chooni Lal.

In Chamba district, two persons are trapped in the rubble after a house collapsed following heavy rains. The house collapsed in Lona Gram Panchayat at 3:30 am, trapping a 70-year-old and a 7-year-old.

In Narkand area of Shimla district, 2 Nepalese died and three were injured after when a tree fell on their house