The 73-year-old former Congress leader was sentenced to life for the "remainder of his natural life" by the Delhi High Court on December 17. 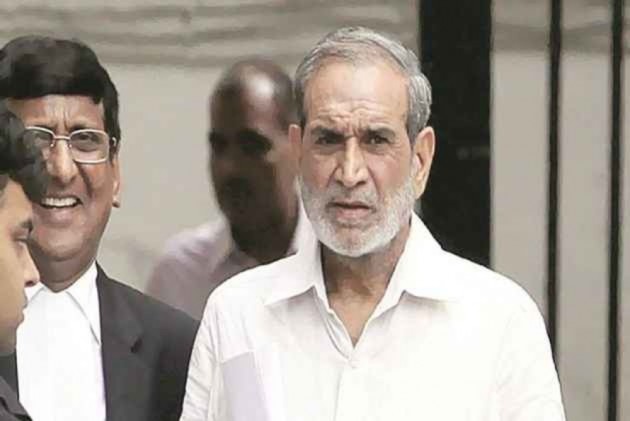 Former Congress leader Sajjan Kumar on Monday surrendered before a court here amid tight security to serve the life sentence awarded to him by the Delhi High Court in a 1984 anti-Sikh riots case.

Kumar, 73, was sent to Mandoli jail in northeast Delhi by Metropolitan Magistrate Aditi Garg, who directed that he be provided a separate van for commuting due to "security threat".

Clad in a black coat and trousers, a cream coloured muffler and a blue cap, Sajjan Kumar was flanked by his lawyers and surrounded by scores of security personnel as he arrived at Karkardooma court at 2.15 pm on Monday, the deadline for surrendering set by the High Court which had on December 21 declined his plea to extend the time by a month.

Outside the court complex, a group of Sikhs gathered raising slogans and showing the victory sign after Kumar surrendered. Media persons were not allowed inside the court room by the judge and security officials .

The trial court declined the plea of Kumar's lawyer that he be sent to high-security Tihar Jail as the case pertains to Delhi Cantonment area which comes under Tihar Jail's jurisdiction.

The court was informed by jail authorities that from Karkardooma court, all convicts are first taken to Mandoli jail and from there, the authorities may shift them to another jail, if they deem it appropriate.

"The convict is taken into custody and be sent to jail as per rules. Since, there is security threat to the convict, he be provided a separate van for commuting from court to jail and from jail to court," the magistrate said in the two-page order.

Kumar came to the courtroom surrounded by 2-3 commandos along with 20-25 Delhi Police personnel, including women, said one of the police officers.

He was flanked by his confidant Kailash and 4-5 advocates. No family member or Congress leader accompanied him.

The court was informed by Kumar's counsel that the fine imposed by the high court is yet to be deposited.

Earlier in the day, former MLAs Krishan Khokhar and Mahender Yadav, who were also convicted in the same case, surrendered before the court to serve their 10-year jail term. They were accompanied by family members and relatives.

The court allowed Yadav to take spectacles and walking stick to jail.

They both were sentenced to three years jail by the trial court for the offence of rioting and armed with deadly weapon, but the high court enhanced their jail term by convicting them for criminal conspiracy, mischief by fire or explosive substance with intent to destroy house, promoting enmity between different groups on ground of religion and injuring a place of worship to insult the religion.

The counsel for Yadav and Krishan told the court that they have deposited the fine imposed on them by the trial court in its May 9, 2013 order and they are yet to deposit the fine imposed by the high court.

Kumar, a former Member of Parliament, has already filed an appeal in the Supreme Court challenging the conviction and life sentence awarded to him by the high court. There is also another anti-Sikh riots case pending against him.

The high court on December 17 convicted and sentenced Kumar to life imprisonment for the "remainder of his natural life". After his conviction, Kumar resigned from the Congress party.

The case in which Kumar was convicted and sentenced relates to the killing of five Sikhs in Delhi Cantonment's Raj Nagar Part-I area of southwest Delhi on November 1-2, 1984 and burning down of a Gurudwara in Raj Nagar Part-II.

The riots had broken out after the assassination of then prime minister Indira Gandhi on October 31, 1984, by her two Sikh bodyguards.

Besides Kumar, Yadav and Krishan, the others convicted in the case were former Congress councillor Balwan Khokhar, retired naval officer Captain Bhagmal and Girdhari Lal.

In its judgment, the high court had noted that over 2,700 Sikhs were killed in the national capital during the 1984 riots which was indeed a "carnage of unbelievable proportions".

It also said the riots were a "crime against humanity" perpetrated by those who enjoyed "political patronage" and aided by an "indifferent" law enforcement agency.

The high court had further said there has been a familiar pattern of mass killings since Partition, like in Mumbai in 1993, Gujarat in 2002 and Muzaffarnagar, Uttar Pradesh in 2013, and the "common" feature of each was the "targeting of minorities" with the attacks being "spearheaded by the dominant political actors, facilitated by law enforcement agencies".

The high court had set aside the trial court's 2010 verdict which had acquitted Kumar in the case.