The killing of 14 civilians by security forces in Mon district brought a disconsolate 2021 to a close for Nagaland, with the shared aspiration of its people for an early solution to the decades-old political issue remaining a distant dream. 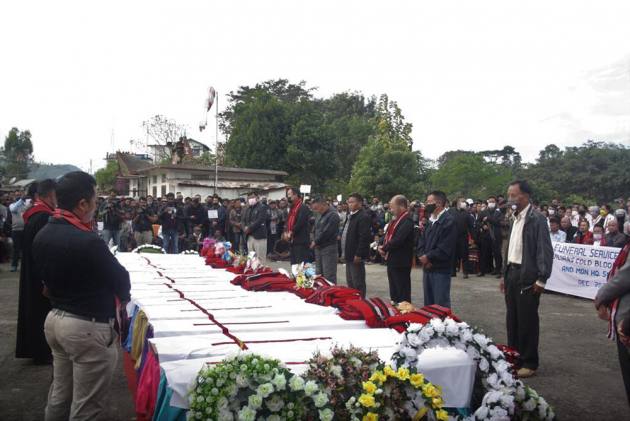 Fourteen civilians, including six daily wagers working at a coal mine, were shot dead in a series of firings by security forces in Mon district over December 4-5 in a botched anti-militancy operation, triggering a nationwide outrage and reigniting the demand for withdrawal of the Armed Forces (Special Powers) Act (AFSPA), 1958 from the Northeastern state.

Even as political leaders of the region, including Chief Minister Neiphiu Rio, pushed for repeal of the controversial law, the Centre declared the entire state of Nagaland a "disturbed area" for six more months with effect from December 30 under the AFSPA while terming the state's condition "dangerous".

The state assembly also held a special session on December 21, when it passed a resolution demanding withdrawal of AFSPA from the state and the Northeast, besides an apology for the killings in Oting village in Mon.

Kashmir | Abrogation Of Article 370 In The Valley, A Memoir

The move drew flak from the Congress and the newly-formed Rising People's Party as they demanded justice and not mere apology.

In solidarity with Konyak Nagas, the tribe to which the victims belonged, the state government called off the signature Hornbill Festival, which was being held after two years due to the pandemic. Diplomats from a number of countries were attending the festival when it was called off amid rising tension.

The issue of resolution of the Naga political issue hit a bump during the year with the National Socialist Council of Nagaland Isak-Muivah (NSCN-IM) refusing to hold talks with the then Centre-appointed interlocutor and state governor R N Ravi, claiming it did not trust him. Ravi was shifted to Tamil Nadu as governor on September 9.

The talks resumed on September 20 in Dimapur with the appointment of former Intelligence Bureau special director AK Mishra as the new interlocutor.

The dialogue subsequently moved to New Delhi but the insistence of the NSCN(IM), which had signed the Framework Agreement in August 2015, on a separate flag and constitution blocked a final solution as the Centre held on to its position of not conceding those demands.

On the other hand, the parallel talks with the Working Committee of Naga National Political Groups (NPPGs), which is willing to go ahead and reach a final agreement, could also not make much headway.

To facilitate resolution of the Naga issue and put forth a united voice before the Centre, principal opposition Naga People's Front (NPF), having 25 MLAs, proposed joining the government, which was accepted by the ruling People's Democratic Alliance (PDA).

This led to the formation of the United Democratic Alliance (UDA) government, leaving no significant opposition in the state.

Asserting that resolving the Naga political issue tops its agenda, the state government in June constituted a committee of 60 legislators and two MPs to iron out the differences between the negotiating parties.

The assembly also adopted a four-point resolution on the vexed political question in February, with the 60-member House resolving to work unitedly to facilitate meaningful negotiations.

However, unanimity proved elusive as the Congress urged all the 60 MLAs to resign to demonstrate their sincerity and pressure the Centre for a solution to the decades-old problem.

The year also witnessed a split in the NSCN (Reformation) with Akato Chophy becoming its new president. At present, there are at least 13 Naga underground groups in the state.

Factional tussle within the state BJP continued for the second year with presidents of six district units demanding the removal of the party's Nagaland president Temjen Imna Along, but that did not find favour with the central leadership.

The Nationalist Democratic Progressive Party (NDPP), a major constituent of the ruling coalition, won the bypolls to Noksen and Shamator-Chessore uncontested, raising its tally in the state assembly to 21.

Tension also prevailed along the interstate boundary with Assam. However, defusing the situation, Assam and Nagaland signed an agreement on July 31 to maintain peace in areas around Ao Senden and Vikuto villages.

The second wave of the coronavirus pandemic hit the state in April-May, forcing the government to impose strict restrictions.

Nagaland witnessed a drought-like situation this year with the delay in the arrival of monsoon and erratic rainfall.

According to Nagaland State Disaster Management Authority (NSDMA) data, the districts recorded rainfall deficiency of 20-59 per cent, except for Mon which received 40 per cent excess rainfall.

The Nagaland government launched the Vision 2030 document in August, along with the District Sustainable Development Goals (SDG) Localisation and Integration Manual, aiming for a well-governed, peaceful, inclusive and prosperous state with a sustainable and diverse economy, a skilled and healthy population, providing equitable opportunities for all citizens.