An intensified political rivalry between the ruling TRS and BJP that virtually manifested in the "paddy wars" between the state government and the Centre. 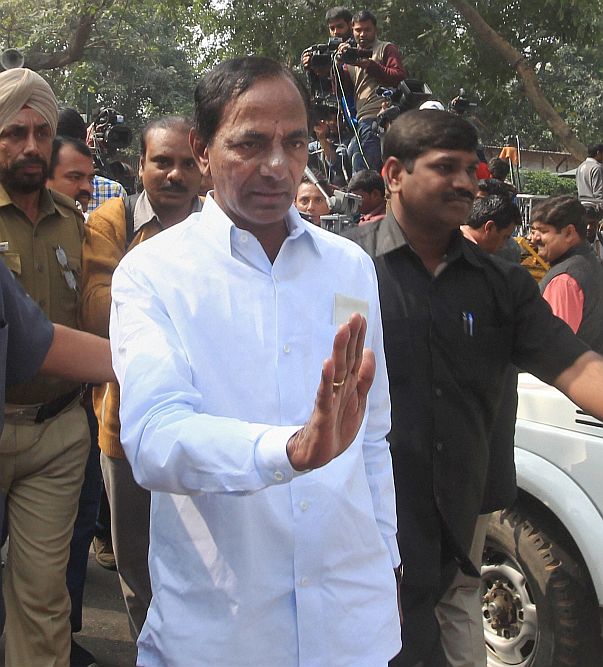 The saffron party delivering yet another electoral surprise and the covid peak in April turned out to be the significant events in 2021 for Telangana.

Paddy procurement emerged as a contentious issue between the TRS government and the BJP that saw repeated war of words between the two camps marked by some acrimonius exchange.

The BJP, which now aspires to form government in Telangana, the second southern state after Karnataka in 2023, followed up its 2020 electoral surprises in Greater Hyderabad Municipal Corporation (GHMC) and Dubbak assembly bypolls with the Huzurabad byelections in 2021, with Etala Rajendar, who was removed from the state cabinet over allegations of land grabbing, emerging victorious in the hustings.

Rajender, who had dismissed the allegations against him, retained the seat overcoming a formidable challenge from the Telangana Rashtra Samiti (TRS).

TRS, however tasted sweet success in the MLC polls and bypoll to Nagarjuna Sagar assembly segment, asserting its supremacy. However, its loss to former partyman at Huzurabad is seen as a setback.

Subsequenty, the rivals sparred over a number of issues, the paddy procurement among them taking the cake.

TRS supremo and Chief Minister K Chandrasekhar Rao held a dharna in November along with his ministers, MLAs and others on the paddy procurement issue. He protested against the NDA government's alleged unhelpful stance over paddy procurement.

The TRS government had demanded that the Centre convey the annual target for paddy procurement from Telangana.

BJP leaders, meanwhile, said the Centre would procure paddy from Telangana as per the agreements between the state government and the Food Corporation of India (FCI) and that the state government had given a written commitment that it will not deliver parboiled rice to the FCI in future.

Stepping up its attack on the BJP and the NDA government at the Centre, TRS again in December held protests against the NDA government's alleged anti-farmer policies, including paddy procurement. Party MPs, who protested over the issue inside the House during the winter session of the Parliament, had later boycotted the remainder of the session.

BJP leader and Union Minister G Kishan Reddy accused the CM of raking up the paddy procurement issue in order to divert the people's attention from the defeat of TRS in the Huzurabad assembly seat bypoll.

The rivalry reached a crescendo when Rao said he would cut the tongues of the BJP leaders if they didn't refrain from allegedly using bad language to criticise him.

"TRS is the largest party with the highest number of representatives in the state. So far we have tolerated your comments as dog barking. Henceforth if you indulge in loose talk, utter nonsensical words we will take legal action against you and question you on roads. If you continue to talk nonsense we will slice your tongues, be careful," Rao warned.

On the administration front, the TRS government launched its flagship Dalit empowerment scheme 'Dalit Bandhu' on a pilot basis and was described by some as the biggest ever DBT scheme in the country, where each beneficiary family would get Rs 10 lakh under the scheme.

The Congress had a forgetful 2021 as it put up a dismal performance in the Huzurabad bypoll. Newly-appointed PCC president and MP A Revanth Reddy is faced with the tough task of resurrecting the party in the face of stiff challenge from the TRS and BJP, even as it it is seen as a divided house.

Heavy rains lashed different parts of the state, leading to a waterlogging in the city and elsewhere.

Away from the world of politics, Telangana was hit hard by the deadly second wave of covid-19 from April to about June. The state's caseload is, however, less compared to some of the others in the country. Telangana has achieved 99 per cent coverage in administering the first dose of vaccination and 61 per cent in the second dose by December 22.

In the world of sports, Hyderabad-based shuttlers P V Sindhu and Kidambi Srikanth brought laurels to the country during 2021. Sindhu, who had won silver in the Rio Olympics earlier, secured bronze in the Tokyo Olympics becoming the first Indian woman to claim medals in two Olympic games. Srikanth bagged the silver medal in the BWF World Championships in December.