Change of guard that saw BJP’s seasoned oarsman in south of India, B S Yediyurappa, finally relenting and making way for Basavaraj Bommai as the Chief Minister and scenes of ambulances with dead bodies of covid-19 victims waiting in front of crematoriums during the second wave of the pandemic. 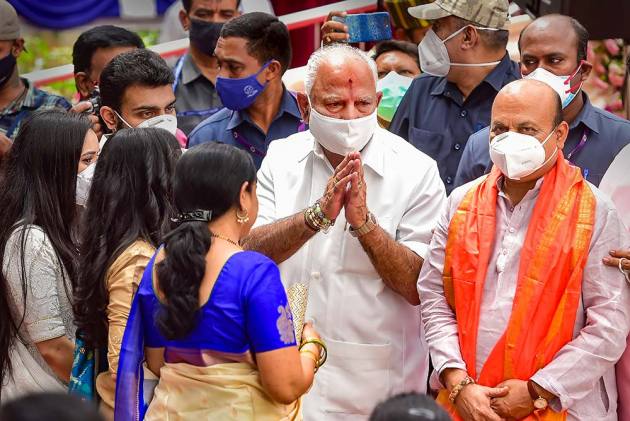 2021 was truly an eventful year for Karnataka.

The ruling BJP managed to pass a contentious anti-conversion bill in the state Assembly in December amid stiff resistance from Opposition but is yet to have its way in the Legislative Council where it lacks majority.

The year saw the state being battered by torrential downpour, for the fourth year in a row, the covid surge in May, the emergence of India's first set of Omicron cases of coronavirus and inter-state disputes with Maharashtra and Tamil Nadu over different issues.

For Yeddiyurappa, the BJP’s "comeback man" in Karnataka, there however seems to be no "closure". He stepped down from the post on July 26, coinciding with his government completing two years in office.

It is also too early to write a political obituary of the 78-year-old Lingayat strongman who has been the face of the party in the state for decades but could never complete a full term in office despite becoming the chief minister four times, as he continues to enjoy clout. That he ensured his loyalist Bommai succeeded him in the BJP's southern citadel on July 28 is a testimony that Yeddiyurappa continues to hold sway.

For the architect of the BJP's first ever government to the south of Vindhyas, age was seen as a primary factor for his exit from the top job, with an unwritten rule in the saffron paty of keeping out those above 75 years from elective offices; also the high-command wanted to make way for new leadership, ahead of the assembly polls, likely by mid-2023, according to some analysts.

According to BJP sources, rumblings within the party with complaints about his "authoritative" style of functioning, his younger son and state vice president B Y Vijayendra’s alleged interference in the administration and allegations of corruption, may also have contributed to his exit.

Even as Bommai is trying to navigate the choppy waters of politics and making efforts to manage "natives" and "migrants" factions of the party, speculation surrounding his possible exit by early next year has rocked the ruling party, despite Union Home Minister Amit Shah announcing that the CM would lead the BJP in the 2023 polls.

Though BJP leadership and Bommai himself have rejected such speculations, rumours regarding his possible exit refuse to die down, citing his knee ailment, and also certain allegations of irregularities like the bitcoin scam and 40 per cent commission charge by government contractors.

BJP losing Hangal assembly segment, which is Bommai's neighbouring constituency and a not-so-great performance in the recent MLC polls under his leadership seem to have added to his worries.

Congress too was in the news as political one upmanship between its top two faces- Leader of Opposition Siddaramaiah and state President D K Shivakumar- overshadow developments in the party, with MLAs and supporters of both openly projecting their leaders as the party's CM face.

With the next assembly polls seen as crucial for the party's future, JD(S) started preparations this year by holding a series of training sessions for workers aimed at independently coming to power in the assembly polls, by winning a minimum of 123 seats, even as several of its leaders are looking at jumping the ship.

On the pandemic front, Covid-19 continued to haunt the state this year too, with daily infections and death peaking to over 50,000 cases and nearly 350 fatalities in May, which resulted in the government imposing strict curbs including lockdown in the state.

With infections peaking, the system's preparations to tackle the pandemic were put to test as shortage of beds in hospitals and ICUs affected the treatment of critically ill patients. In a shocking incident 24 Covid patients allegedly died due to Oxygen shortage in May, in Chamarajanagara district.

Heart-wrenching scenes were witnessed during the months of April-May, as ambulances carrying dead bodies of covid vicitims were seen waiting outside overburdened crematoriums in the city. This had forced the government to set up open crematoriums.

In the fag end of the year, the country's first two Omicron cases were detected in Karnataka on December 2, one of them being a local and the other an international traveller from South Africa. Recently there has been a steady increase in the number of covid-19 clusters in the state as well as Omicron infections, forcing the government to impose "night curfew" for 10 days from December 28 and to ban all New Year parties and gatherings in public places.

After the anti-cow slaughter legislation last year, the government passed the Protection of Right to Freedom of Religion Bill, 2021, in the Assembly, prohibiting unlawful religious conversion by misrepresentation, force, undue influence, coercion, allurement or by any fraudulent means and has penal provisions.

While the government cleared the Assembly hurdle amid stiff resistance from the Congress and JD (S), the fate of the legislation now hangs in balance since it has to pass the Council test where the ruling dispensation does not enjoy majority.

For the fourth consecutive year since 2018, most parts of Karnataka were affected by flooding and landslides, due to torrential rains, causing damage to life and property. According to the government, at least 42 people died in floods and rain in October and November, and crop losses have been estimated at 9.90 lakh hectares.

The overall estimated damage is said to be at Rs 11,916.30 crore, while the state has sought Rs 1,281 crore as relief from the centre, as per norms, for the damage caused.

Certain incidents during the year such as e-commerce giant Amazon selling bikinis having colours of the Karnataka flag and emblem on its Canada site, tech giant Google's search result showing Kannada as India's "ugliest language", and alleged "imposition of Hindi" by the Centre, created a widespread social media outrage in the state and saw resurgence of regional pride in some way.

There were disputes with neighbouring states like Tamil Nadu regarding the implementation of Mekedatu project over Cauvery river, and with Maharashtra on the border issue following recent incidents of defacing of statues of national icons Shivaji Maharaj and Sangolli Rayanna in Bengaluru and Belagavi and burning of Kannada flag in Kolhapur.
The gang-rape of a college girl by six men near Chamundi Hills in Mysuru sent shock waves across the state.

Kannada cinema's reigning star, Puneeth Rajkumar, died in October at the age of 46, leaving his fans shell-shocked and the state mourning.