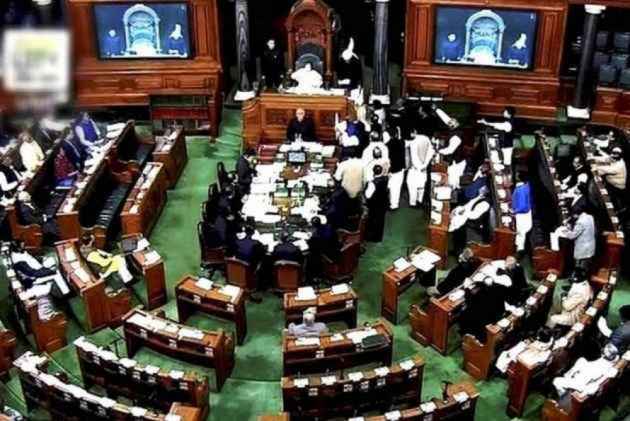 The government on Monday managed to pass three bills in Lok Sabha amid protests by Opposition over Pegasus snooping row.

Some members from Opposition surprisingly withdrew their protests, who have been continuously protesting since the beginning of the Parliament’s Monsoon session.

On Monday, some members who had been protesting against the government throughout the Monsoon session, returned to their seats when the Constitution (One Hundred and Twenty-Seventh Amendment) Bill, 2021 to restore the states' right to identify Other Backward Classes was introduced.

Members of the Congress, DMK and the BSP among others supported the bill even as they slammed the government over the manner in which it has pushed forth its legislative agenda amid disruptions and ruckus.

The House should be in order during the passage of a constitutional amendment bill as it requires mandatory division of votes, and no party will like to be seen opposing a bill that seeks to protect the interests of the OBCs.

However, all other bills were introduced and passed amid noisy protests from opposition members.

RSP's NK Premachandran said the three bills were passed in 10 minutes and likened it to "cooking dosas".

Congress leaders Adhir Ranjan Chowdhury and Manish Tewari alleged that democratic and constitutional norms were being "violated" with the government pushing ahead with its legislative agenda when the House was not in order.

Some of their comments were later expunged by the Chair.

When the third bill, The Constitution (One Hundred and Twenty-Seventh Amendment) Bill, 2021 to restore the states' right to list OBCs, was to be introduced, opposition members vacated the Well of the House and went back to their seats.

When the House met for the day in the morning, Opposition members sought to raise various issues, including the Pegasus spyware controversy and started shouting slogans following which the proceedings were adjourned till 11.30 AM

When the Question Hour resumed at 11.30 AM, Opposition members trooped into Well.

Rajendra Agrawal, who was in the Chair, asked members to go back to their seats.

"Question Hour is a medium to discuss issues, please participate in this," Agrawal said.

Soon, he adjourned the House till noon as the opposition ignored his plea and continued their protests.

When the House met again at noon, Agarwal, who was in the chair, allowed papers related to different ministries to be tabled in the House.

The other bill seeks to repeal the Indian Medicine Central Council Act, 1970 and help make available the Indian system of medicine professionals across the country.

However, Sonowal defended the bills saying these were very important for the country.

Tewari said the introduction of bills amidst opposition protests is a violation of the Constitution.

After the admission of the two bills moved by Sonowal, Agarwal allowed Social Justice and Empowerment minister Virendra Kumar to introduce The Constitution (One Hundred and Twenty-Seventh Amendment) Bill, 2021.

The bill seeks to give power to states and UTs to make their own OBC lists.

Chowdhury strongly opposed the move and said that the entire opposition has been demanding discussion on the alleged snooping by Pegasus spyware but the government was ignoring the demand.

Union Minister of State for Parliamentary Affairs Arjun Meghwal strongly objected to it, saying the government was ready for discussion on all issues.

As protests continued, Agarwal adjourned the House till 12.30 PM.

Both the bills were earlier passed by Rajya Sabha.

The House also passed The Constitution (Scheduled Tribes) Order (Amendment) Bill 2021, which seeks to amend the list of Scheduled Tribes in Arunachal Pradesh, after a brief discussion amidst opposition protests.

Chowdhury said today is World Tribal Day and his party wanted to participate in the debate on the bill but alleged that the government has been "trying to suppress the voices of opposition through its brute majority" in the lower house.

He claimed that the people of the country have been protesting against the policies of the government and it was scared of the people.

"This government is arrogant and vindictive," Chowdhury alleged.

Meghwal said Chowdhury's allegations were baseless as the Modi government is committed to the welfare of the tribals.

Parliamentary Affairs Minister Pralhad Joshi also countered the opposition allegations and said the Modi government wants constructive, long and fruitful debate but the opposition was not allowing the House to function properly.

Soon, the chair adjourned the House till 2 PM.

As the House reconvened at 2 PM, members again trooped in the Well and continued with their protest.

Rama Devi, who was in the Chair, asked the members to go back to their seats so that discussion on COVID-19 could take place, However, the members were unwilling to relent. She later adjourned the proceedings for the day.

Earlier, Speaker Om Birla, on behalf of the House, paid tributes to those who had participated in the Quit India Movement. The members also stood in silence briefly as a mark of respect to those who took part in that movement.

The country is celebrating the 79th anniversary of the Quit India Movement that was launched in 1942 under the leadership of Mahatma Gandhi.

Birla also mentioned India's performance at the just-concluded Olympic games in Tokyo and congratulated the medal winners. Members thumped their desks when the name of Neeraj Chopra, who won the gold medal in the javelin throw at the Olympics, was mentioned.

While noting that winning seven medals was the best Olympics performance by India, Birla exuded confidence that it would encourage youngsters to take up sports. (With PTI inputs)