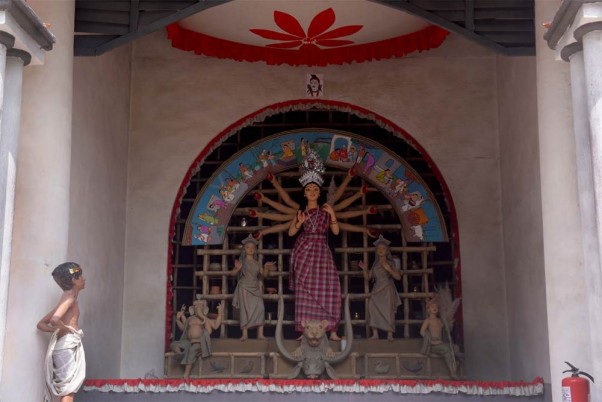 Three neighbourhood Durga Puja committees in the city have joined hands to pay tribute to Satyajit Ray having themed their celebrations on the auteur's Apu trilogy.

While Badamtala Asar Sangha, one of the popular pujas in the city, themed their celebrations on the Pather Panchali, two other neighbourhood clubs located within a distance of 1km, completed the cycle with the sequels - Aparajito and Apur Sansar.

A spokesman for Badamtala told PTI on Friday, once one entered the Nepal Bhattacharya Street a dilapidated old house will be seen on the right side where the deity will resemble the deceased sister of the pivotal child character of Apu in Pather Panchali.

Apu will be seen telling his sister to come back and join the festivities together as "father has promised to buy us new clothes and we will together go out to see idols."

"Our Durga is the girl next door and we had consciously made her face similar to the one in Ray's epochal movie, whose name is also Durga," he said.

As one leaves behind the Badamtala pandal area, certain scenes of Aparajito, the sequel in Apu trilogy, come alive in 66 Pally Puja, located next.

"From Apu's father Harihar starting a new life at Dasaswamedh Ghat in Benaras after daughter Durga's death to the widowhood of his mother Sarbojaya and Apu's growing up phase has been conceptualised in our pandal and idol," a puja organiser said.

Sarbojaya as widow draped in white robes is seen sitting on the side of the goddess which also resembles her face.

At Nepal Bhattacharya Street Sarbojonin Durga Puja, the last in the series, the pandal has a replica of a giant projector at the gate while the marquee features images of Apur Sansar, the third trilogy film.

"Considering the pandemic situation and certain COVID-19 guidelines we have ensured drive-in darshan where revellers need not get down from cars while entering the one way street and see the three pujas one by one and all integrated by a single concept," the spokesman said.

One can also watch the pandals on foot walking along the stretch.

At Aurobindo Setu Durga Puja, the stills of Ray films from Goopy Gyne Bagha Byne to Apu trilogy, Charulata, Aranyer Din Ratri, Ganashatru have been put up in the pathway to the pandal as a tribute to the lifetime Oscar winner.