After the leak, people complained of burning sensation in their eyes and experienced difficulty in breathing. They were immediately rushed to the hospital. 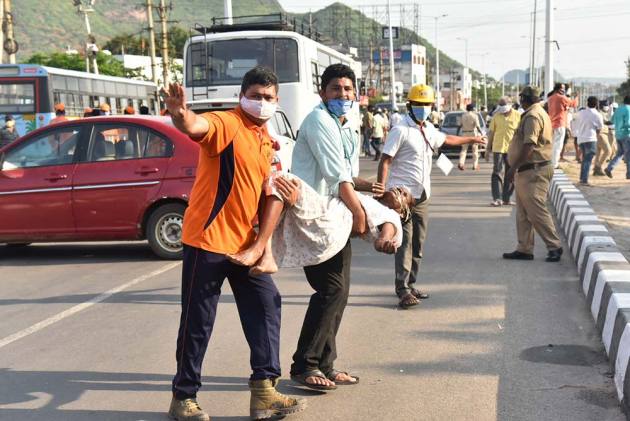 Videos of many people, who were out for morning walk or to purchase goods amidst a lockdown, were affected by the gas leak.  Main thoroughfares of Visakhapatnam were seen with ambulances picking up those who had fainted after inhaling the poisonous gases.

Andhra Pradesh Chief Minister Y S Jagan Mohan Reddy on Thursday announced an ex-gratia payment of Rs one crore each to the kin of those killed in the styrene gas leak.

'Nobody Knew What Was Happening; I Thought I'd Die': Vizag Gas Leak Survivor Recounts Night Of Horror

The leak was first reported at 3:30 in the night, an official told a TV channel. More than a 1,000 people in five surrounding villages, in a three km radius, have reported sick.

A technical glitch in the refrigeration unit attached to the two styrene tanks at a chemical plant caused the vapour leak, a senior district official said quoting a preliminary report.

The Union Home Ministry on Thursday issued an advisory for the public about the things to be done and not be done following such an incident.

Meanwhile, in a statement, the company’s headquarters in Seoul said; “The gas leak situation is now under control and we are exploring all ways to provide speedy treatment for those who suffer from inhaling the leaked gas.”  In a statement it also claimed that the company is investigating the extent of damage and exact cause of the leak and deaths too.

Later in the day, the South Korean Company claimed that the gas leak is well under control. The condition of 12 people is said to be serious,. Sources said that casualties may go up to 30 to 40 as several people are battling for their lives in various hospital.

LG Polymers is a South Korean promoted plant located on the outskirts of the steel city in RR Venkatapuram village.  Residents near the chemical gas plant complained of burning sensation in their eyes and difficulty in breathing, officials said. They were immediately taken to hospital, they said.

The Greater Visakhapatnam Muncipal Corporation also wrote on Twitter: “There is gas leakage identified in LG Polymers in Gopalapatnam.  Reqeusting Citizens around these locations not to come out of their houses for the sake of safety precautions."

On hearing the news, Chief Minister held a high level meeting to review the situation arising out of the gas leak, and instructed the district administration to take all measures to ensure saving human lives.  He also immediately rushed to the Visakhapatnam from Vijayawada in a chopper.

DG Sawang, the Andhra Pradesh DGP, had earlier in the morning said there have been seven casualties in the incident. Later, SN Pradhan, Director General of National Disaster Response Force (NDRF), said the has now reached 11. The plant was shut due to the nationwide lockdown announced in the last week of March.

Styrene gas is a colourless or light yellow flammable liquid primarily used in the production of polysterene plastics and resins.  It is used to manufacture plastics and rubbers, which are used in containers for foodstuffs, packaging, synthetic marble flooring, disposable tableware and moulded furniture.

Also Read: What Is Styrene, The Gas That Killed 11 People In Visakhapatnam. How Dangerous Is It?

Reacting to the unfortunate incident, Prime Minister Narendra Modi tweeted that he had spoken to officials of MHA and NDMA regarding the situation in Visakhapatnam, which is being monitored closely.

"I pray for everyone’s safety and well-being in Visakhapatnam."

Teams of the National Disaster Response Force (NDRF) are on the spot.

Police, ambulances, and fire tenders have been rushed to the area to assist in rescue operations.

Reports said the gas leak has been contained.