Under Article 370, Jammu and Kashmir were permitted to have its own flag, which was red in colour with three equidistant white vertical stripes and a white plough. 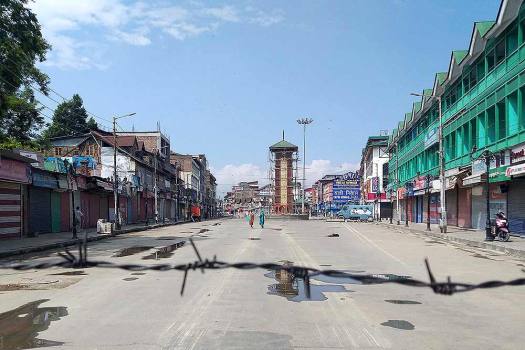 The flag of Jammu and Kashmir which used to fly along with the tricolour was removed from the Civil Secretariat in Srinagar on Sunday, three weeks after the Centre revoked Article 370 provisions which granted special status to the state, officials said.

Under Article 370, Jammu and Kashmir were permitted to have its own flag, which was red in colour with three equidistant white vertical stripes and a white plough.

The flag, which was hoisted along with the tricolour every day atop the civil secretariat, the seat of the government, was supposed to be removed on October 31 when the law bifurcating Jammu and Kashmir into two Union Territories -- Jammu and Kashmir, and Ladakh -- will come into effect.

However, on Sunday morning, only the tricolour was hoisted on the secretariat building, the officials said.

They said the flag will be removed from other government buildings as well.

The flag was adopted by state constituent assembly on June 7, 1952,

The three stripes represented the state's three regions of Jammu, Kashmir and Ladakh.

The Centre had on August 5 abrogated Article 370 provisions in the Constitution which granted special status to Jammu and Kashmir for residency and government jobs. Parliament approved the resolution in this regard and also passed the bill on the bifurcation of the state into two Union Territories.

Later on August 9, President Ram Nath Kovind gave assent to the Jammu and Kashmir Reorganisation Act, 2019, bifurcating the two Union Territories, which will come into existence on October 31.

Since August 5, various parts of the Kashmir valley are under strict restrictions.