A total of 59 people were inside the factory operating from the Anaj Mandi Area when the blaze broke out. 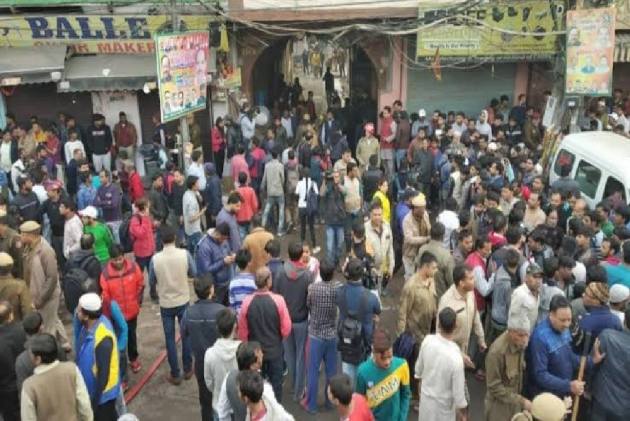 In one of the worst fire accidents in the city, 43 people were killed after a massive blaze ripped through a four-storey building housing illegal manufacturing units in north Delhi's Anaj Mandi area on Sunday morning, police and fire officials said.

Most of the people working in the units were fast asleep when the fire broke out in the second floor of the building in the early hours and 30 fire tenders were pressed into service, fire officials said.

A preliminary probe suggested that short circuit triggered the blaze, they said.

Delhi Police has detained building owner Rehan, who was absconding since the incident and his manager Furkan.

"Owner of the building Rehan and his manager Furkan have been arrested. We are investigating the matter. From the information we have, more or less there is no possibility of more bodies being recovered," said Monika Bhardwaj, Delhi Police DCP North.

Rehan was booked by the police under IPC sections 304 (culpable homicide not amounting to murder) and 285 (negligent conduct with respect to fire or combustible mat­ter).

The Delhi government has ordered a magisterial inquiry into the incident.

Kejriwal has announced an ex gratia of Rs 10 lakh for the families of those dead and a compensation of Rs 1 lakh for those injured in the blaze. He also assured that the government will ensure proper treatment for the injured.

"It's a very tragic incident. The exact numbers of casualties are being ascertained although over 40 have died. Magisterial inquiry has been ordered. The exact cause of fire will be found after the probe. We will ensure the strictest punishment for the guilty," he told reporters.

Earlier in a tweet, Kejriwal described the fire incident as tragic and said firemen were doing their best.

"V v tragic news. Rescue operations going on. Firemen doing their best. Injured are being taken to hospitals," the chief minister said in a tweet.

Nearly 150 fire personnel carried out the rescue operation and pulled out 63 people from the building.

While 43 labourers died, many others were injured including two fire personnel, fire officials said.

They said none of the units had a No-Objection Certificate (NOC) from the fire department and the congested area made rescue operations difficult. Firemen had to cut window grills to access the building.

Prime Minister Narendra Modi announced an ex-gratia of Rs 2 lakh each for the next of kin of those who lost their lives in the fire.

The prime minister also approved Rs 50,000 each for those seriously injured in the fire, his office said.

The amount will be paid from the Prime Minister National Relief Fund, the PMO said in a tweet.

North Delhi Mayor Avtar Singh said he has asked the municipal commissioner to form a team which will visit the site and probe the cause of fire.

Chaotic scenes were witnessed at the site of the fire accident which was clogged with bystanders and politicians arriving in convoys.

Firemen made their way through narrow lanes to rescue those trapped inside the blackened building and carried many unconscious labourers on their backs.

Fire officials said the narrow lanes made it difficult for them to carry out rescue operations.

As the building lacked proper ventilation, most of the people died due to asphyxia.

At the three hospitals where the dead and injured were taken - RML, LNJP and Hindu Roa - distraught relatives had a hard time finding their family members.

Manoj (23), a resident of Begusarai in Bihar, said his brother Naveen (18) was working in a handbag manufacturing unit operating from the premises.

"I got a call from his friend informing that he has been injured in the incident. I have no clue which hospital he has been taken to," he said.

According to an unidentified elderly man whose three nephews were working in the factory, "At least 12-15 machines were installed in the unit. I have no idea about the factory owner.

"My nephews Mohammed Imran and Ikramuddin were inside the factory. I don't know their whereabouts," the man said.

According to him, many units were operating from the premises which was located in a congested area.

Many people trapped inside were rescued and rushed to RML Hospital, LNJP and Hindu Rao Hospital, fire officials said.

Thirty-four people were brought dead to LNJP hospital and smoke inhalation was the primary cause of the death. Some of the bodies were charred, Dr Kishore Singh, Medical Superintendent, LNJP, said.

Out of the 15 injured brought to LNJP, nine people are under observation and others have partial injuries, he said.

Power discom BYPL said the fire broke out due to some "internal system" in the building.

"It appears that the fire started in the internal system of the building," he said.

The electricity meters of the building were placed on the ground floor and found to be intact, he added.

As the news of the fire broke out, a host of leaders expressed shock over the loss of lives in the fire tragedy.

"The fire in Delhi’s Anaj Mandi on Rani Jhansi Road is extremely horrific. My thoughts are with those who lost their loved ones. Wishing the injured a quick recovery," the prime minister said in a tweet.

"Authorities are providing all possible assistance at the site of the tragedy," he said

Congress leaders Sonia Gandhi and Rahul Gandhi condoled the loss of lives in the fire accident.

Punjab Chief Minister Amarinder Singh also condoled the loss of lives in the incident.
"The fire in Delhi's Anaj Mandi is absolutely appalling and horrific. My prayers are with family members who have lost their loved ones and I wish a speedy recovery to all injured," Singh said.

"I express my gratitude to the brave team which is carrying out the rescue operation," he tweeted