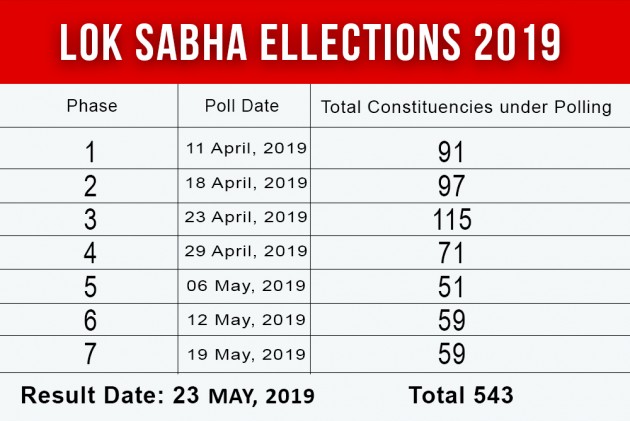 Seven-phase Lok Sabha elections will be held, beginning on April 11 through May 19, with counting of votes on May 23, the Election Commission announced on Sunday.

However, elections for the Jammu and Kashmir assembly, which was dissolved after the ruling coalition between the BJP and the PDP fell apart, will not be held along with the Lok Sabha polls.

Chief Election Commissioner Sunil Arora said the model code of conduct would come into immediate effect from Sunday, and 10 lakh polling stations would be set up this time as against about nine lakh in 2014. Nearly 90 crore voters would be eligible to vote for 543 Lok Sabha constituencies across the country.

The elections will pit the BJP-led National Democratic Alliance against several opposition parties, including the Congress, the Left and regional forces who are in the process of working  out a grand alliance to minimise a division of votes against Prime Minister Narendra Modi-led ruling combine.

Announcing the schedule for 2019 Lok Sabha polls, the Election Commission said the ‘voter verifiable paper audit trail’ (VVPAT) will be used in all polling stations this time.

Counting of votes for all seven phases covering 543 Lok Sabha constituencies would take place on May 23,.

With the model code of conduct for elections coming into immediate effect, the government cannot announce any policy move that may impact voters’ decision.

Chief Election Commissioner Sunil Arora: The Model Code of Conduct (MCC) comes into effect from today itself in the entire country. Any violation will be dealt with in the strictest manner. pic.twitter.com/doAnY6MKQB

The BJP has succeeded in working out seat-sharing formula with some new allies and several old partners, by even making concessions to them in states like Bihar. However, opposition parties are yet to arrive at a deal in several states.

While the NDA is hoping to make history by coming back to power for a second full term, the Opposition wants to unseat the Modi government by raising questions on its performance on a host of issues, including economic growth, employment, corruption and social harmony.

Prime Minister Narendra Modi made a plea to citizens to vote him back to power again, with the hashtag#PhirEkBaarModiSarkar.

Guided by ‘Sabka Saath, Sabka Vikas’, NDA seeks your blessings again.
We spent the last five years fulfilling basic necessities that were left unfulfilled for 70 long years. Now, time has come to build on that and create a strong, prosperous & secure India. #PhirEkBaarModiSarkar

Atal Bihari Vajpayee had led the NDA to back to back Lok Sabha wins in 1998 and 1999 general elections but he was at the helm of only one full-term government.

In 2014, when the BJP swept to power, the Lok Sabha elections were held across nine phases beginning April 7 and ending May 9. The counting of votes had taken place on May 16.

The total contestants in fray were 8,251, with an average of 15 candidates in each constituency. However, deposit was forfeited in case of 7,000 contestants.

A total of over 55 crore voters (66.3 per cent) exercised their vote, while there were 9.27 lakh polling stations. There were nearly 60 lakh ‘NOTA’ votes.

Out of total 543 elected candidates, only 62 were women from 668 who had contested.

After suffering losses in assembly polls in three states recently, the BJP believes that its Lok Sabha poll campaign is back on track due to a host of decisions, including 10 per cent quota for the general category poor, money transfer to farmers and presentation of a populist budget.

What has injected further confidence into the NDA fold is the fronting of the nationalist plank in the poll campaign after the February 14 Pulwama terror attack, which killed 40 CRPF personnel, that was followed by the Indian Air Force' strikes on terrorist camps in Pakistan.

The BJP has been citing 2016 surgical strikes on terror launch pads and the February 26 air strikes to assert that only a government headed by Modi will be capable of taking on Pakistan over terrorism, as it has sought to corner the Congress on the issue.

Many political pundits feel the prime minister has already launched a full-fledged campaign accusing opposition parties of coming together for the sole purpose of removing him while he is working to "remove poverty, corruption and terrorism".

He had led the NDA to a sweeping victory in 2014 as it won 336 of 543 Lok Sabha seats, reducing the incumbent Congress to its lowest total of 44 seats. The BJP on its own won a majority, a first for the party, by bagging 282 seats.