Gujarat's defence PRO in a tweet said the Coast Guard in a joint operation with the state ATS apprehended the Pakistani fishing boat 'Al Huseini' with six crew members on board in the Indian waters. The boat was carrying 77 Kg heroin worth Rs 400 crore. 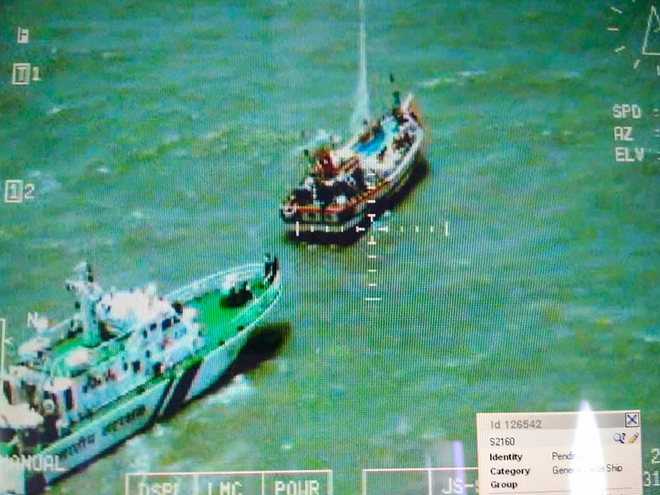 A Pakistani fishing boat with six crew members was apprehended in the Indian waters off the Gujarat coast, officials said on Monday. It was allegedly carrying 77 kg of heroin worth around Rs 400 crore.

In a joint operation Sunday night by the Indian Coast Guard  and the Gujarat Anti-Terrorist Squad (ATS), the smuggled drugs worth Rs. 400 crore were seized.

Gujarat's defence PRO in a tweet said the Coast Guard in a joint operation with the state ATS apprehended the Pakistani fishing boat 'Al Huseini' with six crew members on board in the Indian waters.

They seized "77 kg of heroin worth approximately Rs 400 crore," the tweet said.
The boat was brought to the Jakhau coast in Kutch district of Gujarat for further investigation, it stated.

In April this year, the Coast Guard and the ATS had carried out a similar operation and apprehended a boat with eight Pakistani nationals and carrying 30 kg of heroin worth about Rs 150 crore, from the Indian waters near the Jakhau coast in Kutch.

Last month, the ATS had seized a heroin drug consignment worth about Rs 600 crore from an under-construction house in Gujarat's Morbi district.

The ATS had said the consignment was sent by Pakistani drug dealers to their Indian counterparts via the Arabian Sea.

In September this year, in the single largest heroin haul in India, the Directorate of Revenue Intelligence (DRI) had seized around 3,000 kg of the drug, believed to be from Afghanistan and likely worth Rs 21,000 crore in the global market, from two containers at the Mundra port in Kutch, officials earlier said.