The nine deaths on different trains heading to Uttar Pradesh and Bihar occurred since Monday but were reported by the Railways and civil authorities in the two states on Wednesday. 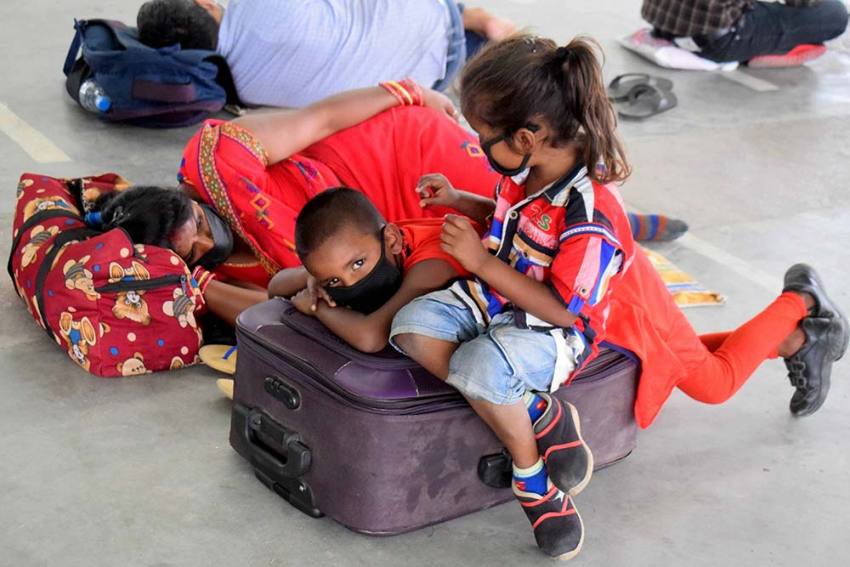 Children along with their migrant family wait to board a bus to reach their native place after arriving from Mumbai via special train at Praygraj railway station, during the ongoing COVID-19 lockdown, in Prayagraj.
PTI Photo
PTI May 28, 2020 00:00 IST 9 Migrants Died On Board 'Shramik Special' Trains Since Monday, Says Railways 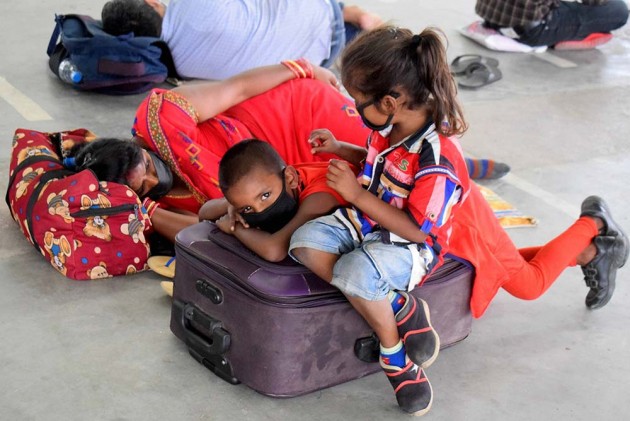 As extreme heat, hunger and dehydration add to the woes of returning migrant workers, nine passengers have been found dead in ‘Shramik Special’ trains since Monday and they included a woman whose toddler son was seen trying to wake her up in a heart wrenching scene at a railway platform in Bihar.

While a few deaths on board the non-air conditioned trains were also reported earlier after they were launched on May 1 to ferry migrant labourers to their home states, the Railways on Wednesday said most of the deceased had pre-existing health conditions.

The nine deaths on different trains heading to Uttar Pradesh and Bihar occurred since Monday but were reported by the Railways and civil authorities in the two states on Wednesday.

A video about the toddler son tweeted by Sanjay Yadav, an aide to RJD leader Tejashwi Yadav, and which has gone viral, shows the child walking unsteadily up to his mother's body, tugging at the blanket placed over her, and when failing to wake her up, covering his own head with it.

As the mother, who was identified as Uresh Khatoon(35), still lay motionless, he wobbles away from her, announcements continuing in the background about the arrival and departure of trains at Muzaffarpur that would bring in tens of thousands of jobless migrant workers hit by coronavirus lockdown to Bihar.

"This small child doesn't know that the bedsheet with which he is playing is the shroud of his mother who has gone into eternal sleep. This mother died of hunger and thirst after being on a train for four days. Who is responsible for these deaths on trains? Shouldn't the opposition ask uncomfortable questions?" tweeted Yadav.

However, police had a different version.

Ramakant Upadhyay, the Dy SP of the Government Railway Police(GRP) in Muzaffarpur, said the incident occurred on May 25 when the migrant woman was on her way to Muzaffarpur from Ahmedabad by a Shramik Special train.

He told reporters the woman, who was accompanied by her sister and brother-in-law, had died on the Madhubani-bound train.

"My sister-in-law died suddenly on the train. We did not face any problem getting food or water," the officer said, quoting the deceased's brother-in-law who he did not name.

The Railways attributed her death to a pre-existing heart condition for which she underwent a recent surgery, also reportedly corroborated by her son.

Another death reported from Muzaffarpur was that of a four-and-a-half-year-old son of a migrant from Bihar based in Delhi. The boy died at the railway station at Muzaffarpur while his father desperately hunted for some milk he believed would have saved his child.

While his father Maqsood Alam alias Mohd Pintu said his son died of heat, Deputy Superintendent of Police, Railways, Ramakant Upadhyay, claimed the boy was ailing for some time and had died before the train that originated from Delhi reached the station.

In Bihar’s Danapur, the body of 70-year-old Basisth Mahato, a heart patient, was taken out of the Mumbai-Darbhanga train. Mahato was returning with his family after treatment in Mumbai and died between Maihar and Satna, the Railways said.

Two migrants were found dead in a train at a Varanasi railway station on Wednesday morning.

North Eastern Railway spokesperson Ashok Kumar said the train had arrived at the Manduadih station of Varanasi from Mumbai's Lokmanya Tilak Terminus at 8.21 am.

They were found dead by GRP personnel, he added.

He said during a medical examination, it was found that both suffered from serious health issues.

One of them, identified as Dashrath Prajapati (30), was a resident of UP's Jaunpur.

He was differently abled and was getting treatment for a kidney-related problem in Mumbai.

The other victim was identified as Ram Ratan (63), a resident of Azamgarh district in UP.

A relative of Dashrath, who was travelling with him, said he had complained of some health problem when they reached Allahabad and then slept.

Dashrath did not wake up when they reached Varanasi, the relative said.

A 58-year-old migrant was found dead in the Surat-Hajipur train on Tuesday evening in Ballia in Uttar Pradesh, Superintendent of Police, Devendra Nath, said.

He has been identified as Bhushan Singh of Saran district in Bihar.

In Kanpur, two middle-aged migrants on a Jhansi-Gorakhpur train were found dead, while they were on their way to their home districts, officials said.

One was identified as Ram Awadh Chauhan (45), while the identity of the other victim hasn't been established so far.

GRP's Station House Officer (Kanpur Central), Ram Mohan Rai, said that Chauhan, a resident of Makraunda in Jahanaganj in Azamgarh, was going from Mumbai to his home town. Chauhan had reached Jhansi from Mumbai by a Shramik train. He boarded another train going to Gorakhpur from Jhansi and he died on the way.

"He was suffering from diabetes," Rai said, adding, he complained having difficulty in breathing and vomited in the train that terrified co-passengers.

A middle aged migrant was also found dead in another train, he said. However, details about him were not immediately available.

The body of Sheikh Salim, 45, a resident of Bahraich (UP), was found on the Vapi-Deen Dayal Upadhayay Junction train when it reached Sagar station in Madhya Pradesh.

"Few deaths have been reported in Shramik Special trains. In most of these cases, it is found that those who died are old, sick people and patients with chronic diseases, who had actually gone to big cities for medical treatment and could come back only after the Railways started these trains," said a Railways spokesperson in Delhi.